Taking a Break at Tinsley

The Sheffield & Tinsley Canal celebrates its bicentenary this year. Chris M. Jones looks at a scene from its working heyday

The view shows the Sheffield & Tinsley section of the Sheffield & South Yorkshire Navigation looking due south at Tinsley Locks. The lock is House Lock, the fourth down the flight. There were 12 Tinsley locks split into three sections: Tinsley Top Locks (the top eight locks), Turnpike Bridge Lock (also known as Plumpers Lock), and Tinsley Low Locks leading directly into the River Dun Navigation. Above and below the lock were two wharves – the one shown here is Tinsley Low Wharf, the one above is Tinsley Top Wharf. Collectively known as House Lock Wharf, both were equipped with two rail-mounted steam cranes. The lock-keeper lived in the castellated gothic-style house, which looks in need of renovation. Tinsley was an important place for keel captains as it was near journey’s end at Sheffield after a long climb from the Humber ports, or the beginning of the long descent on the return trip. Those heading towards Sheffield were towed by a ‘horse marine’, o… 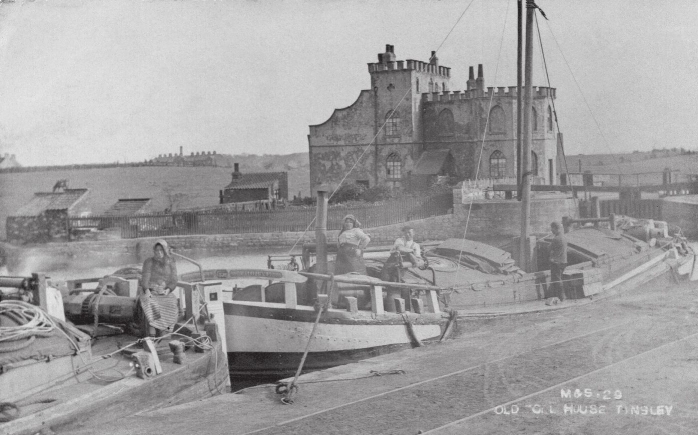