British Waterways: Northbound on the GU

For much of the 1950s, George Jackson and his family were working Titania and in 1958 they had the motor Kenilworth, a large Northwich craft. Both boats were originally part of the Grand Union Canal Carrying Company fleet that had been nationalised in the post-war years. Titania was one of their ironcomposite star-class boats built by Harland & Woolf of Woolwich in 1935 with a smaller depth in the hold than the all-steel motor. As the motor has drawn level with the butty’s fore-end, the captain has grabbed the snatcher and is about to drop one end over the towing stud at his feet before going on to Lock 11 that is just visible on the left, which has been opened in readiness. Today the M1 runs through the fields along the line of the wooden fence in the distance and there are more hedges and trees than shown here, but unfortunately none are elms. The telegraph poles that remind us that the Grand Union was a major transport artery are still in situ, only carrying mains electri… 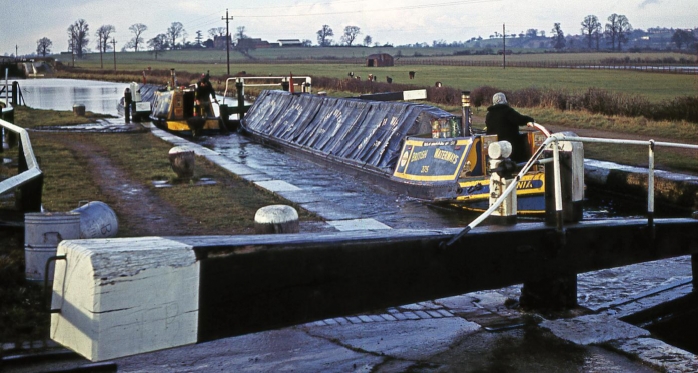