Chris M. Jones studies the details of a pre-WWI image showing a broad-beam boat on the Grand Junction Canal at Cassiobury Park

Wide-boats were a common sight at the southern end of the Grand Junction Canal, seemingly preferred by their owners to pairs of narrowboats, in spite of carrying less weight. Running such craft was clearly economically viable, perhaps because they required fewer crew members to operate them than their narrow-beam siblings. This photograph, taken at Cassiobury Park Lock (No 76), shows the wide-boat Integrity owned by Emanuel Smith of Brentford. She was built in the autumn of 1901 for James Peasland of Cowley, who had two wide-boats in his ownership early in 1899 named James and Perseverance. Peasland operated as an independent contractor over the lower Grand Junction area, transporting brick-making and other materials, mainly in Middlesex. Two more followed: Integrity in 1901 and Perseverance in 1903. His original Perseverance of 1899 was renamed Thrifty about that time. With these four wide-boats, Peaseland continued trading until early in 1907 when he bought a pair of narrowboats. G… 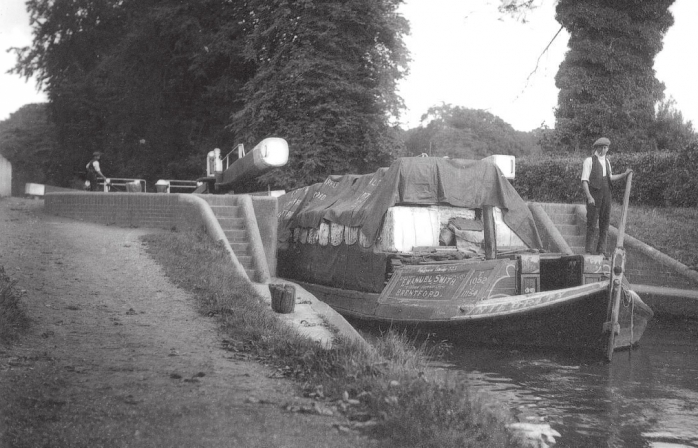