Barging From the Port of Rye

Chris M. Jones looks at an early 1900s image showing a Rye barge on one of several inland navigations that once ran into the River Rother in Kent.

It is said that every picture tells a story and it is certainly the case with this fascinating image from the turn of the 20th century. This rural scene shows the village of Small Hythe in Kent on the main road between Tenterden and Rye. It was the extreme head of navigation for the only trading vessels capable of reaching this point, the Rye barges. The navigation was a man-made cut with the unattractive name of Reading Sewer. From Small Hythe it led to Potman’s Heath Wharf where it joined the Potman’s Heath Channel, which in turn fed into the River Rother. The Rother was one of several navigable rivers that all flowed into the Port of Rye in Sussex. North of Rye the Royal Military Canal joined the Rother at Iden Lock, which also accommodated a small amount of commercial Rye barge traffic. These low marshy lands had been extensively drained through an oldestablished system of sewers and channels dating back hundreds of years, and legally enforced by obliging landowners … 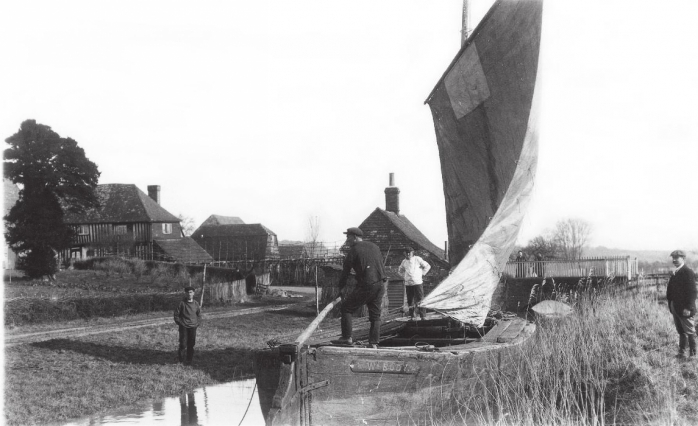