Picturing the Past: NarrowBoat, Summer 2018

Chris M. Jones looks at the history of a humber keel depicted in an early 20th-century photo of the Sheffield & South Yorkshire Navigation

Yorkshire had many commercial canals and rivers and this early 1900s photo is taken looking north-east on the Mexborough New Cut section of the Sheffield & South Yorkshire Navigation at Swinton Bridge. On the right can be seen the passenger footbridge at Swinton Station, situated on the Sheffield & Mexborough Branch of the Great Central Railway. The canal bridge allowed access to the station via New Station Road, whose houses appear on the left. There were two Swinton stations in the vicinity, the other being on the Midland Railway a short walk from this scene, passing through the town and crossing the Dearne & Dove Canal above Swinton Locks.Bow-hauling activity The activity of the boaters has caused some interest from the locals on the bridge, behind which can be seen the cylindrical top of a kiln in the nearby disused Don Pottery. The man bow-hauling the keel, Ivy, may well have towed her from the bottom of Swinton Lock about 400 yards away, and the high freeboard of th… 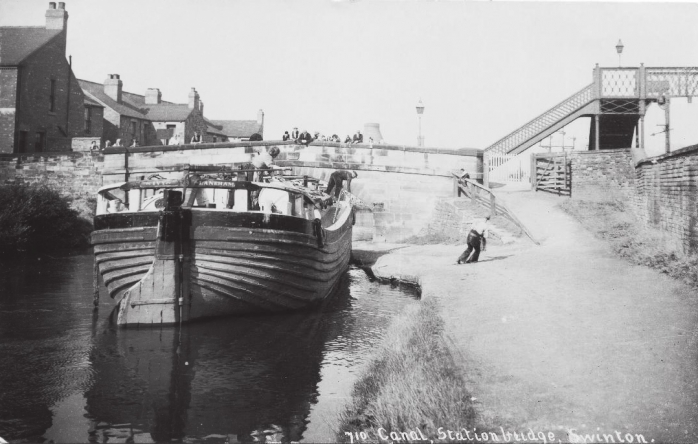