Canals That Never Were: NarrowBoat, Autumn 2017

Richard Dean explores the abandoned schemes for links from Surrey to London and Croydon via the Thames.

Despite its proximity to the capital, the part of Surrey nearest London has never seen a great deal of canal building. Proposals were made in 1778 for a canal from Ewell to the Thames at Kingston which did not progress, but the idea reappeared in the 1790s as part of Ralph Dodd’s scheme for an extensive canal serving the northern part of the county, reaching from the Thames at Rotherhithe to Kingston, with branches to Epsom, Croydon, and several shorter ones near London.

At the same time rival schemes were being projected for a canal to Croydon: one from the Thames at Wandsworth up the Wandle Valley, the other on a more easterly direct route from London through Deptford and Penge. Anticipating water supply problems, the Wandsworth projectors decided to adopt a tramroad instead, and their pioneering Surrey Iron Railway opened in 1803 including a short canal – which was really an extended dock – at Wandsworth.

Dodd’s scheme, christened the Grand Surrey Canal, was authorised by Parliament in 1801 and included all the shorter branches. However, opposition curtailed the main line at Merton, with only a stub of the Croydon Branch being built as far as Mitcham. The weakest part of the project was the need for a short summit level at Tooting, which would not only necessitate the building of a tunnel or deep cutting, but inclined planes, rather than locks, due to the scarcity of water. The new company initially concentrated on building the London end of the canal, which was completed to Camberwell in 1810. Work stopped here, as constructing docks at Rotherhithe was proving far more lucrative than canals, and nothing further was done apart from completing the short Peckham Branch, which opened in 1826.

The Grand Imperial Ship Canal of 1827 (NB, Summer 2009) would have covered much the same territory as the Grand Surrey proposals and would have had a major impact on the completed part, but it did not come to fruition. The GSC was briefly interested in completion of its westerly connection to the Thames at Vauxhall in 1835, with some associated railway links, but the company was now effectively a dock business and the canal simply an extension of the dock system.

The easterly scheme for the Croydon Canal was intended to leave the Thames at the same point as the Grand Surrey Canal. To avoid duplication, the Croydon promoters agreed to abandon their own proposed Thames link and join the GSC where the two routes intersected, an arrangement that was to cause friction later. After vacillating between locks and incline planes, they finally opened their waterway to Croydon in 1809 with 28 locks. Profits were not spectacular and the opportunity was seized in 1836 to sell the canal for railway conversion.

Following closure of the Surrey Iron Railway in 1846, the industries in the Wandle Valley had to rely on road transport. A scheme was prepared in 1865 for extending the short canal at Wandsworth up to Wimbledon, but it met with opposition from the then owner, and a similar project two years later, with independent access to the Thames, also failed. 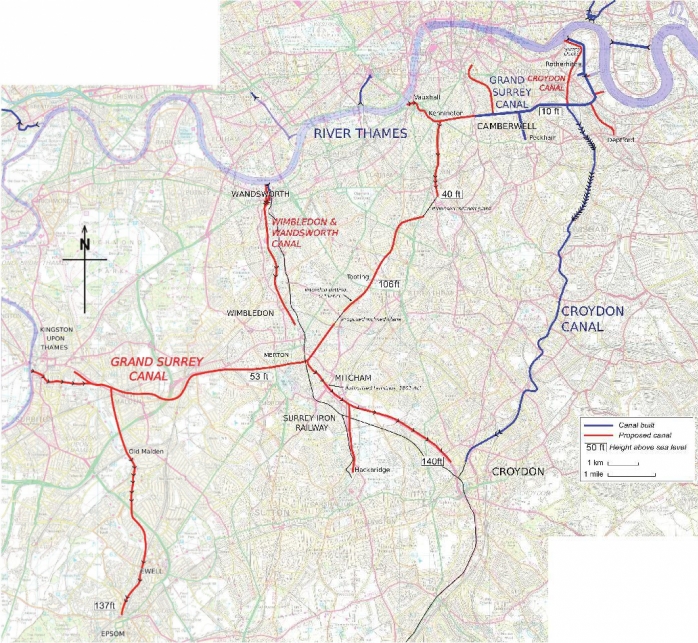 Dated 1845, this sale plan shows the land in Kennington originally purchased for the Grand Surrey Canal, which became surplus after the ambition to extend the route was abandoned.