Canals That Never Were: NarrowBoat, Autumn 2016

Richard Dean looks at an 1824 proposal for a 39 mile trans-Pennine waterway connecting Manchester and Sheffield. 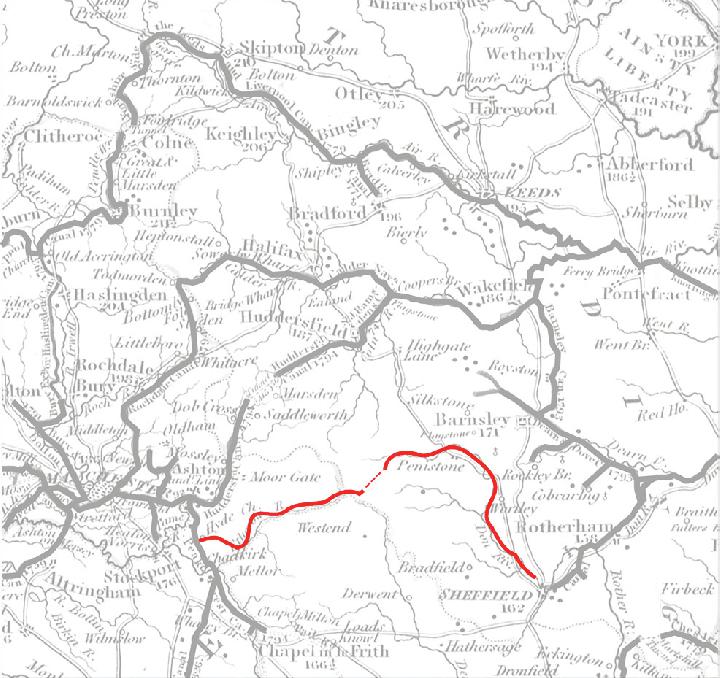 The location of the proposed Sheffield & Manchester Junction Canal overlaid on part of Smith’s 1821 map of canals.

The growing interest in canal schemes across the Peak District in the early 1820s (Winter 2008 and Spring 2009 NB) prompted Sheffield interests to consider the shortest possible route to connect with Manchester by following the Don Valley through Penistone and Woodhead. The Sheffield firm of surveyors W. & J. Fairbank was employed to investigate and measure the route, with Thomas Telford engaged as consultant engineer.

Telford’s report of January 1825 acknowledged that “the summit is unavoidably much elevated” and detailed a line just over 39 miles long with 80 locks rising 800ft to a summit tunnel at Woodhead, then falling 652ft by another 66 locks to join the Peak Forest Canal at Hyde, including a 7-mile intermediate levelthrough Tintwhistle and Broadbottom. There was no provision for a junction with the Sheffield Canal. Telford estimated the cost for a narrow canal at £414,278, rising to £499,231 for a barge route – but he did not mention that the ongoing connection to Manchester was narrow.

The tunnel at Woodhead would have been nearly 2½ miles long, considerably less than Standedge on the Huddersfield Narrow Canal, but the summit level at 960ft above sea level was far higher, and would need six new reservoirs to feed it. Telford seems to have favoured lowering the summit by 200ft to reduce the lockage, ease the water supply situation, and considerably speed up passage through the canal. However, this would lengthen the tunnel to about 6 miles, increase constructiontime, and add 50% to the overall cost. As such, it did not find favour among the promoters.

Although Parliamentary plans had been deposited in November 1824, no Bill followed, and there was much discussion over the next two years about the best location for another trans-Pennine crossing as the economic situation worsened. The building of the Cromford & High Peak Railway showed that there might be an alternative to an expensive waterway. By the time the financial situation improved, railways had demonstrated their worth, and there was no appetite for major waterway investment. The Sheffield Ashton-under-Lyne & Manchester Railway, promoted in 1836 and opened throughout in 1845, followed a very similar route to the earlier canal proposal. 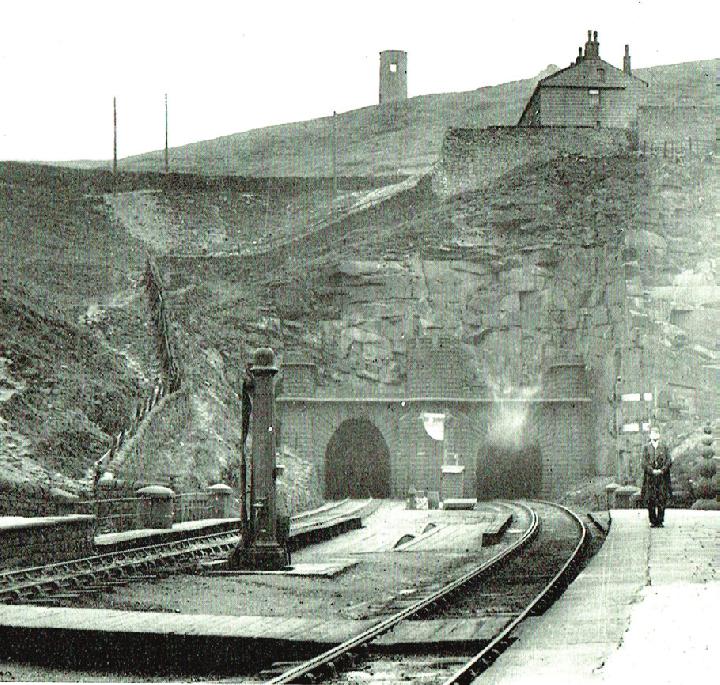 The railway tunnel at Woodhead, built about half a mile north-west of the intended canal tunnel.

The Peak District (Canals That Never Were)

Derbyshire Connections (Canals That Never Were)