Canals That Never Were: NarrowBoat, Spring 2017

Richard Dean details the Ellesmere Canal’s missing northerly link to the city of Chester. But why was it never built? 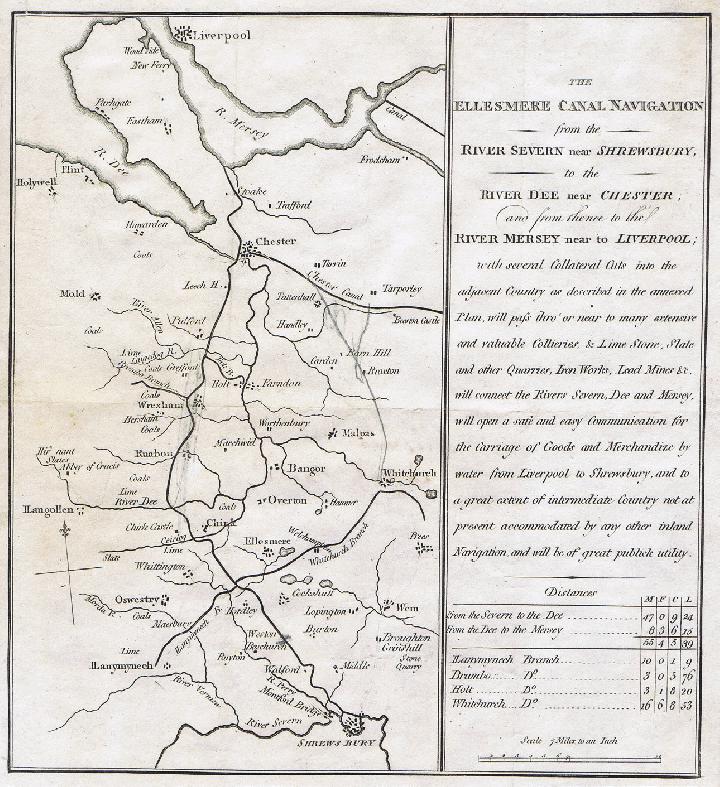 A contemporary engraved sketch map of the proposed canal c1793.

As was demonstrated in the waterway profile in the Summer 2006 issue of NB, the history of the Ellesmere Canal is complex. Originally conceived as a trunk route, of barge width, connecting the rivers Severn, Dee and Mersey, as the project developed, this ambition was largely replaced by the practical needs of local industry and agriculture, which were better accommodated by a narrow canal through the expanding industrial area of east Denbighshire.

By 1792 the engineer John Duncombe had produced a survey, approved by William Jessop, which had a long summit level south of Wrexham, fed mainly by various streams in Shropshire. This was only possible with a 4,000yard tunnel under Ruabon and a 127ft-high crossing of the Dee Valley at Pontcysyllte to maintain the elevation.

Although this survey was used to obtain the 1793 incorporating Act, the promoters had already decided on a more cautious approach by having locks down each side of the valley at Pontcysyllte, with the severed northern part of the summit level raised to avoid tunnelling. This would also ease access to the collieries around Acrefair, and enable the main line to approach nearer to the industrial area north-west of Wrexham, which Duncombe was serving by a heavily locked branch up to Brymbo. Feeding this and the raised summit would be difficult, and, in anticipation of the changes, a northerly extension of the Brymbo Branch to Frith had been hurriedly added to the deposited plans for the Act. But how the water was to be brought into the main line is not clear as the proposed intake from the River Cegidog was 180ft below the highest part of the branch. 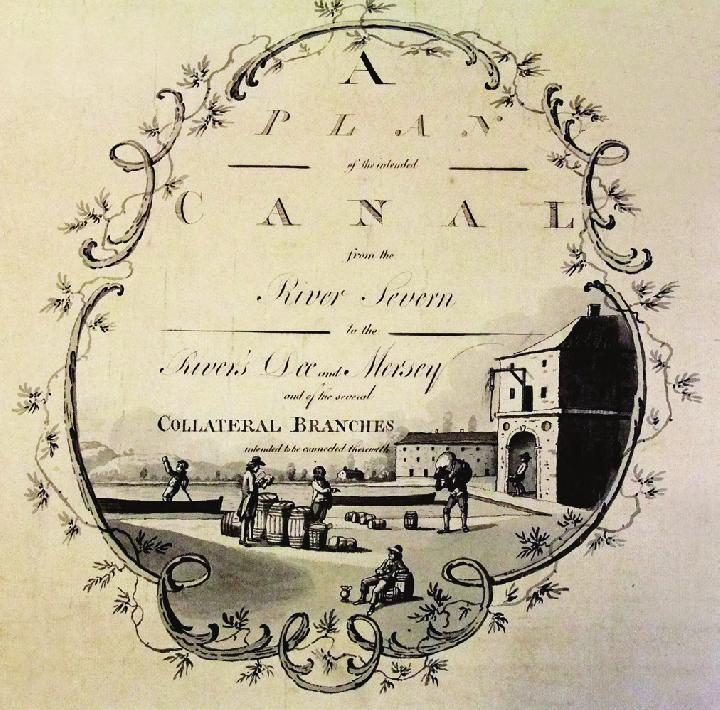 Decorative cartouche to John Duncombe’s survey of the proposed canal, 1792. 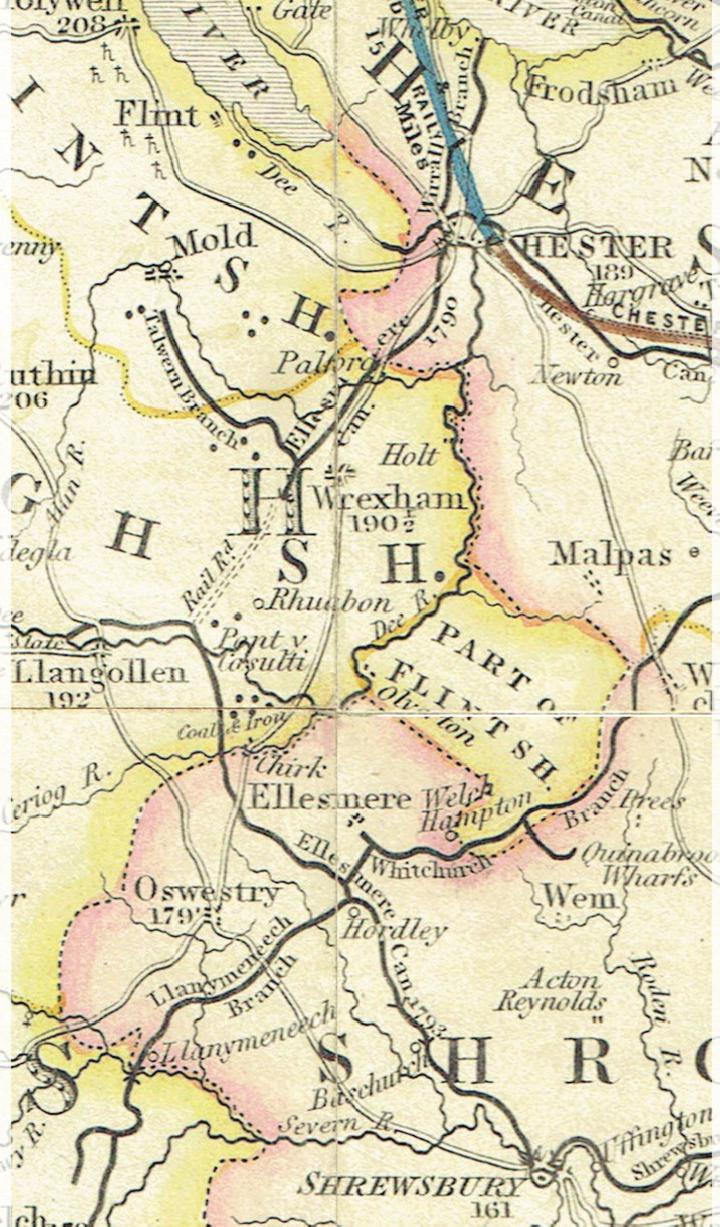 Many general maps showed proposed canals as completed, long after they had been abandoned. This example is an extract from Smith’s map dated 1838, with some unbuilt parts of the Ellesmere still not deleted. 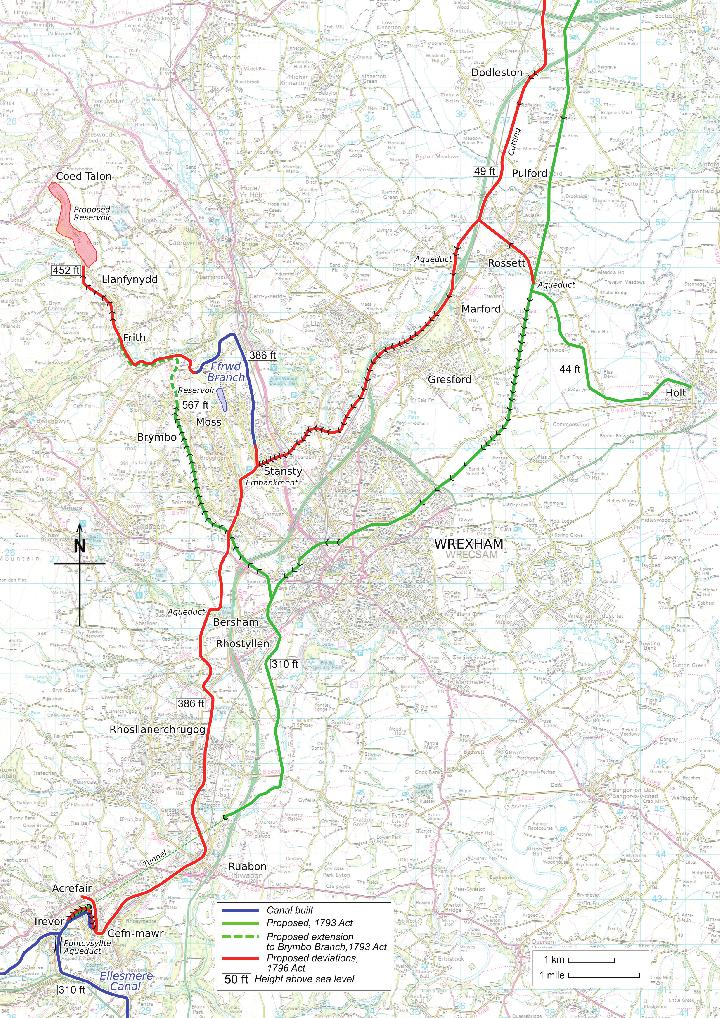 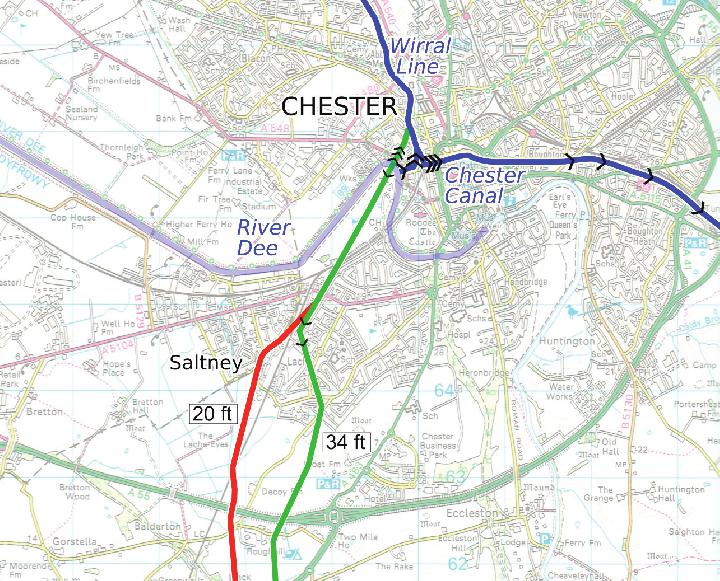 The relatively easy part of the canal across the Wirral between the Mersey and the Dee was soon in hand, but for the remainder of the scheme two years of uncertainty followed. Much time and effort were expended on surveying and replanning almost all of the route as competing interests swayed the canal committee in differing directions. Matters were partly resolved with the beginning of work in Shropshire on Duncombe’s authorised route (although the final length down to Shrewsbury was never made, as described in Winter 2006, NB) and the decision to build Pontcysyllte Aqueduct at the full height using an iron trough.

A deviation Act in 1796 finally authorised major changes in the northerly route to Chester with locks at Cefn-mawr taking the canal up to a 386ft summit level, obviating the need for a tunnel and allowing a short branch to the collieries. The line then moved westwards to reach Stansty, from where lockage down the Alyn Valley brought it to Rossett, and then across Cheshire to rejoin the authorised line at Saltney. A spur from Rossett connected with a branch to Holt that had formed part of the 1793 enactment. The summit was to be fed by the rather circuitous Ffrwd Branch, avoiding the high ground around Brymbo, and supplied from a new 200acre reservoir to be created by a dam along Offa’s Dyke at Llanfynydd. Part of this branch was built, together with a smaller reservoir at Moss, although it is not clear if it was ever used (see Spring 2007, NB).

Work ceased on the Ffrwd Branch in 1798 as the financial climate worsened, and the company considered building tramroads as a cheaper option to canals. Any further aspirations to reach Chester by the Denbighshire route soon faded, with Jessop pointing out in 1800 that the expansion of the Hawarden collieries with their tramroads to the Dee meant coal could reach that city much more economically than by the proposed canal. In the words of the company’s 1805 report:

...the great quantity of lockage, which would have been required upon this part, and the difficulty and expense to have been incurred in procuring a sufficient supply of water upon that high and short summit, made it evident that a canal navigation through that district would be perfectly unadviseable.

As such, a tramroad was built to serve the nearby collieries from the basin at Trevor north of Pontcysyllte, and the short private Plas Kynaston Canal was later made from the same point. Further canal construction in the area was limited to the feeder branch from Trevor to the River Dee at Llantisilio, which supplied the southerly parts of the canal in lieu of the intended reservoir. 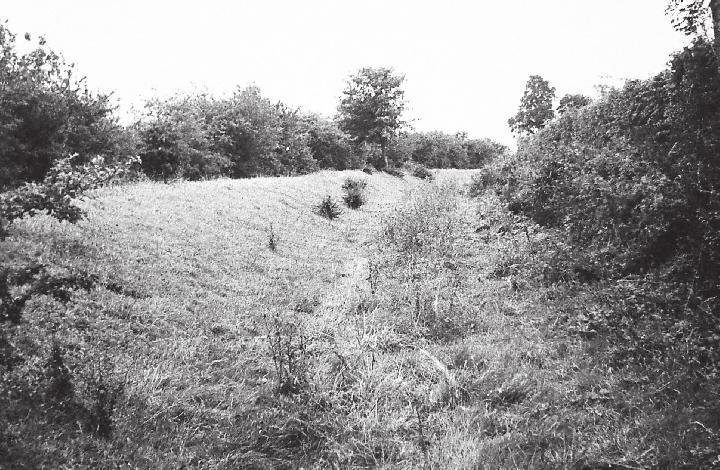 Part of the unfinished Ffrwd Branch, photographed in 1963. 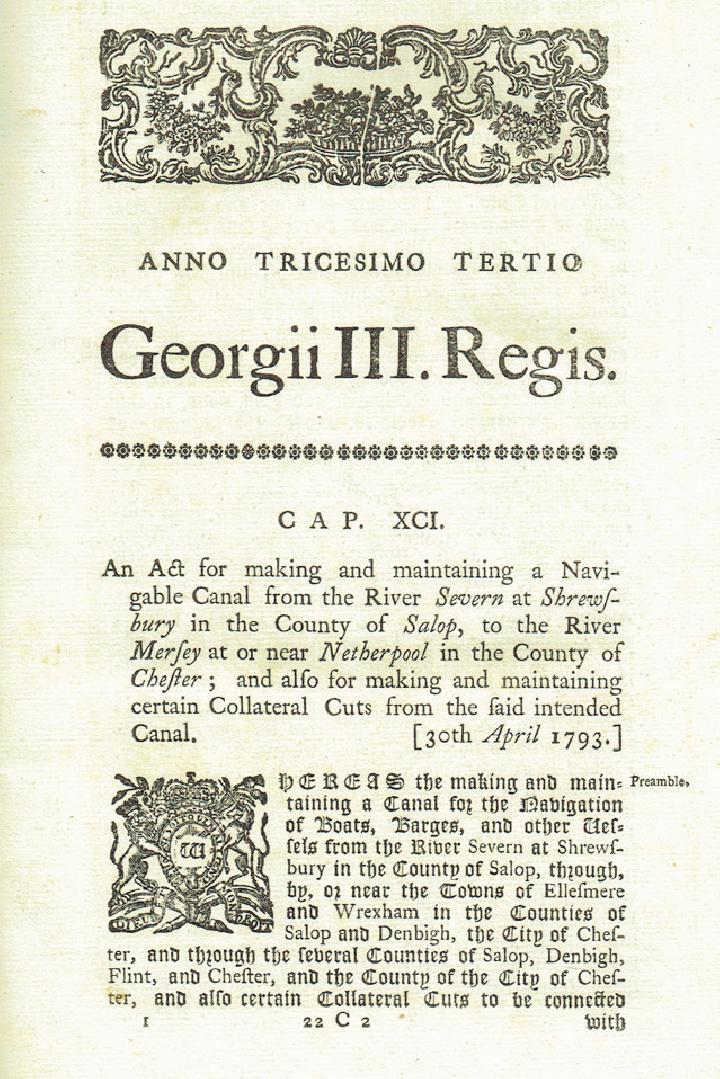 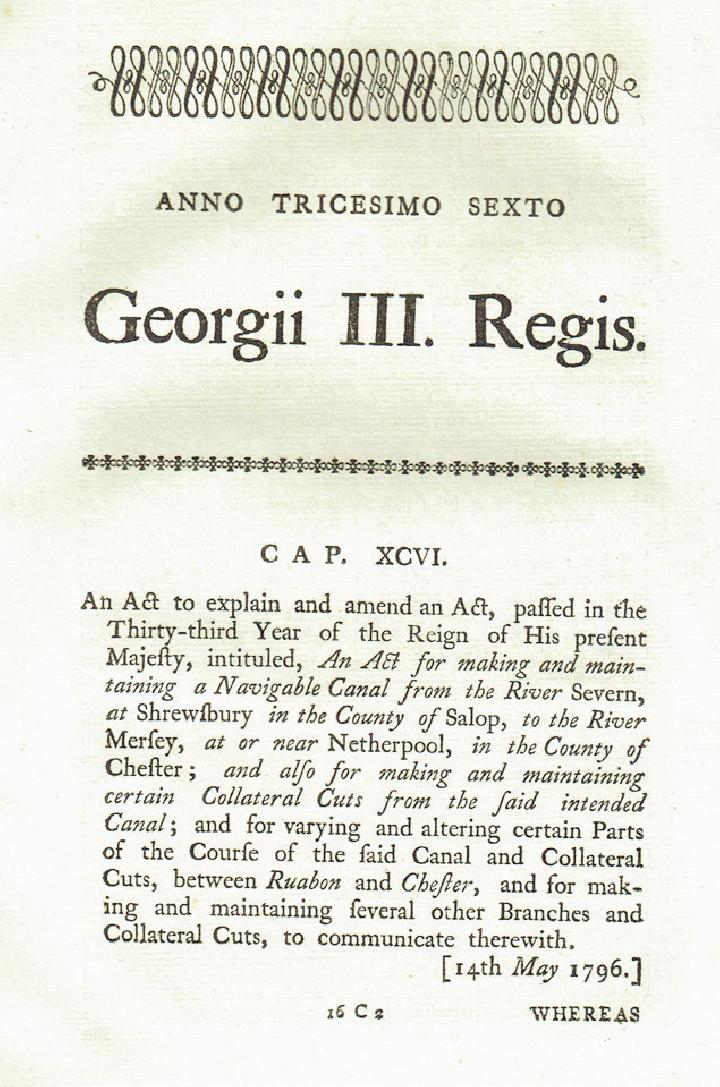 The 1793 Act authorising the Ellesmere Canal, and the 1796 Act for deviations north of Pontcysyllte.