Picturing the Past: NarrowBoat, Summer 2016

This photograph shows a pair of narrowboats ascending Devizes Locks on the Kennet & Avon Canal at Caen Hill. In the background, on the right behind the boat horse, can just be seen the quarry escarpment of Caen Hill Brick Works, surrounded by open farmland. On the right is Caroline, which, judging by her tall towing mast, is the lead craft. The unidentified butty has no mast and would have been towed from her fore-end stud. The cargo is converted or sawn timber planks, most likely imported through Bristol Docks, and the towing mast has been moved from the usual position at the mast beam to the forward beam to allow large lengths of planks into the hold. It was quite common to rig a boat this way when carrying bulky timber. Caroline’s owner is William Escott who was born in Melksham in Wiltshire in the early 1850s. His parents were poulterers at Melksham, so, unlike many owner-boatmen, he didn’t come from a boating background. He married Caroline Bolwell in 1878 and th… 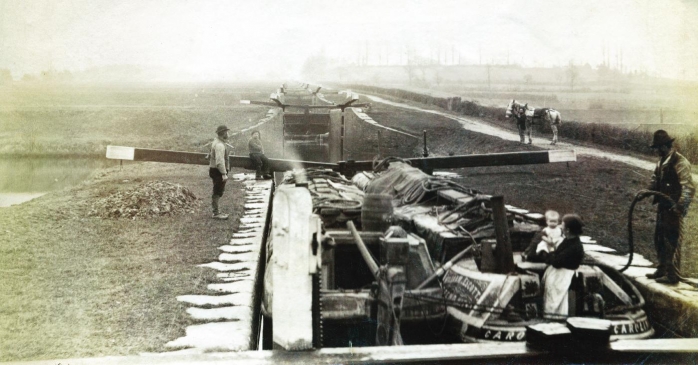