James Hewitt recalls the use of paddle trunks and box trunks

Water is that slightly magical element on which our canal system depends. The engineers had to give a great deal of thought towards collecting it in reservoirs throughout the system. Some of these are very large, such as Rudyard Lake which supplies the Caldon and Trent & Mersey canals. But reservoirs are not the only source of water. Some of it comes from the land itself, the quantity depending upon the terrain through which the canal passes – also upon weather conditions.

If we imagine a canal running through ground which is higher than the canal, it is easy to see where the water will go during a period of intense rain, depending on how waterlogged the ground is. Provision had to be made to prevent the canal overflowing its banks.

Travelling around the system, the intrepid navigator will sometimes see a spill weir intended to take some of this excess – but in very wet conditions that is not always enough. Installations are needed so that water can be quickly run off if damage is to be avoided. Engineers refer to these as ‘let-off valves’ and when I was working for British Waterways we had to sign a form every Friday to say that they were all closed – sending it into Northwich along with other engineering reports.

On the Marple section where I was employed, they would always be referred to by the workforce as ‘paddle trunks’ (see illustration) although the design could vary elsewhere. A culvert from the centre of the canal leads to a brick-lined well, part-way across which is a set of stop planks known as ‘well hole planks’. These effectively isolate the canal water but there is a ground paddle on the other (non-canal) side where the post itself would be referred to as a ‘jackhead’, locally at least.

If it was decided to open the trunk to prevent over-topping, the well hole planks would simply be pulled out, flooding the rest of the well, and the paddle then opened as required. Once levels were back to normal the paddle would be lowered again and the well planks re-inserted. They never made a perfect seal, with water spurting between each plank. To overcome thisthey were all chamfered or bevelled along their lower edge so as to form a ledge with the one below. Earth would then be shovelled in from the canal side, to be drawn in until everything was sealed. Dry ash from a boat cabin fire was also very good. The same process would be used with full-size stop planks in a process we knew as ‘racking up’.

Why bother with well hole planks anyway? Why not simply open the paddle if water control was needed? This might indeed be done if the trunk was used fairly often and in a secure location where it could not be tampered with. The need for water control usually happened in very rainy weather with the water controller only interested in opening up as quickly as possible before retreating to a cosy fireside. Most of them would rarely be opened but if left full a growth could form on the iron frame up which the paddle slid, making it difficult to open. For this reason we usually left the well planks inserted which could be turned to advantage. 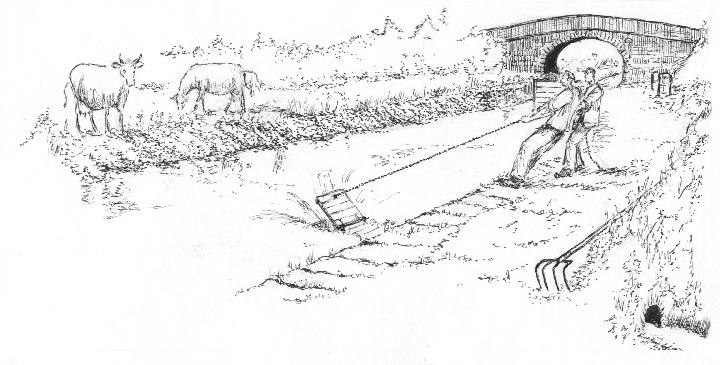 Edward Paget-Tomlinson’s drawing of a box culvert being opened in an already partly drained canal. In reality, the amount of silt and debris on the lid plus the weight of the water would often require more than two men to open these when the canal was full. The culvert outlet is seen beneath the towpath to the right. 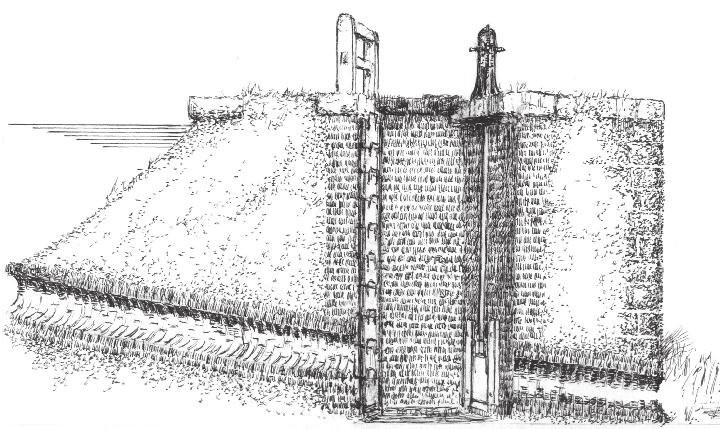 Edward Paget-Tomlinson’s drawing of a paddle trunk, showing the culvert from the canal on the left of the brick well chamber. When not in use, the water to the left of the stop planks would be level with the canal but the well to the right would be empty. By prising up the top plank with the paddle closed, the levels would equalise. Then, when the top plank was removed, the rest would float up. Once all the planks were removed, the paddle would be opened to lower the water level.

Culverts tend to fill up with silt if there has been no flow through for some time and the canal is in need of dredging. One way of getting around this would be to make the well planks only slightly higher than the canal itself so that if the level rose it would cascade over, causing a current that would hopefully keep the culvert clear, to find its way around the unpressurised paddle.

Even so, a blockage could sometimes occur but we had evolved a simple technology to overcome this. We would connect the outlet pipe of a 2in pump to a long length of scaffolding tube and feed this up through the opened trunk like a sort of lance in order to wash the silt out. It always worked – the culvert releasing its contents without warning and men had to be quick at getting out of the way.

Our section was one of seven controlled by the area engineer and his staff based at Northwich on the River Weaver, the others being Weaver, Potteries, Fradley, Norbury, Ellesmere and Chester. During periods of heavy rainfall Northwich wisely left each section to deal with it themselves, since everyone knew their own waterways best.

There was nothing haphazard about the business of water control. Certain men such as lock-keepers and reservoir attendants were deemed to be ‘operational’, which meant they could be called out at any time. This may sound a little harsh, but it had to be that way for the canal does not keep normal working hours. I should add that British Waterways never had any trouble in calling their men out after hours, whether they were operational or not.

There were two length foremen – at Marple and Macclesfield – who in effect made all decisions when the canal level rose. A rain gauge had been installed at Bosley, which they would consult before opening up; long experience had taught them how much water to expect. The person in overall charge of this should have been the section inspector, but in our case hehated having to turn out after hours for any reason and left such matters as water control to his foreman. Unfortunately it all came unstuck; something went badly wrong and there was an enquiry with responsibility being given to somebody else.

Venturing a criticism against senior management here, they often preferred to harangue an errant supervisor rather than demote or even fire him, which might have been a kindness in the long run. One would imagine that running a canal would be a tranquil affair with procedure governed by long years of tradition. Not a bit of it! Sometimes the little section office would be the scene of spectacular rows, often about some trivial thing. During the days of railway ownership the office had been an artist’s studio where scenes would be painted – to adorn the walls of railway carriages.

Turning now to another type of installation: the ‘box trunk’. This is simply an all-or-nothing device which is intended to drain the canal quickly. A heavy wooden box is sunk into the canal bed and connected to a culvert. The box has a lid with a long chainattached which lies on the bottom of the canal. In order to open it, the men simply fish around for the chain and haul lustily away – which is not as easy as it sounds.

On one occasion, no less than four of them were tugging away without success until I loaned them a set of chain blocks. I have even seen a roller and handspike arrangement on the water wall of one canal in order to ease this task. The chains can present something of a problem when the canal is being dredged, since it is not unknown for a dredger to open one by accident. I can remember two being opened on the Peak Forest Canal, but I never went to any on the Macclesfield.

What does the word ‘trunk’ mean? A dictionary tells us that it is a ‘chute or conduit’. Grahame Boyes and the late Brian Lamb in the excellent book The Peak Forest Canal & Railway, quote the programme of work for annual stoppage on 4th–9th May 1834, which lists amongst many other items “A new trunk to be put in at Bugsworth”. Finally there does not appear to be a standard terminology used by canal men throughout the system, as distinct to that used by engineers, even on the narrow canals. 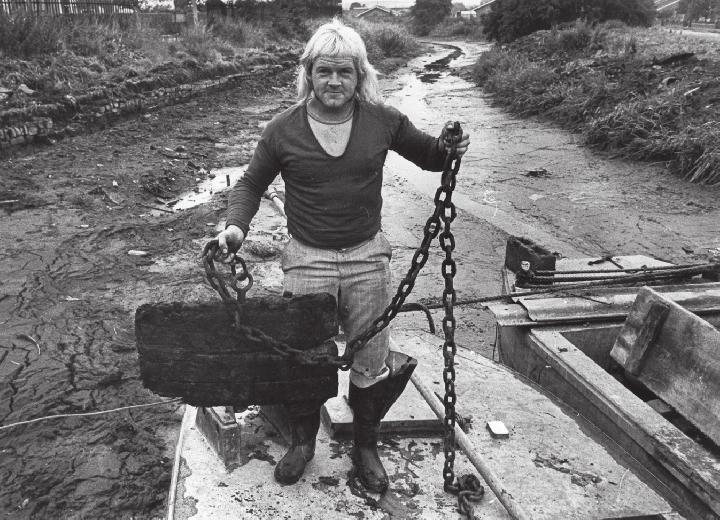 British Waterways’ Bill Thorpe gained nationwide fame when he unknowingly ‘pulled the plug’ whilst dredging the Chesterfield Canal between Town Lock and Whit Sunday Pie Lock at Retford back in 1978. The location of the box culvert had not been previously known. As well as being well covered by the local press, the story and photograph appeared nationally in the Guardian. 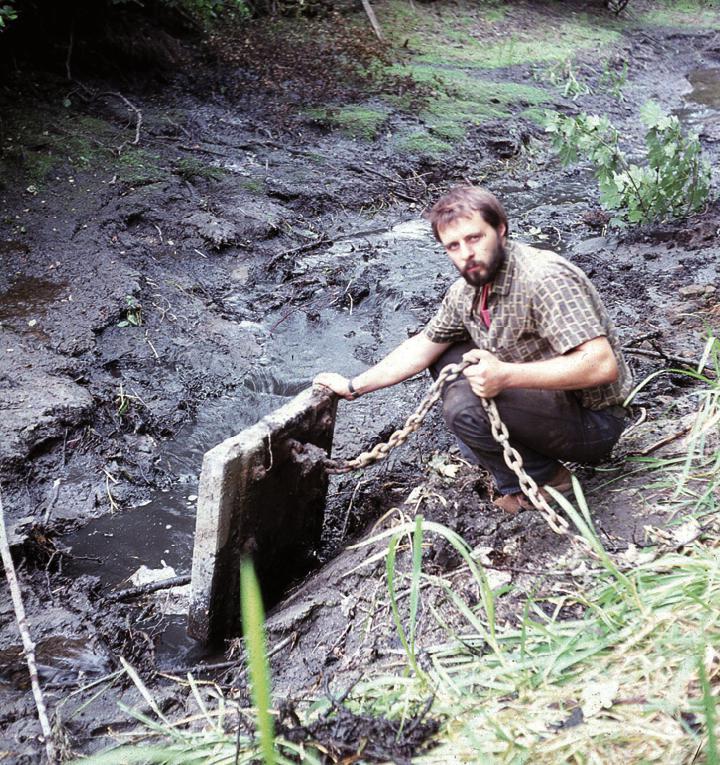 Keeping the Water in (Traditional Techniques)