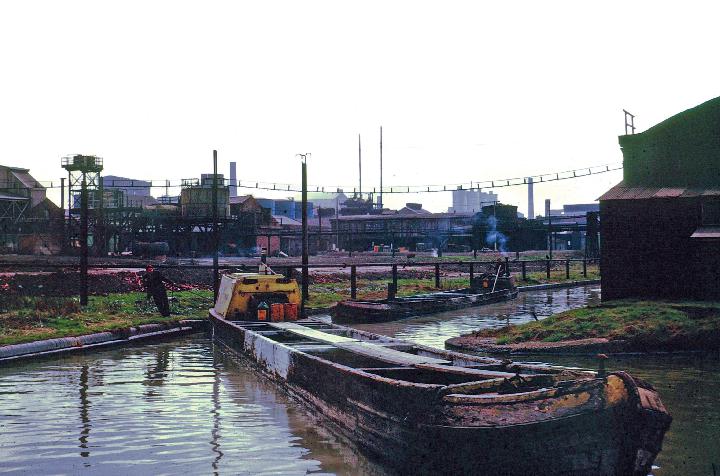 Matty’s motor boat Maureen and a laden day boat emerging from Chemical Arm at Oldbury, on the BCN Old Main Line in April 1964. 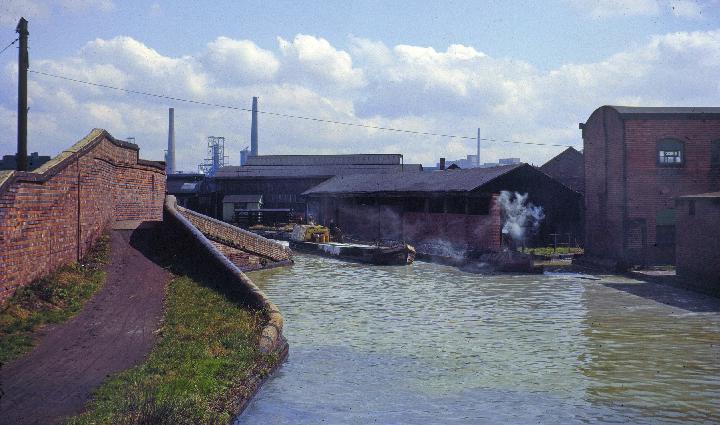 I had always thought that ‘Tank House Slime’ sounded to be a noxious cargo, but it turned out to be a valuable by-product carried neatly, tidily and cleanly in barrels (Winter 2012 NB). However, the phosphorus waste traffic from Albright & Wilson’s works, located beside the appropriately named Chemical Arm of the Birmingham Canal’s Old Main Line at Oldbury, was definitely noxious.

Phosphorus is an essential element for life, and can have almost magical connotations, with derivative words like phosphorescence, but there was nothing magical about the waste product carried by Alfred Matty’s Coseley-based fleet of motor narrowboats and open day boats.

Various phosphorus ores and compounds were brought by canal to Oldbury by carriers such as Fellows, Morton & Clayton, Severn & Canal Carrying Co, the Bridgewater Trustees and the Grand Junction Canal Carrying Co, depending on the date. These boats usually went up ‘The Crow’ (Titford Locks) to Albright & Wilson’s basin. The finished products such as the phosphorus and other by-products were collected at the end of the Chemical Arm on the Birmingham Level.

The waste that this article is concerned with was carried out of the Chemical Arm, along the Old Main Line, down Brades Locks on the Gower Branch and a short distance along the New Main Line to the former Rattlechain Colliery site just before the Netherton Tunnel Branch at Dudley Port Junction.

A large lagoon here was created from the subsequent clay pit worked by Samuel Barnett to supply materials for his Rattlechain & Stour Valley Brickworks. On 9th September 1899 the canal burst its banks here, flooding the clay pit to a depth of 300ft, draining 6 miles of canal and creating a 3-acre lake that became something of a tourist attraction at the time.

In the 1940s, Albright & Wilson obtained use of the pit as a waste-disposal facility. Until around 1973 the company tipped industrial waste into it including the infamous phosphorus. The first boat regularly employed on this trade was the ‘Small Rickmansworth’ motor Maureen (ex GUCCCo Electra). She was docked extensively in around 1973 and from then on the traffic seemed to be in the hands of the ‘Large Northwich’ Stratford and the ‘Large Woolwich’ Aldgate. 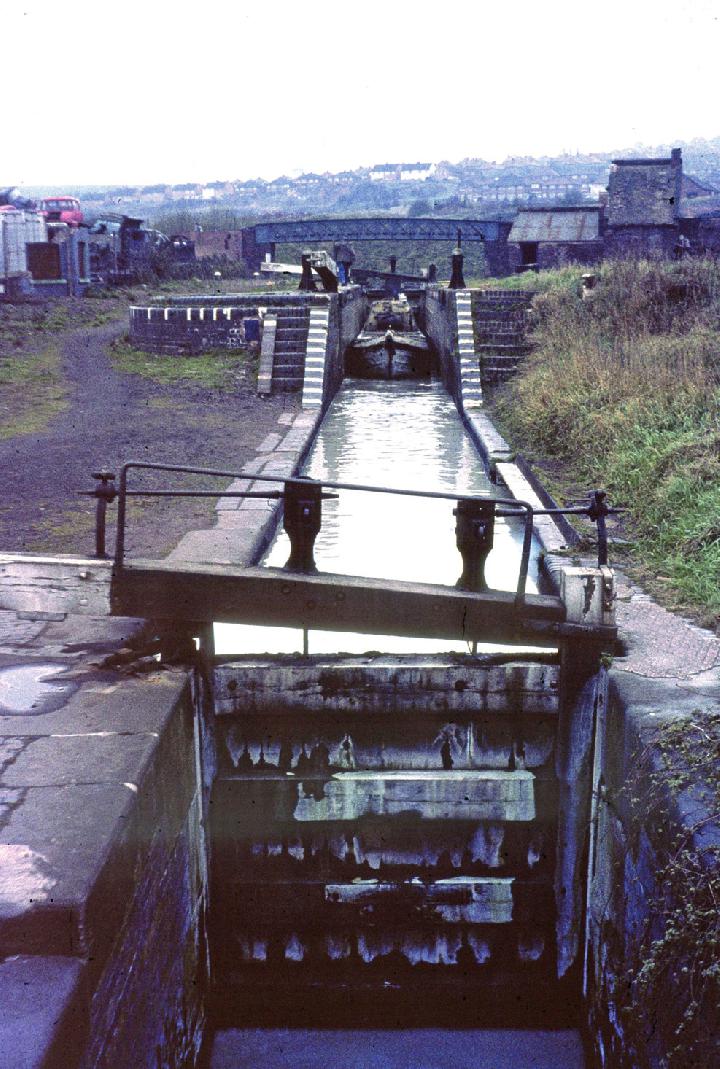 Aldgate in Brades Hall Top Lock on the BCN Gower Branch in May 1967. The white deposit on the lock gate is from the phosphorus waste.

Aldgate towing two Great Western Railway Bantock-built joey boats through Dunkirk Stop, having just come out of the Gower Branch onto the BCN Old Main Line in May 1967. 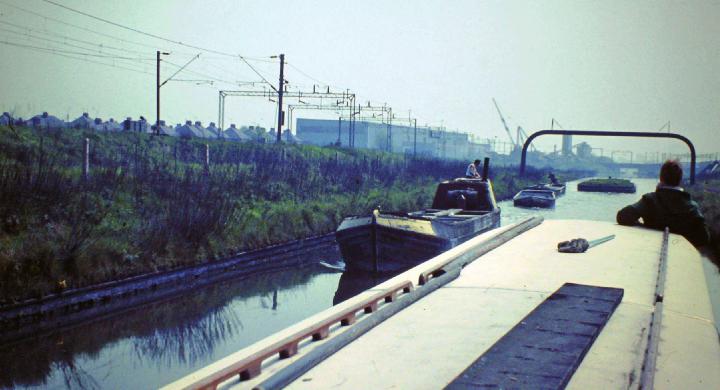 Alfred Matty’s motor boat Stratford with two well-laden day boats in tow carrying phosphorus waste on the BCN New Main Line at Dunkirk Stop having just come out of the Gower Branch on the right. 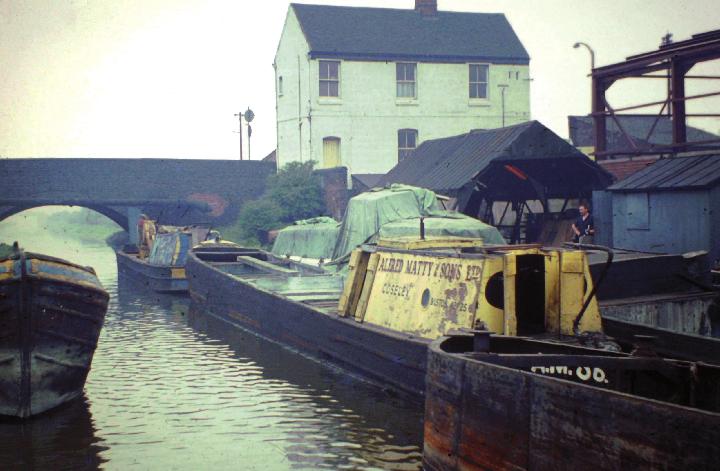 Narrowboats at Alfred Matty’s yard at Coseley on the BCN New Main Line. The boat in Matty’s yellow colours is Aldgate, with the bows of Barnet on the left. In front of Aldgate is Will Newton, ex Darley, which had been shortened to make it into a work boat. The day boat in the right foreground is one of those specially built for the containerised GKN traffic between Witton and Minworth (Spring 2011 NB). 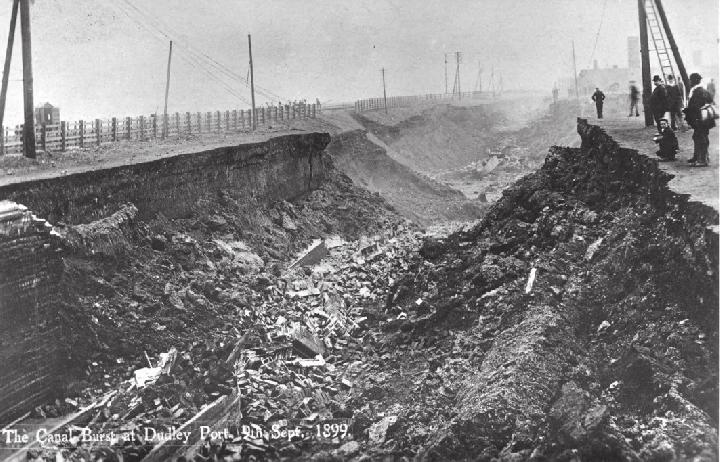 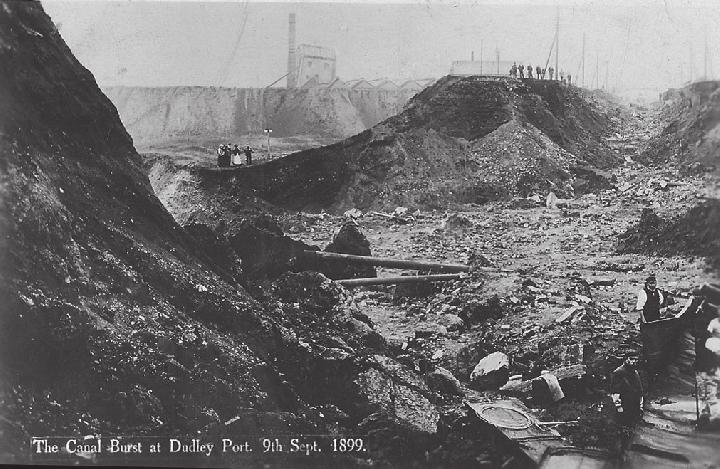 Two of the many postcard views produced of the 1899 breach, which became an instant tourist attraction. The top one is looking towards Birmingham with the railway on the left. The lower one is looking the other way.

The Illustrated London News of 23rd September 1899 reported: “The most serious bursting of canal banks which the Black Country has known occurred at Dudley Port on 9th September. About 4 o’clock it was observed that water was flowing through the bank of the Rattle Chain & Stour Valley brickworks. The alarm was given and the canal inspectors and a number of workmen hastened to the scene; but before anything could be done the breach had widened and a huge volume of water tore away many yards of the embankment, rushing down with a noise like thunder into the pit. Through the gap thus formed, a reach of the canal some six miles long was completely drained and two acres extent of surrounding meadows were deluged. Stranded boats lie all along the bed of the canal and some are said to have been swept into the clay-pit. The damage is estimated between £10,000 and £50,000. The catastrophe is ascribed to the recent heavy rains. There was, fortunately, no loss of life.”

Several people recalled the effects of the phosphorus pollution on Canalworld Discussion Forum; here are some of them:

Some of the information in this article comes from the ‘What Lies Beneath Rattlechain Lagoon?’ website (whatliesbeneathrattlechainlagoon.org.uk) which campaigns for the cleaning up of this still polluted area. Thanks also to Ray Shill for information on the incoming phosphorus traffics and to Chris Clegg and Laurence Hogg for photographs and information.