From the Archives: NarrowBoat, Autumn 2014

The area around Sankey Bridges on the St Helens Canal, from a heavily annotated map based on an original plan from 1873. The site of Sankey Lock is shown, but the Fiddlers Ferry and Widnes extensions are in place. West Yorkshire Archive Service, Wakefield

It has to be conceded that even the keenest enthusiast for waterway history can lose heart when faced with certain records. Today, much can be copied with digital cameras, but in the recent past the researcher had to sit with paper and pencil (pens are never allowed, in case documents get marked), and ponder what, if anything, to record. When files arrive that are several inches thick and contain letter after letter that address matters that seem entirely peripheral to waterways, if essential to their writers, and when one has travelled a long distance and is hot and tired, the temptation is to send the file back and not to bother looking. The C299 British Waterways collection at West Yorkshire Archive Service, Wakefield, shows that this might be a bad idea: insights can be found hidden in innocuous files or those of otherwise tedious content.

Many files at Wakefield concern estates matters – deeds of property, lettings, water sales and miscellaneous agreements. Often detailed and dull, fragments sometimes shed light. A file (C299/48/6/1) about obscure boundary disputes on the Sankey (St Helens) Canal near Sankey Bridges – the extension west from the original Sankey Lock – includes several tattered traced plans from 1896. One of these has the date 2nd May 1764 on the canal line, while a later list refers to 2nd February 1764 for the conveyance of another section. A “plan of Sankey Navigation” (C299/48/6/16) turns out to be a series of plans surveyed in 1759 and drawn in 1763 by John Eyes, who surveyed the extension to Fiddlers Ferry, authorised in 1762. It is unclear when it opened, and as a note elsewhere stated that most deeds had later been lost, these fragments now show that land for the extension was acquired in 1764, but that work had not started in 1763, since Eyes did not show the extension on his plan. Maybe some file elsewhere can provide the exact year when this opened – or perhaps this is long lost?

Even less promising is a file entitled “Erewash Canal and Ilkeston Corporation: Sewage Disposal Works” (C299/10/5/3). The first entry is a notice in May 1930, of Ilkeston Corporation’s plan to lay a new sewer under the canal 330 yards above Hallam Fields Lock. This might seem to be irrelevant to the canal’s history, but the context reveals something about plans for its eventual enlargement once it had been acquired by the Grand Union Canal Company. Maurice T. Woolley, Clerk to the Erewash company (and the Loughborough), referred this to W.H. Curtis, chairman of the Grand Union Canal Co: “In view of possible developments however, I think it right that I should ask your views”. Curtis told Woolley to seek a depth of 7ft 6in in place of 5ft 6in over the new crossing. When the Corporation objected to the increased costs envisaged, Woolley ascertained that the Trent Navigation’s 120-ton standard involved a depth of 6ft. Curtis then agreed to 6ft 6in, and the work was completed in June 1931. What seemed to be merely a dull technical detail sheds light on plans for acquisition, 18 months before it was completed. Had the new crossing been made at only the 5ft 6in depth, this would have had to be removed when the canal was deepened. In the event, this never came about.

Woolley then dealt with a similar sewer case (C299/10/5/4) on the Loughborough Navigation, pointing out in July 1931 that 7ft 6in had been sought “in similar applications elsewhere”; when Loughborough Corporation insisted on a maximum of 6ft, Woolley referred this directly to the Grand Union, and this file is then silent.

A further file (C299/10/5/5) has the exciting title of “Joint Dealings”. This shows that Woolley wrote in February 1931 to the Grand Union, stating that lock gate replacements, proposed for the summer, could be delayed if the canal was to be improved “in the course of the next few years”. The GU engineer suggested repairs to one lock gate, and deeper gates at Gallows Inn Lock, where a sill that had been placed to correct colliery subsidence could be removed. Woolley, who had been a director of the Trent Navigation Co since 1929, remarked that greater depth could bring new traffics in the Trent area, as well as those envisaged on the enlarged line through Foxton to London. This may not have impressed the GU. In April 1931, Curtis proposed to inspect the Leicester, Loughborough and Erewash canals, and to meet Woolley, who suggested he might also visit the Trent. “Mr Curtis wishes this pleasure left over until a future occasion” was the somewhat stiff reply. 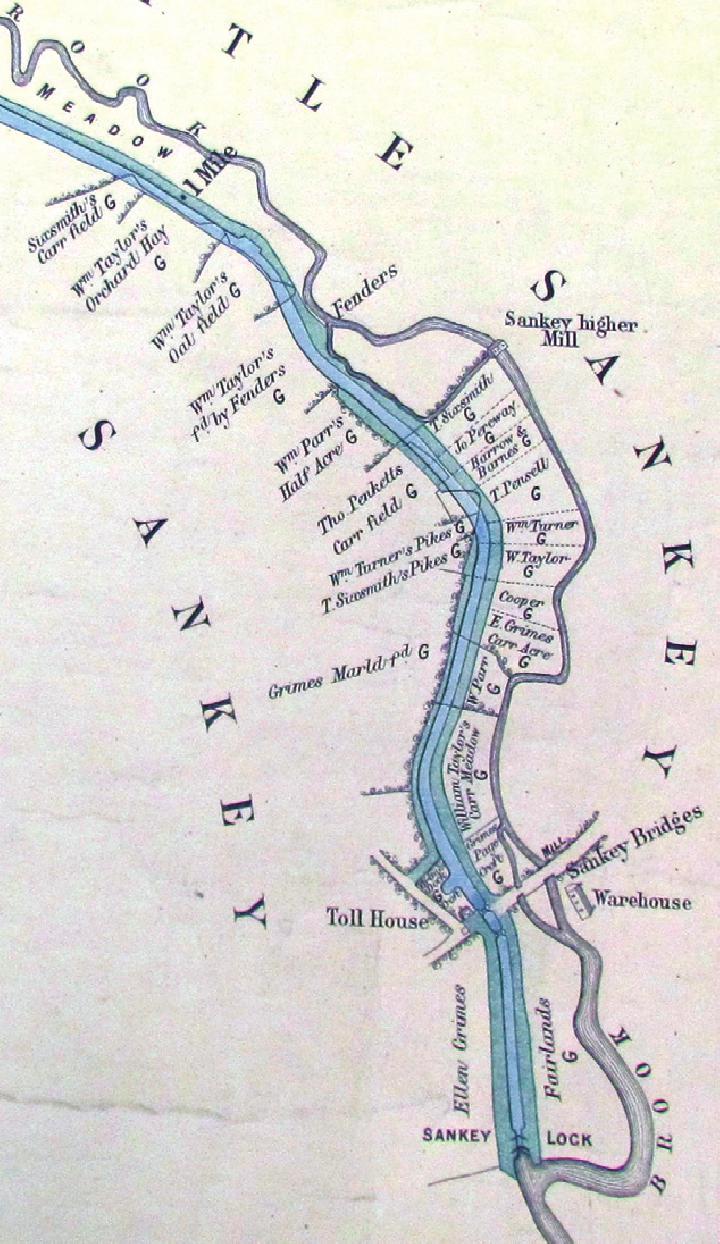 An excerpt from John Eyesâ€™ map of 1763 showing the Sankey Lock and no extension to Fiddlers Ferry. West Yorkshire Archive Service, Wakefield