Canals That Never Were: NarrowBoat, Spring 2014

Despite their northern and fairly isolated locations, the citizens of Lancaster and Kendal were quick to grasp the possibilities of improved transport by canal, particularly for the supply of coal from south Lancashire. The engineer Robert Whitworth was commissioned to make surveys. His first, 1772, route is shown on the contemporary map above, starting from the proposed line of the Leeds & Liverpool Canal near Eccleston (Autumn 2009 NB), crossing the tidal Ribble by an aqueduct below Preston, and running by Kirkham, Garstang, and Lancaster to Tewitfield where it rose 86ft to a summit level extending to Kendal in Westmorland. It was essentially a contour canal in the Brindley style, and if built would have created a level pound from Liverpool into north Lancashire – imagine 86 miles of unobstructed cruising! However, it also involved a lengthy and difficult aqueduct crossing the tidal Lune estuary at Lancaster, to circumvent which Whitworth produced a revised plan locking u… 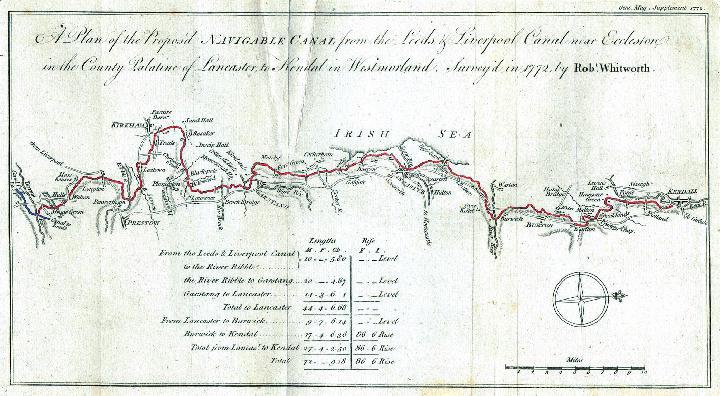