Canals That Never Were: NarrowBoat, Autumn 2013

The rich agricultural districts of East Anglia are relatively close to London, but there has never been a direct waterway connection to take produce to the city markets, despite the huge increase in population. The opening of the Stort Navigation in 1769 left a gap of only 28 miles between Bishop’s Stortford and the River Cam at Cambridge. Robert Whitworth was instructed by the City of London in 1779 to survey a canal link, but his report the following year attracted fatal opposition from Lord Howard de Walden, who objected to the route across his estate in front of Audley End House at Saffron Walden.

The project was revived a decade later; this time John Rennie set out a canal which avoided Audley End by means of two tunnels, and bypassed Cambridge by an extended line passing near Newmarket to the Little Ouse at Lakenheath. Despite the changes, this was also killed by opposers, and the scheme was not then seriously reconsidered until 1810.

In that year Ralph Walker prepared plans covering much of the earlier route, but reverting to a junction with the Cam at Cambridge, whilst Francis & Netlam Giles refined Rennie’s line for another group, bringing it to a junction with the Cam at Clayhithe, and adding a branch from Great Shelford to the Ivel Navigation at Shefford. Put before Parliament in 1811, the Bill was lost in committee.

The promoters returned in the 1812 Session. With the Shefford Branch now cut back to the turnpike road at Whaddon, and with protective provisions for several parties, they finally obtained their Act. But the necessary finance was not forthcoming, and despite a further Act in 1814 allowing the northern part to be built with the limited moneys already subscribed, the proposal finally died without a spade being turned.

In its final form as shown on the opposite page, the London & Cambridge Junction Canal was to run for 32 miles between Bishop’s Stortford and the River Cam at Clayhithe Sluice, via Stansted, Elsenham, Newport, Saffron Walden, Great Chesterford, Duxford, Great Shelford, and Fen Ditton. The level Whaddon Branch would be nearly 9 miles long. The main line rose by 12 broad locks to a tunnel 2,100 yards long at Elsenham, on a summit level rather less than 5 miles long fed by four new reservoirs. It then gradually fell through forty locks to the Cam. Tunnels of 418 and 704 yards at Saffron Walden, with associated cuttings, kept the canal outside of Audley End Park, and a further reservoir north of the town helped to augment the water supply. Rennie’s estimate was £543,838 for the main line, and £44,848 for the Whaddon Branch. A width of 44ft and depth of 5ft was intended, slightly more on the summit length.

Whether the canal would have succeeded and survived is open to question, but if it were here today it would certainly be a well-used waterway.

With thanks to Richard Thomas for help received. His website www.leeandstort.co.uk is a most valuable source of information. 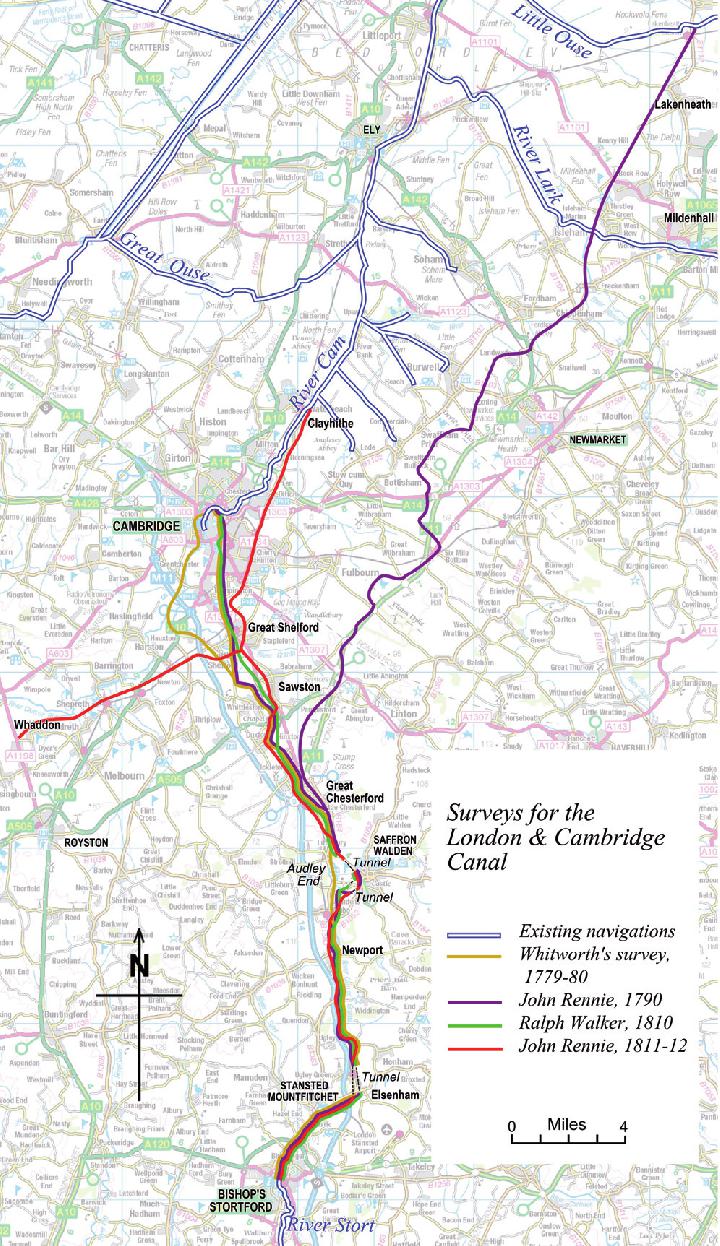 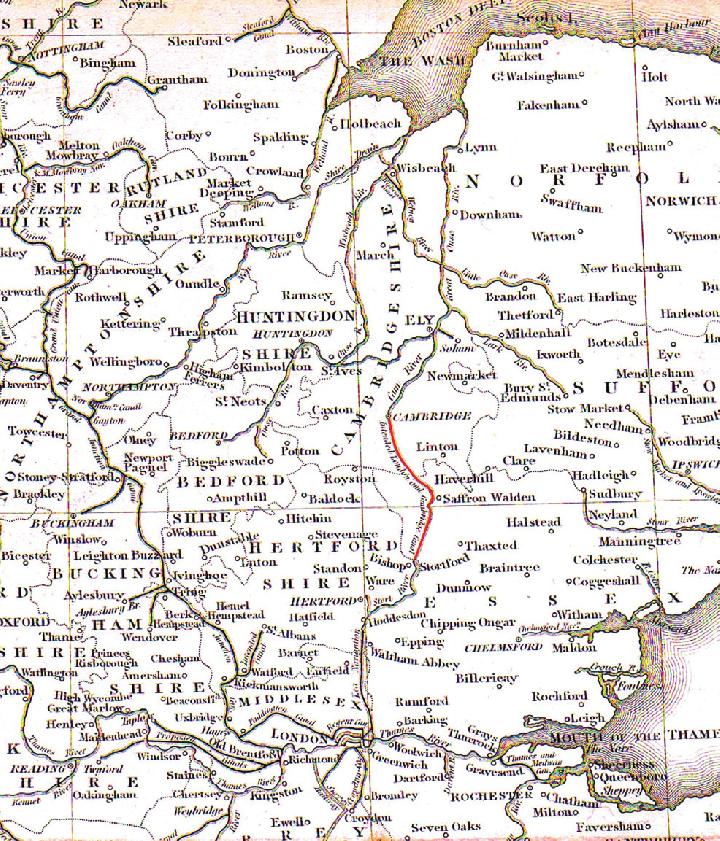 Part of William Swire’s map c.1824 showing how the L&CJ Canal would have connected the Fenland navigations with London. 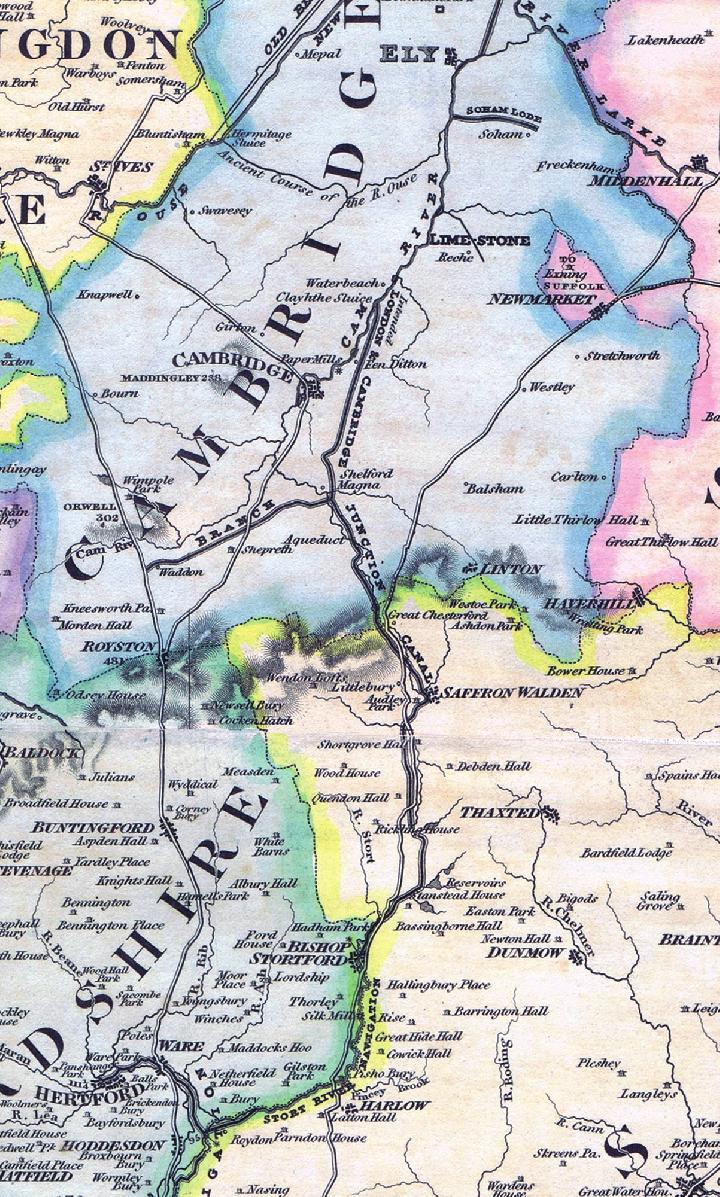 The proposed canal was still appearing on maps published in 1830 and later.