Art of the Waterways: NarrowBoat, Spring 2013

This is how the cabinside of Harry King’s Nautilus may have looked, with some of the details also based on Harry’s other boat Forget Me Not. The style of lettering and flowers appears almost identical to that painted on John Franks’ boats Benjamin and Valiant, both latter craft appearing in NB’s Summer 2008 edition. The castles are slightly different to those on Harry’s boats but it might well be the case that two or more painters worked on the same boat when docked; such differences did appear, depending on who did what when the decorative work was applied. The colours and some details are an interpretation, but the similarity between these two cabin sides is apparent. John Franks’ boats were even more lavish with scrolling in the corners of the main panel, whose borders almost simulate a painted picture frame.

The opportunity to study the original photograph of Harry King’s boats Nautilus and Forget Me Not, that appeared in Chris R. Jones’s article ‘Kings of the Cut’ in Autumn 2008 NarrowBoat, has given me a chance to recreate some of the finer painting details of these craft.

Decorative painting on narrowboats, generally referred to as ‘roses and castles’, usually means the distinctive naive brushstroke painting style practised by famous narrowboat painters of the 20th century such as Frank Jones, Frank Nurser and a multitude of others. The only exception is William Hodgson of Stoke-on-Trent, who painted in his own quick but more realistic style, dubbed ‘knobsticks’.

However, before World War One there were other boat painters who made an attempt to render a more realistic effect, which was most likely the normal way of painting when this display of flowers and romantic landscapes on narrowboats was an expression of the accepted taste of the general population. This was used on all manner of domestic items, from ceramics to printed ephemera, and was seen in the homes of many Victorians and Edwardians.

Although early 20th-century photographs of decorated boats exist, few are clear enough to see the small individual painted details well enough to recreate them. But two photographs of Harry King’s boats and two others, taken about the same time, of John Franks’ boats (Summer 2008 NB) give a detailed view of boat painting for those independent boatmen contractors working over the southern Grand Junction Canal during the Edwardian period, who docked their craft at boatyards such as that of William Edmund Costin Ltd of Castle Dock, Berkhamsted.

The boat’s name and flowers were painted on the tiller of each boat. The badly spaced letters of Nautilus are as painted on her tiller. 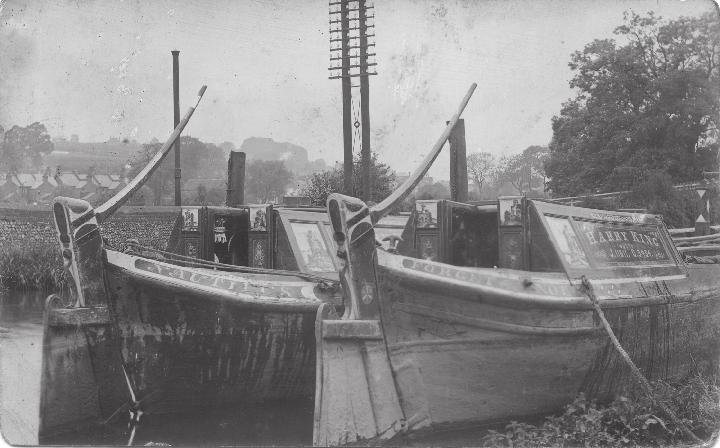 Harry King’s Nautilus and Forget Me Not at Apsley End. The painted details are slightly blurred on the nearest boat but Nautilus’s are clearer, and it was a study of these that enabled the coloured reconstructions to be made. It is likely that the decoration seen here was applied by Costin’s, and is a good indicator of their dock style.

The painters who worked at southern GJC docks seem to have had a very similar style, which is especially noticeable in their landscapes, and they may well have worked at a number of yards, spreading the same visual aesthetics over a wide area. Harry King’s own records show his boats Nautilus and Forget Me Not were docked at Costin’s until it closed in 1910. The photograph of his boats reproduced here is undated, but photographs of other boats around at the time, that were also registered at places like Berkhamsted, Tring and Uxbridge, show a similar painting style, so it is likely that those craft were painted in the area they were registered.

This Edwardian painting style shows a greater degree of complexity than that used by many post World War Two painters, with finer details which are only visible when viewed relatively close to the boats, which, for the boaters who owned them, was most of the day when living and working aboard. Greater complexity indicates more time to apply it, but this might be misleading, as the flowers in particular show a speedy approach as is apparent in the blending in the flowers and leaves as paint is being worked wet on wet. The landscapes show a good deal of wet-on-wet painting too. 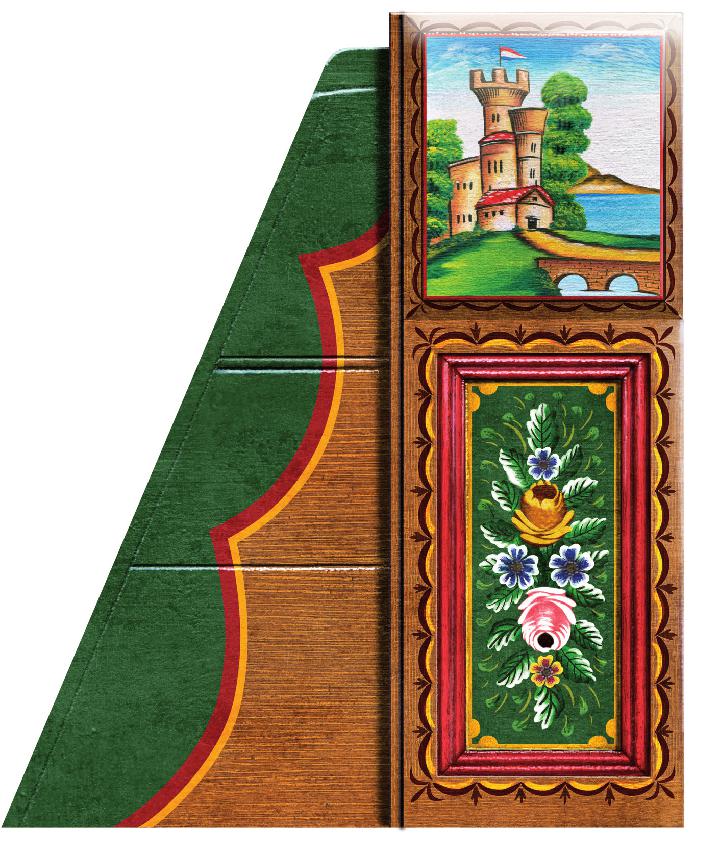 Part of the left-hand rear cabin bulkhead and door of Harry King’s Nautilus about 1915. Careful study of the photograph of his boats reveals some of the decorative details. Obviously a certain amount of interpretation of detail and colours was necessary to create this, but it gives an idea of what they may have looked like. The graining looks particularly dark, perhaps dark oak as opposed to the light oak preferred by firms such as Samuel Barlow Coal Co and its successors, Blue Line Canal Carriers. Ovaltine boats could be dark in the post war years and S.E. Barlow boats could be both dark and quite orange in colour. Another detail of note is the leaves painted to appear as if light is falling on them mainly on their left side. This is a feature used by other painters who worked in the southern GJC area such as William Allen and, later, Alf Fenemore; the former may have been taught by the man or men that painted both the Franks and King boats. 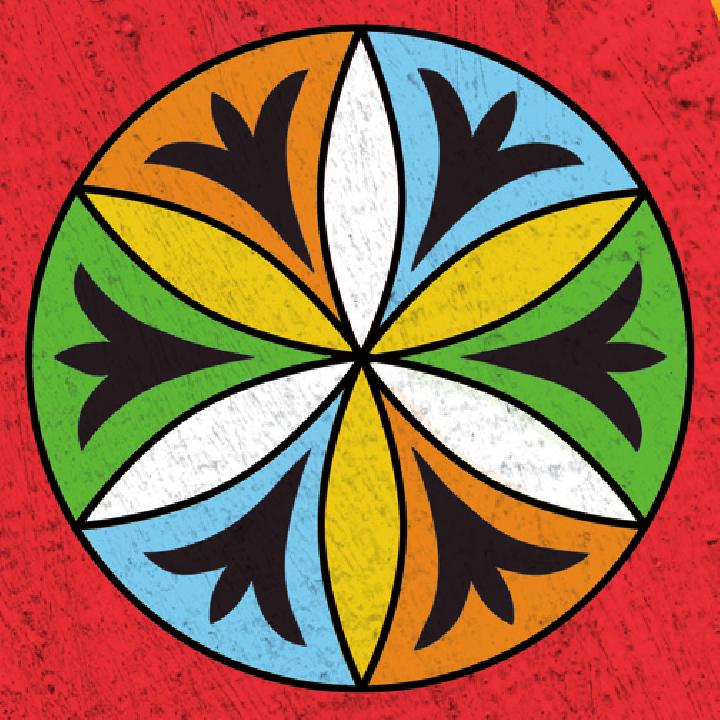 This unusual compass wheel design was painted on the rudder stock of Harry King’s Forget Me Not. 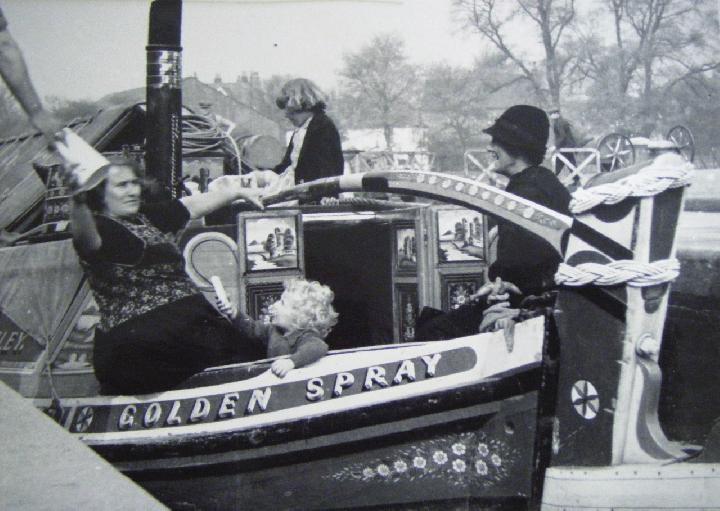 Similar painted details are apparent on T.W. Toovey’s wide boat Golden Spray at Brentford in the 1930s, most likely painted at Bushell Brothers at Tring. Her cabin doors have all the painted scalloped borders around both castle and flower panels, with the castles showing those distinctive tall towers surrounded by equally tall trees, and the flowers surrounded by highlighted leaves. On the cabinside castle panel, a flat-topped double-arch bridge can be seen, which is another distinctive feature seen on Costin’s and later Bushell’s painting. Could the boat painters at Costin’s have moved to Tring when the Berkhamsted yard closed down in 1910, and continued their distinctive style for a new employer?

Harry’s boats show the more usual tall castle towers indicative of the south, with either heavy battlement tops or onion-shaped domes surrounded by towering trees, and sometimes with an adjacent single-arch bridge or a multispan flat-topped bridge. The legacy of this painting style extended way beyond World War One, and appears in the work of those who succeeded them, in particular William Allen of Leighton Buzzard, and Alf Fenemore of Bushell Brothers at Tring.

The colour illustrations in this article show some of the decorative details on narrowboats which would have been commonplace on owner-steered craft seen at work on the south Midland waterways up until World War Two, and perhaps give us a glimpse as to how similar boats would have been decorated in the 19th century. If only detailed photographs of those craft had survived!

The illustrations were created as part of my ongoing study of boat decoration, which I consider to be vital, as decorative flowers and landscapes are applied less and less to purpose-built leisure craft nowadays. A full measure of decoration is rare, even on ex-working craft; those that survive have their origins in large fleets like Fellows, Morton & Clayton, and the Grand Union Canal Carrying Co, which had little or no decoration originally.

Only a few restored boats today carry anything like the amount of decoration seen before 1960, and the all-over decorative style preferred by owner-boatmen like Harry King has all but disappeared, to survive only in old photographs and on several museum exhibits such as Joe Skinner’s Friendship at Ellesmere Port. 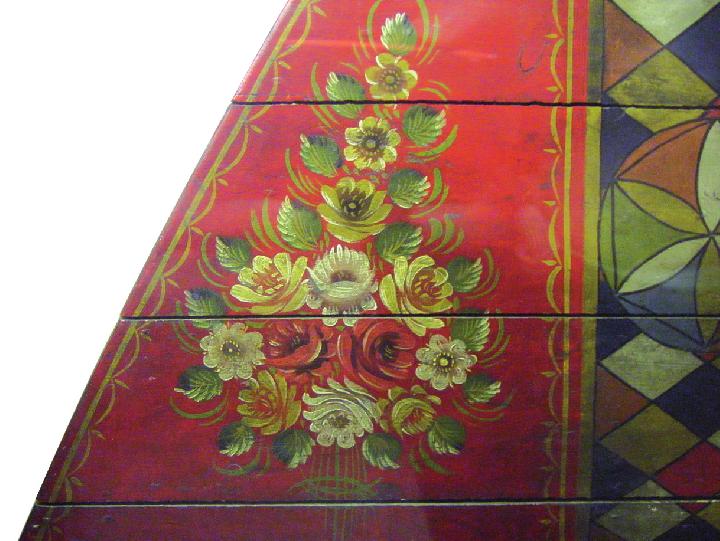 This bunch of flowers on a deckboard at Stoke Bruerne museum painted by William Allen shows some of the features on the King and Franks boats, in particular the highlights on the left-hand side of the leaves and a variation in the different flowers. As William Allen worked at Costin’s, it is reasonable to assume that he picked up some of its decorative style.