Canals That Never Were: NarrowBoat, Spring 2013 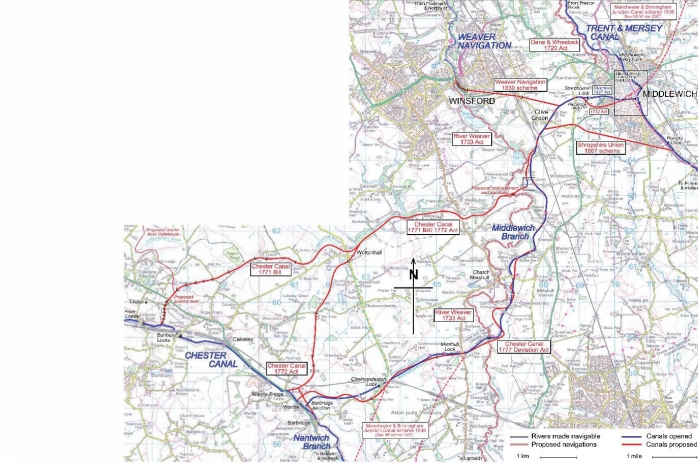 The same 1720 session of Parliament that authorised making the River Weaver navigable to Winsford also passed a separate Act giving powers to make a branching navigation along the River Dane and a short length of the River Wheelock between the salt towns of Northwich and Middlewich. This was not done, although a short length of the Dane became useable in Northwich, and part of the river bed a little below the Big Lock at Middlewich was later taken for the Trent & Mersey Canal, with the river flow diverted.

A separate group was authorised to extend the Weaver to Nantwich in 1733, but this project was also stillborn, although the undertakers were sufficiently active forty years later to claim £60 compensation from the Chester Canal promoters. As late as 1945 fresh powers between Winsford and Nantwich were granted to the Weaver Trustees in anticipation of a Weaver–Wolverhampton Canal.

The Trent & Mersey Canal obtained its Act in 1766 and, faced with the prospect of the trade of their port being drawn off to the Mersey and Liverpool by the newcomer, the citizens of Chester were quick to seek either a canal of their own to the south, or a connection with the new waterway. A canal to Runcorn was considered, but they settled on a more direct inland line to Middlewich, although an uncooperative T&M would not allow a junction with its proposed canal.

The route was from Chester to near Tilstone as later built, from where it climbed rapidly to a short summit supplied by a feeder from Cotebrook, then fell to Wettenhall and followed the level to Middlewich, crossing the River Weaver by an aqueduct. A Bill for this in 1771 having failed in the Lords, a partial diversion was surveyed through Calveley and Wardle which, although longer, avoided the worst of the high ground, and also facilitated a level branch to the market town of Nantwich, partly with an eye to southwards trade independent of the Trent & Mersey. In this form an Act was obtained the following year, and the Chester/Wardle/Nantwich line opened in 1779 with the first half mile of the Nantwich Branch moved a little west of the authorised route, to Wardle Bridge.

Lack of funds and the continued absence of agreement to a junction at Middlewich delayed the rest of the canal, but a start had been made in 1774 on the Weaver crossing, which included a high embankment. This was no doubt to be made from the contents of a lengthy cutting, about 15ft deep, east of Clive Green, and some 300 yards was dug of the intervening length of canal, with at least two spoil boats provided at the site. The remains of this cut survived to be marked on later maps.

However, a fresh survey found that a further diversion of the Middlewich route between Wardle and Clive Green would provide an easier crossing of the Weaver valley south of Church Minshull, with a lock introduced at Stanthorne to reduce the cutting depth. An amending Act for this was obtained in 1777, the same year the Trent & Mersey opened throughout, but it was hopeless to proceed whilst the T&M continued to refuse it coming nearer than 100 yards to its canal.

Fifty years later, trade routes were set to alter with the building of the Birmingham & Liverpool Junction and Macclesfield canals. The B&LJ ran from Autherley to Nantwich, giving the connection to the midlands which the Chester Canal Co, united with the Ellesmere since 1813, had always craved. The time was right to blow the dust off the old plan of the Middlewich Branch. 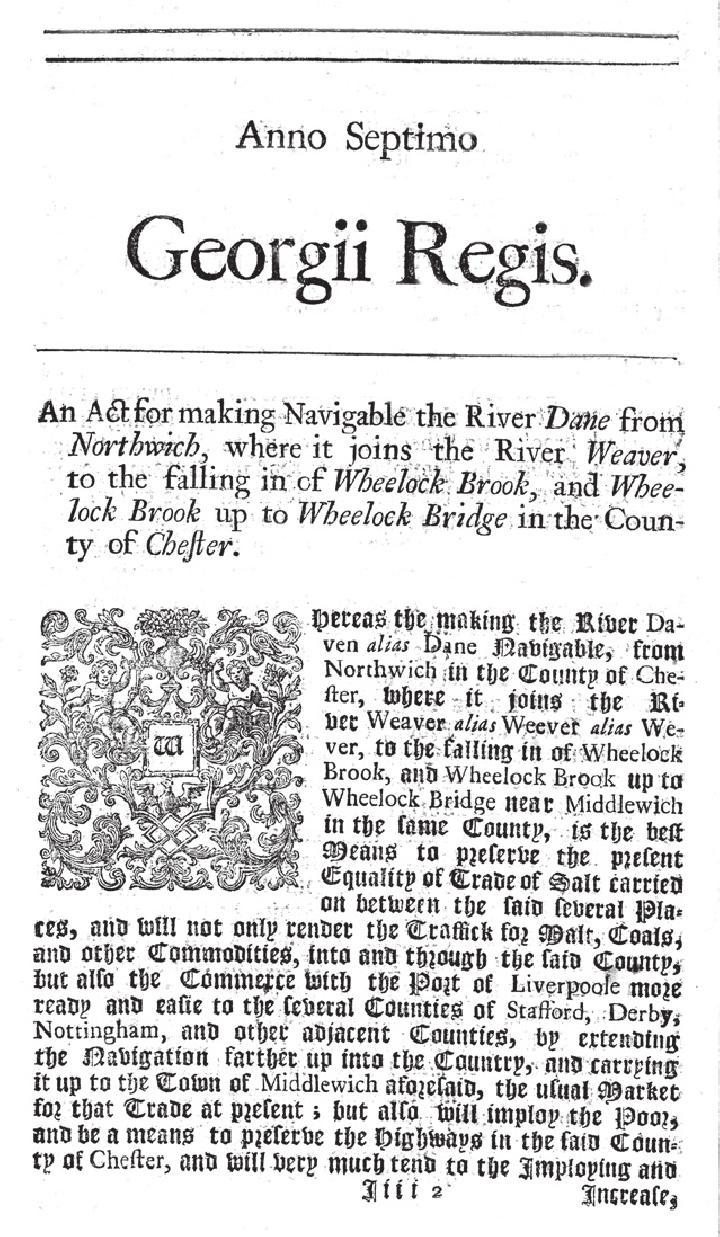 The abortive Act of 1720 for making the rivers Dane & Wheelock navigable to Middlewich. 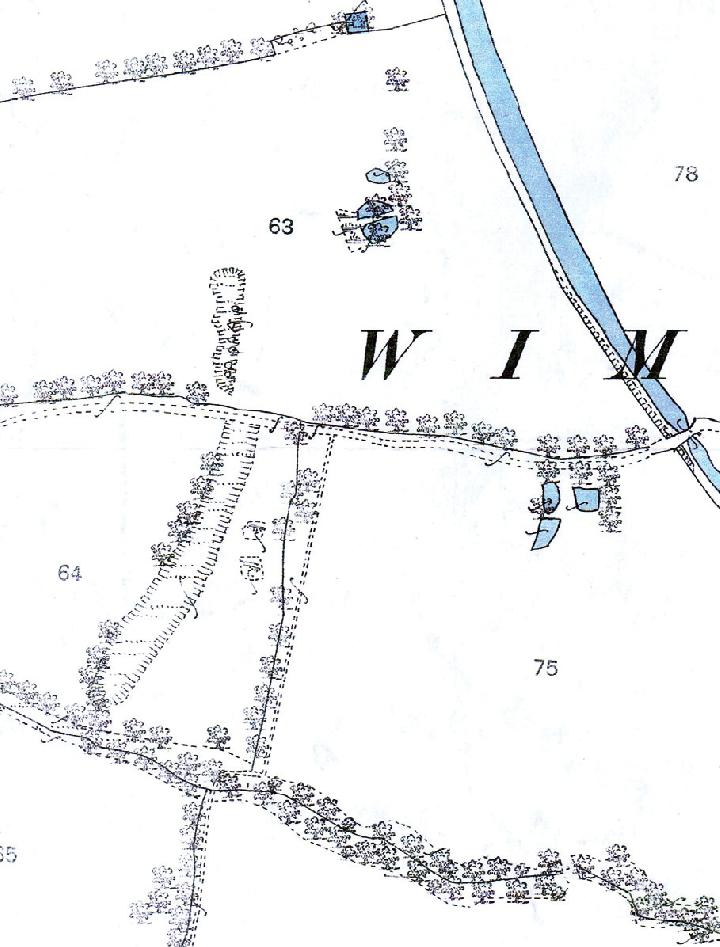 An extract from the Ordnance Survey plan of 1872 in the Weaver valley showing traces of the cut started by the Chester Canal in 1774 before the decision was taken to alter the canal route. When the Middlewich Branch was finally made it was at a higher level.

A short northward deviation near Middlewich was included in its 1827 Act, but otherwise construction went ahead with the benefit of the 1777 powers, which were wide enough to allow minor adjustments from the earlier route to reflect more modern construction techniques, and a junction at Barbridge a little south of the previous plan.

The canal opened throughout in 1833, after the T&M insisted on itself providing the 100-yard missing link in Middlewich, known as its Wardle Lock Branch, so that it could exercise some control over the new waterway.

The Weaver Trustees, their territory imminently surrounded by canals, considered a junction between Winsford and the new Middlewich Branch in 1830, but a convenient connection between the river and the midlands had to await the building of the Anderton Lift 45 years later.

The T&M was entitled to high compensation tolls from traffic usingWardle Lock, and the Manchester & Birmingham Junction Canal, promoted in 1838, included a short southerly branch bypassing this lock. This project did not proceed (see Winter 2007 NB), but the Shropshire Union company, having absorbed the Ellesmere & Chester, continued to press for toll reductions and made preliminary tactical moves towards a similar bypass in 1851, and again (on a longer route to the south) in 1867.

The T&M company gradually replaced all its staircase locks in the 1830s, and a diversion eastwards inMiddlewich substituted three single locks for the original two-rise. When its successors, the North Staffordshire Railway, obtained powers in 1891 to modernise the northern part of the canal, this included a new cut and single large lock close to the earlier alignment, but it was not pursued. Neither was the Royal Commission’s more radical 1908 proposal for a canal improved to 100-ton barge standard with an inclined plane in the town, which would also have involved a short diversion of the Shropshire Union Canal with a new transhipment basin.

A drawing prepared for the Royal Commission on Canals & Waterways in 1908 showing the Foxton-type inclined plane envisaged for 100-ton craft. At Middlewich the rise would have been 45ft 6in, replacing five existing locks. 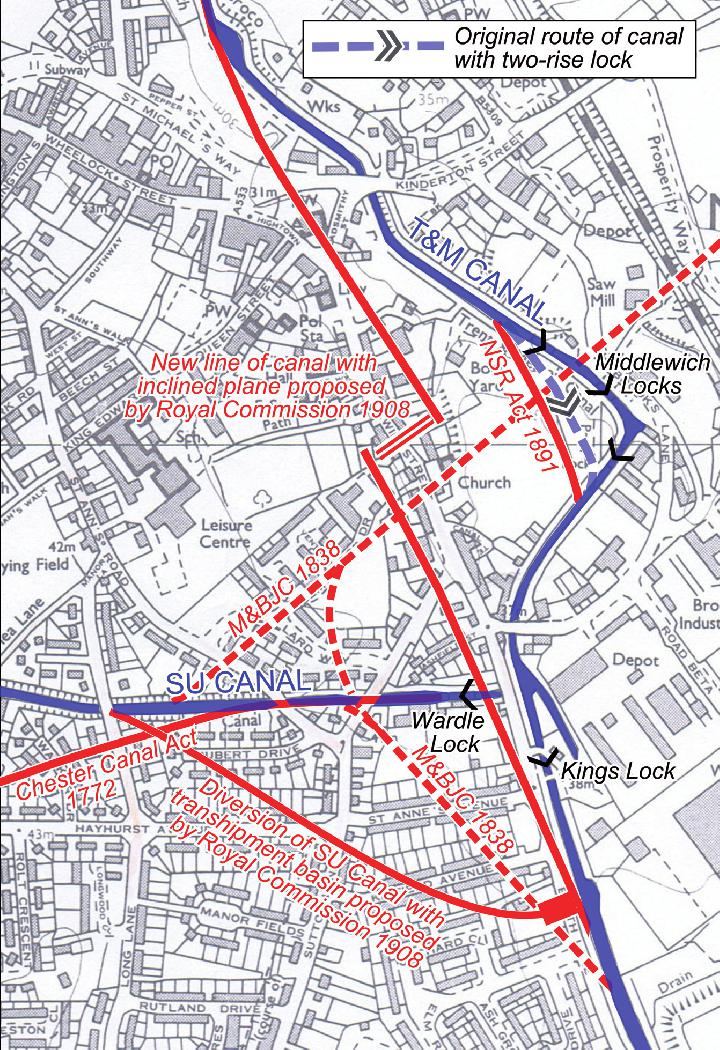 An enlargement of Middlewich area. The Manchester & Birmingham Junction Canal scheme, shown by a broken red line, was covered in more detail in Winter 2007 NB.