Canals That Never Were: NarrowBoat, Spring 2012

Richard Dean details an early proposal to extend the Thames & Severn Canal to Abingdon and thus by-pass the notorious upper reaches of the River Thames, and reduce the distance from Lechlade to Abingdon by half

After obtaining their Act in 1783, it soon became clear to the Thames & Severn Canal’s promoters that the weak link in their project was the poor state of the Thames, with which it was to connect at Inglesham, above Lechlade. Fearing that little would be done by the Thames Commissioners to provide a fully serviceable navigation, some T&S interests set up an independent concern to extend the canal across northern Berkshire to join the Thames much further down at Abingdon. The promoters engaged Robert Whitworth to survey the route, and his line extended the proposed Kempsford level of the T&S by an aqueduct across the Thames, then roughly parallel to the river as far as Fyfield, where the remaining length to Abingdon fell 80ft through nine locks. It was a relatively straightforward scheme with no major works, and included a short branch to the river at Harts Ferry with four locks, for the benefit of Oxford. Only 24 miles long, the saving in distance for through traffic… 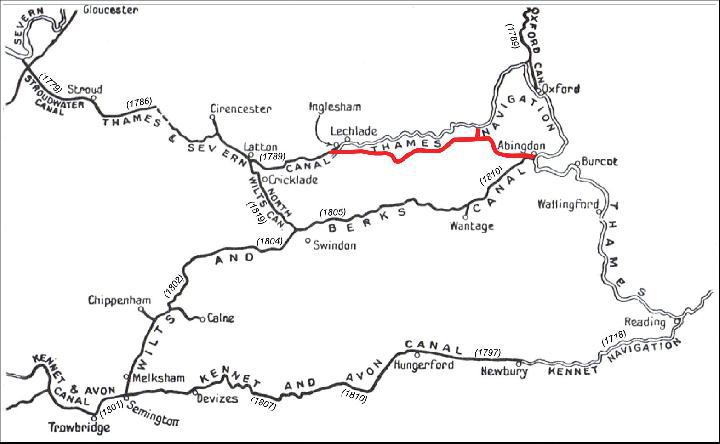