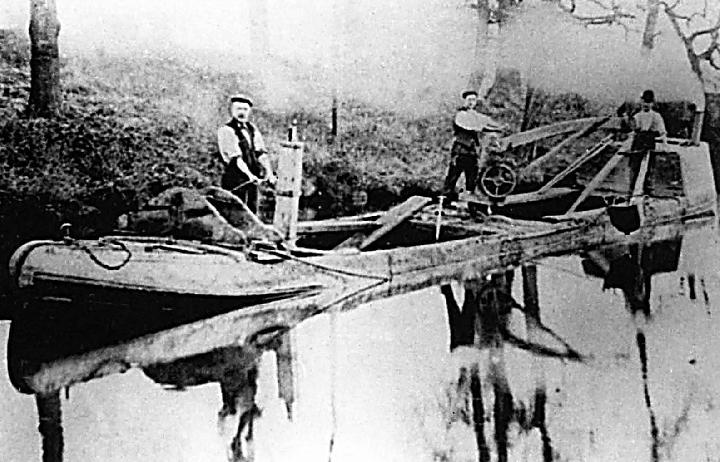 A rare photograph of a spoon dredgerman handling the forward winch. He is taking up the strain on the winch chain which is connected to the leading edge of the spoon, ready to start winching the spoon into the material to be dredged. This design of forward winch was used on the Trent & Mersey Canal. When the spoon is full it will be raised by the boat’s crane with a man at the end of the long pole attached to the spoon keeping it at the right angle so as not to spill the dredgings back into the water. Edward Paget-Tomlinson

Once built and opened to traffic, a canal eventually suffers from silting. Much of this finds its way into the waterway from feeders and storm drains. In 1959, a heavy thunderstorm brought so much mud down a feeder to the west of Shortwood Tunnel on the Worcester & Birmingham Canal that a bar was formed across the cut which stopped traffic until it had been dredged. The Stone Cross area of the Tame Valley Canal suffered persistent silting from sand washed down from the sides of the cutting. The Oxford Canal was affected by silting entering it from the Cherwell crossing at Cropredy and from mud brought down the Souldern Brook.

Several methods were used to deal with silting, one being the draining of the affected length, the mud being shovelled into barrows and wheeled up planks onto the bank. For many years this was the only method available, and it was still occasionally resorted to in the early 1950s.

For large dredging projects, steam grab dredgers were used once the technology became available. Moving these cumbersome machines to a dredging site was time consuming, and for ‘spot’ dredging the spoon dredger was used. Canal companies didn’t like grabs anywhere near masonry and so spoon dredgers were always used for cleaning out wharves, basins and other places where material, often coal spilt while unloading, had accumulated against a wall.

There were some places where no type of dredger could be used, for example the short and narrow Curdworth Tunnel (known as Paddy’s Tunnel) on the Birmingham & Fazeley Canal. In this case a hole was dredged at each end of the tunnel and the passage of loaded boats would then clear the tunnel as they pushed the mud in front of them.

The spoon dredger, therefore, was not a substitute for a steam dredger but the two were complementary. In construction it was an ordinary canal boat with a wooden crane mounted on a platform over the hold. The chain ofthe crane was attached to a spoon, made of perforated iron so that water could drain from the wet mud. The spoon was fastened to a long, heavy pole with a T-shaped handle at the end. It was dropped into the water and then dragged forcibly into the mud by a winch forward of the spoon. The crane would then be used to raise the spoon just above gunwale level, guided by one of the crew at the endof the pole. When it was positioned over the hold this man would use the T-bar to turn the spoon over so that its two hundredweight of dredgings dropped into the hold. The use of an iron spoon was preceded by the use of a leather or canvas bag, its mouth extended by an iron ring.

Whilst all spoon dredgers carried the same equipment, the layout varied. On the Trent & Mersey Canal the crane was placed amidships and the winch was fixed on the fore deck. Other operators might position the crane further aft and use a portable winch that could be secured in the position needed. The spoil was loaded into the hold of the spoon dredger rather than into separate mud boats. 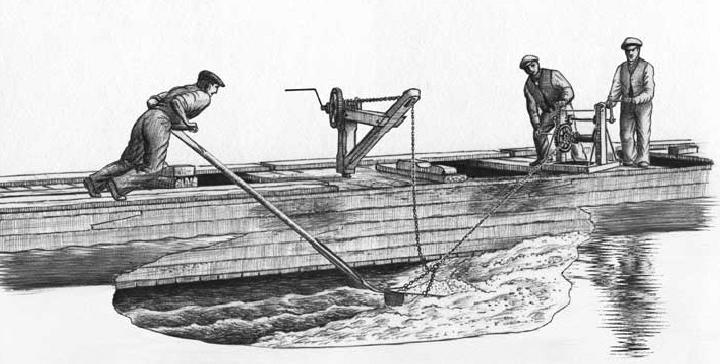 A cutaway drawing of a spoon dredger at work on the BCN. The spoon is being pulled into the mud by two men on the forward winch while a third man controls the angle and direction of the spoon. When it is almost full the men will then pull it out of the mud and up above gunwale level using the crane and the water will drain through holes in the spoon. When it is high enough the third man will tip the spoon upside down to empty it. Christopher Jones 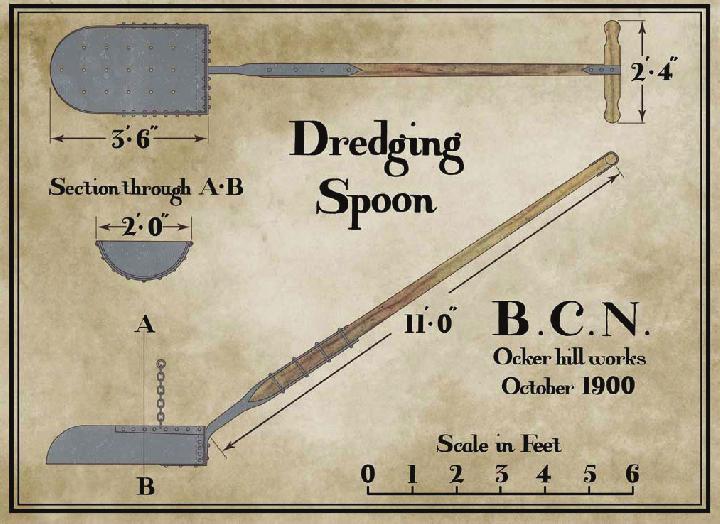 An early 20th century scene of a spoon dredger at Salford Bridge. Development of this area of Birmingham had just started, hence the piles of bricks on the wharf in the background. The efforts of two men were required to free the spoon, with its 2 cwt load, from the mud and to raise it just above gunwale level. During this part of the dredging operation the man on the pole had to keep the spoon at the correct angle to avoid losing the load. On many boats the forward winch was on the fore-deck but, on this boat, the winch is portable and is seen fixed on the side of the boat on which the spoon is working. The chain attaching it to the spoon lies slack. Although not visible, the boat is prevented from moving by a rope attached to a stake driven into the towpath to the right. The stern would be held in position by a heavy pole. The crane is not a fixture and has been placed towards the rear of the hold. It would have been possible to remove it and place it at the same distance from the front of the hold when required. Bob May/H.R. Hodgkinson Collection/Birmingham Central Library

Spoon dredgers could be owned by canal companies or by private contractors. Among the latter were the Merchant family of Kidderminster who maintained the River Stour between its junction with the Staffordshire & Worcestershire Canal and Wilden Iron Works, (see Waterways World October 2005). Pagett’s of Perry Bar did some spoon dredging on the BCN and also on the Birmingham & Warwick Junction Canal. In 1955 they were employed to clean out scours that had formed below several of the Minworth and Curdworth locks.

Spoon dredgers required a crew of three men, two on the winch handlesand one to manipulate the spoon, who were often self employed as far as the provision of labour went. This meant that they were not always available when required. In June 1943 the dredger men on the Stourbridge Canal went on strike. The canal company owned the spoon dredger and the men were paid on piece work at the rate of 5s 6d per ton. In November of that year dredging was again interrupted by an accident to one of the men, and in September 1944 it was reported that the dredgermen were “in the hopfields”.

Dredgings had to be disposed of. Sometimes they could be shovelled out onto the bank at the site, as was done at the above-mentioned work at Curdworth locks; otherwise they had to be taken to a tip. The piece work nature of the job led to some fiddles. On one occasion a spoon dredger bound for a tip below Ryder’s Green Locks on the Birmingham CanalNavigations was gauged at the top lock, the men’s payment being dependent on the gauged weight. During the night the loaded boat was worked back up the locks. Next morning the same boat was presented for gauging again, which meant that the dredgermen were paid twice for the same load.

Spoon dredging was one of the more picturesque sights of canal life. It was not until the late 1950s that British Waterways acquired some small hydraulic grab dredgers. The grab on these could be precisely controlled and, as they could be used near masonry, the old spoons were superseded.

Whilst canal spoon dredgers were all manually operated, on some rivers steam power was applied to the winches. It was estimated that 65 cubic yards of gravel could be raised by one of these machines in a 12-hour day.