Canals That Never Were: NarrowBoat, Autumn 2009

Although conceived nominally as part of a sea-to-sea route, it was the local traffic to and from the ports which justified building the Leeds & Liverpool Canal (Winter 2006 NB).

The engineer John Longbotham laid out a route that was as direct as the country permitted; west of the summit at Foulridge his line closely followed the rivers Calder and Ribble, descending nearly to Preston, then through Leyland, Parbold, Burscough and Maghull to Liverpool.

In this form the whole scheme was approved by Parliament in 1770. Near Eccleston it was to be joined by an early project for a separate canal to Lancaster and beyond, which later developed on a different route as the Lancaster Canal.

The Yorkshire portion and the easy Parbold to Liverpool length were soon built largely according to this plan, together with a branch up the Douglas Valley to serve the Wigan collieries.

Longbotham had planned a short summit at Foulridge passing through a basin or reservoir at the 521ft level, with most of the lockage on the whole canal grouped in three-chambered staircase locks. This was partly implemented on the Yorkshire side, but as construction moved westwards Robert Whitworth modified the plans, lowering the summit 53ft by tunnelling, and introducing single locks to save water. 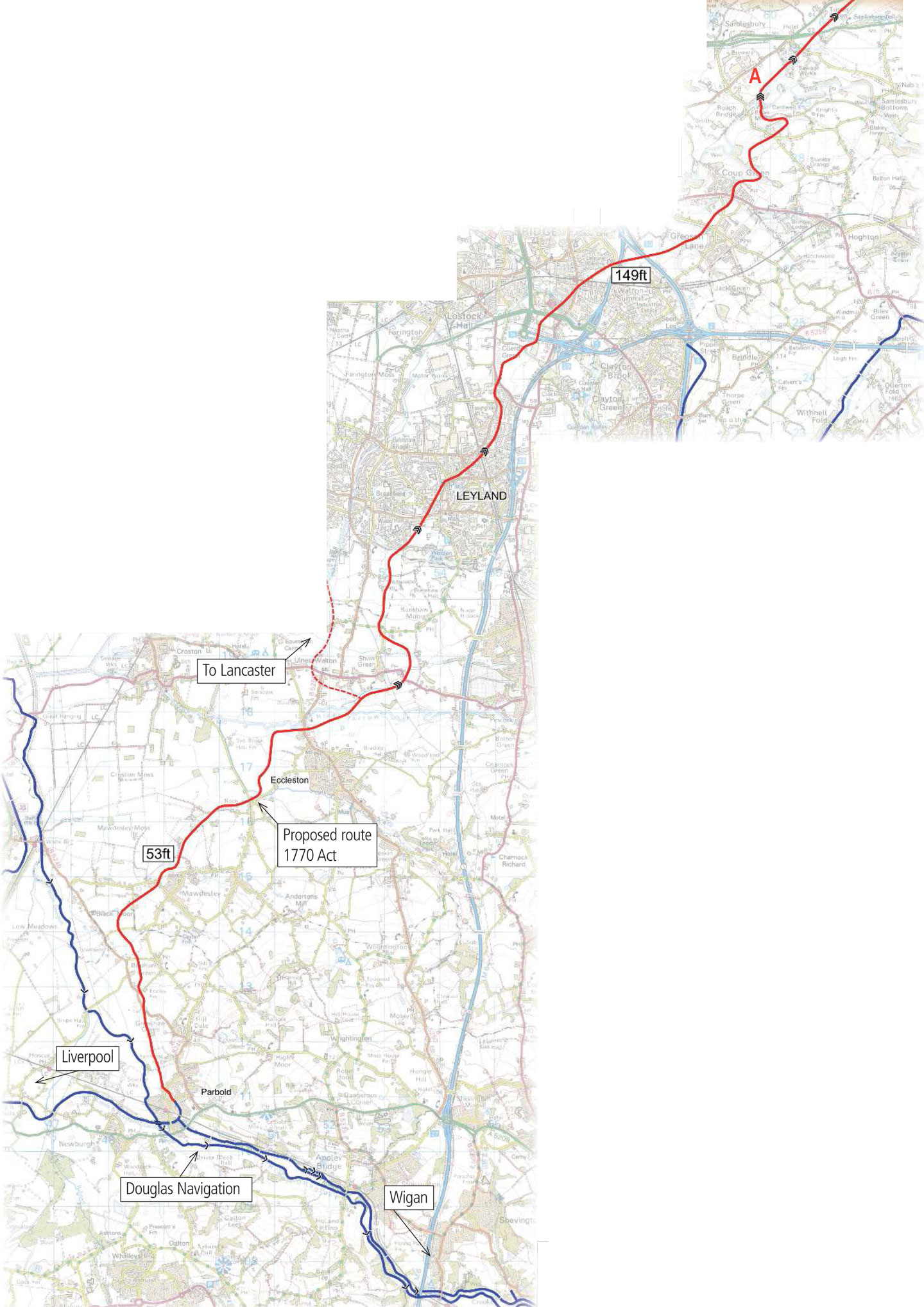 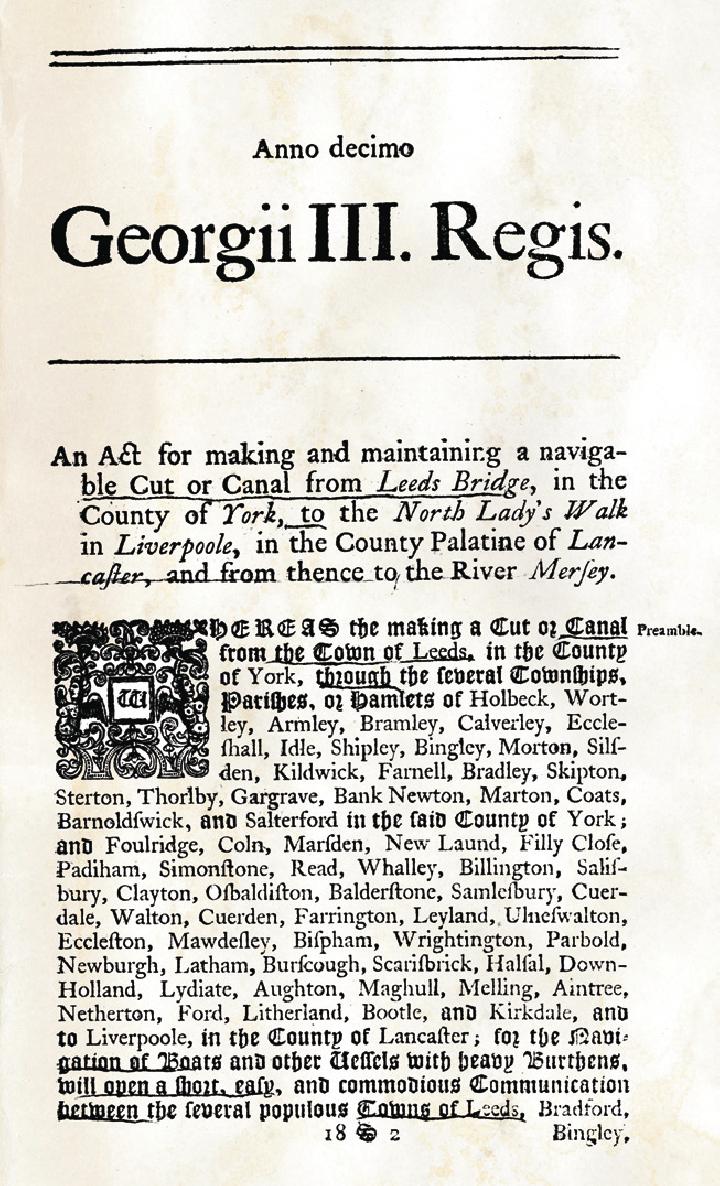 The first page of the 1770 Act of Parliament for building the canal on the original route. 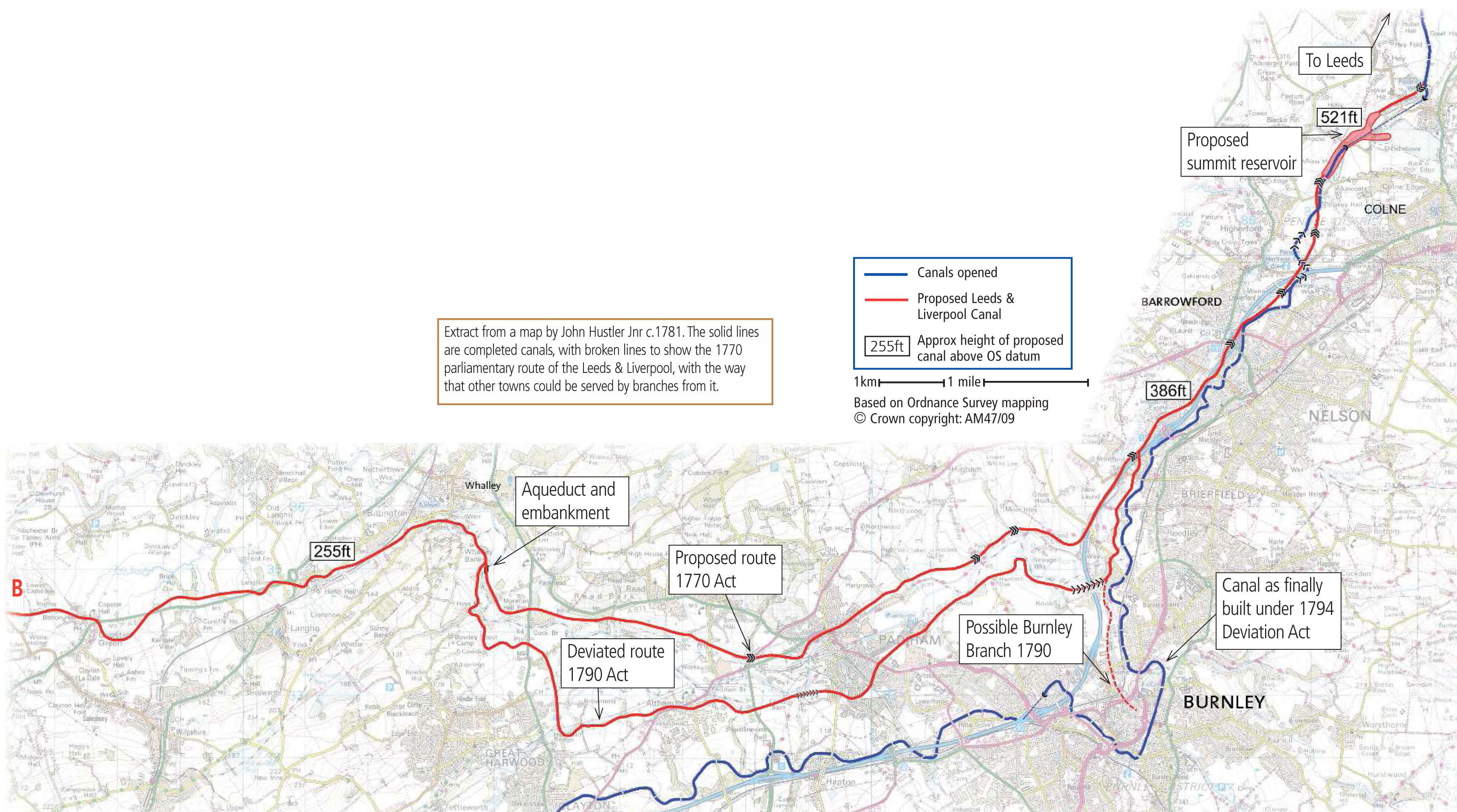 This last change necessitated spacing out the locks at Barrowford, creating a more sinuous route.

The long intervening Lancashire section had been delayed for many years whilst heated discussions took place about possible deviations to pass through the expanding industrial areas of East Lancashire, which it was originally suggested could be served by future branches (see John Hustler Jnr c.1781 map).

The parliamentary route was through thinly populated areas with few major problems other than the crossing of the River Calder near Whalley by an embankment and an aqueduct about 100ft above the river bed, on which some preparatory work may have started.

Twenty years later a deviation south of the river was authorised to avoid this daunting work, and to bring the canal nearer the industrial towns, with a possible branch to Burnley still in contemplation – but it was not enough to meet the pressure and a much more radical deviation followed in 1794.

This final alignment started above the proposed bottom lock at Barrowford and was built through Burnley and Blackburn, eventually making a through connection to Liverpool in 1816 via Wigan.

Of the original scheme there remained only an unfinished lock pit at Barrowford, and a few yards of canal at Parbold, later adapted for use as a dry dock.

Longbotham’s original large-scale survey for the whole canal is preserved in the West Yorkshire Archives (QD5/4/1).

See also Hadfield & Biddle's Canals of North West England (2 vols), and Mike Clarke's The Leeds & Liverpool Canal, Proposed a History and Guide, for much useful summit reservoir background (and thanks to Mike Clarke for additional information). 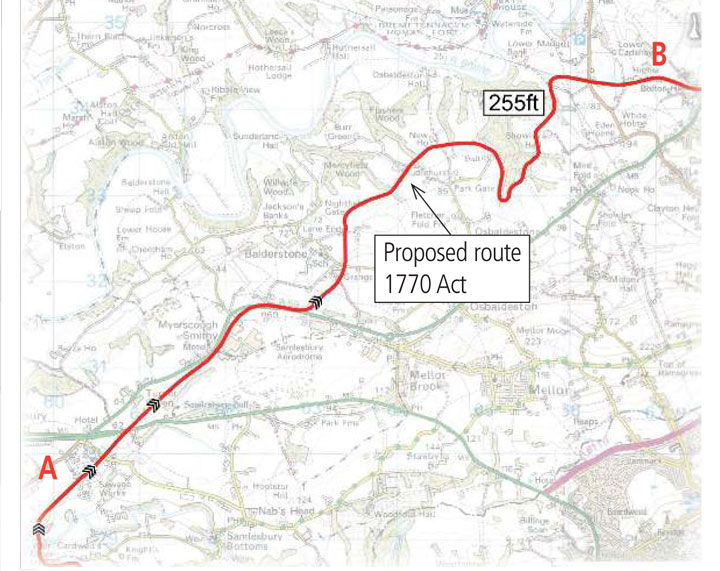 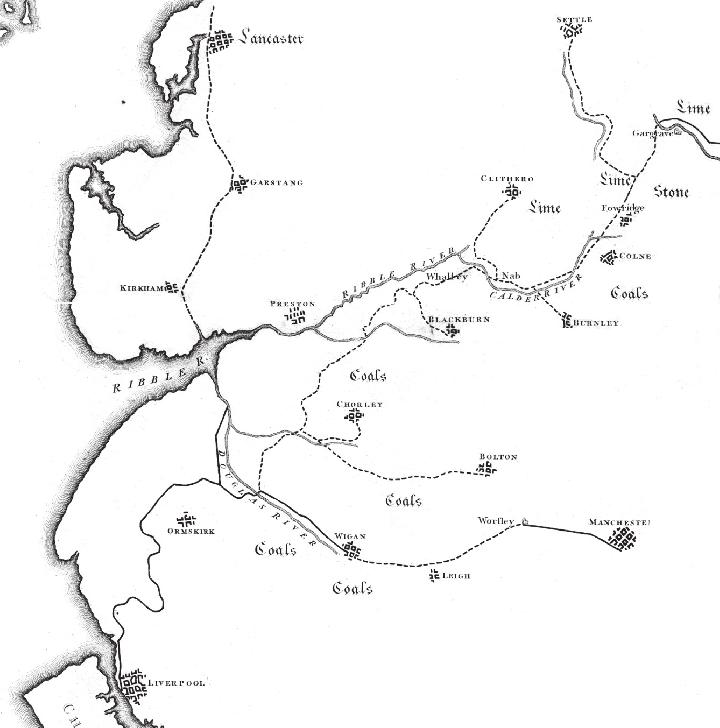 Extract from a map by John Hustler Jnr c.1781. The solid lines are completed canals, with broken lines to show the 1770 parliamentary route of the Leeds & Liverpool, with the way that other towns could be served by branches from it.

Settle and Ingleton (Canals That Never Were)