Short boats on the L&L

This is our free-access sample article from the Spring 2022 NarrowBoat. 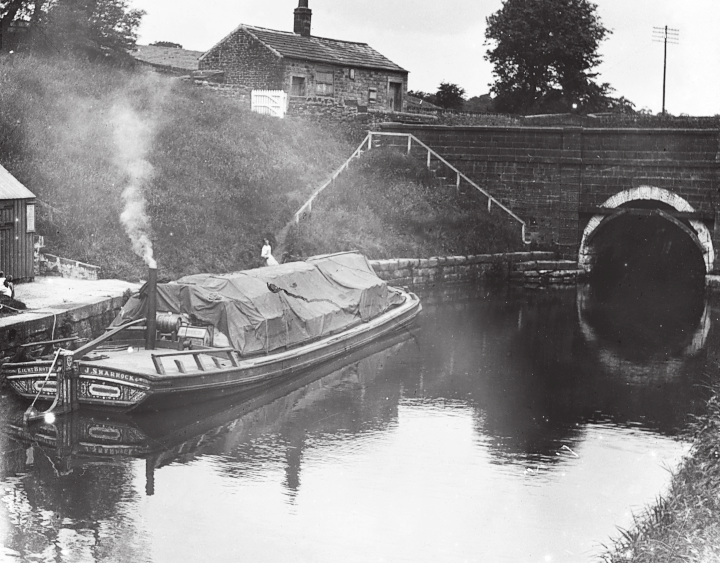 At the south-western Barrowford end of Foulridge Tunnel lies the transom stern short boat Eight Brothers, owned by J. Sharrock. It’s shown waiting for the next tow through the 1,640 yard long tunnel by the canal company’s steam tunnel tug. These timed tows were every two hours during weekdays.

Eight Brothers shows the distinctive decoration associated with short boats, with its detailed scrolled panels and lining. The pitched roof dog kennel and water barrel are all profusely decorated and are topped off with ropework on the rudder head, which has been scrubbed white.

Registration details for this boat have not survived, although it was most likely owned by Jeffrey Sharrock, who ran the Horse & Jockey beerhouse in Waddicar Lane, Melling, at Ledsons Bridge near Liverpool. Sharrock did indeed have eight sons at the period this image was taken, around the turn of the century, and also had a coal merchant business trading as J. Sharrock & Sons from the local canal wharf.

Several second-hand boats were bought before, during and after WWI. These included Two Sisters in 1909 with Evelyn in 1914. Elsie followed in 1917, then there were at least two more between 1925 and 1929 named Mary Alice and Mary, with Jane early in 1930. Jeffrey Sharrock died in 1916 and it seems the business was carried on by his widow and her sons.

By the late 1920s the family business had moved to the Red Lion Hotel, Scarisbrick Bridge, near Ormskirk. Their carrying activities were mainly involved in the coal and mineral traffics in the Liverpool district.

Several other members of the Sharrock family in different parts of Lancashire were also connected with boating. Some were based at Wigan, Blackburn, Buscough and Hulme in Manchester. The family were also coal miners and worked in the textile industry.

Other boats owned by the Sharrock family were Mary Iris, by Mrs Mary Sharrock of Wigan, bought second-hand from John Hayes of Westhoughton and steered by John Sharrock. It was registered in December 1905 but was only kept for 12 months, being sold following their deaths.

Two other boats known to be owned by the Sharrocks were both named Bill. A carrier of coal and manure, William Aspinall bought his boat from Thomas Sharrock in 1925, while John Sharrock of Botany at Chorley bought his boat from John Malley in 1924. The latter was originally a Leeds & Liverpool Canal Co craft.

In the latter part of the 19th century, various members of the family steered boats for a number of traders including the Wigan Coal & Iron Co of Kirklees Hall, Wigan, the Rose Bridge & Douglas Bank Collieries Co Ltd of Liverpool, and the Midland Pottery Co Ltd, stone bottle-makers of Melling.

During the 20th century, the family steered boats for Joseph Nightingale, coal merchant of Blackburn, and the old-established business of Richard Williams & Sons Ltd, coal and timber merchants and carriers of Liverpool. Another was the Wigan Coal Corporation Ltd, formed as a successor to the Wigan Coal & Iron Co specifically to handle the coal business.

This image showing two fully laden horse-drawn short boats gives a clear view of their distinctive shape and design. These craft were typical of those carrying coal and heavy bulk cargoes with open holds. The nearest craft is heavily loaded with bricks, while the furthest craft is carrying coal.

Unfortunately, the owners of both craft cannot be identified but they clearly belong to carriers engaged in heavy haulage, of which coal formed the bulk cargo, with sand and stone to a lesser extent. By World War II the total traffic passing on the canal was about 1.5 million tons, of which approximately 1 million tons was coal; the remainder being grain, flour, sugar, cocoa, wool, cotton, timber, soap-making materials, lead, stone and cement. Carriers hauling coal formed the majority of the boat-owners. 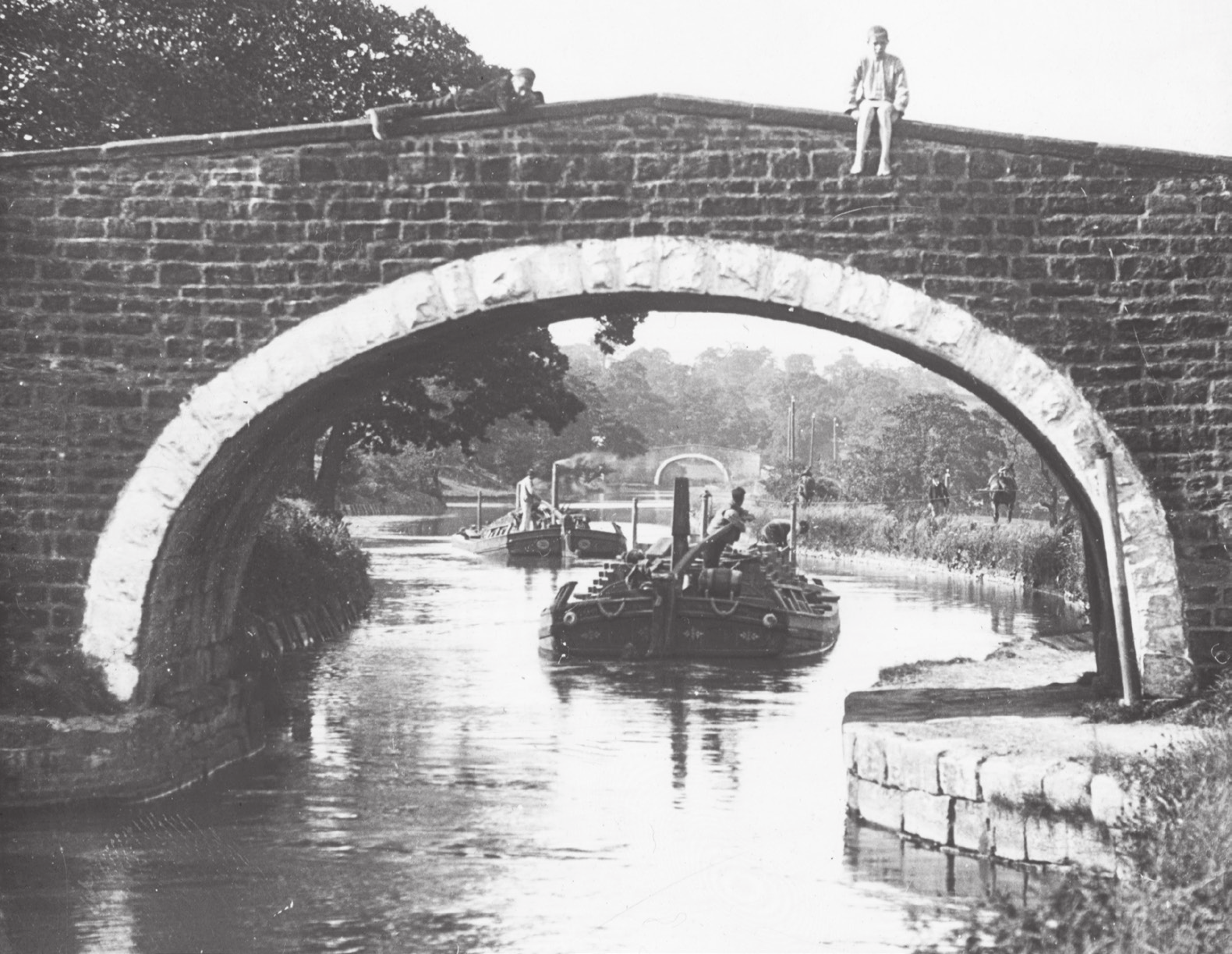 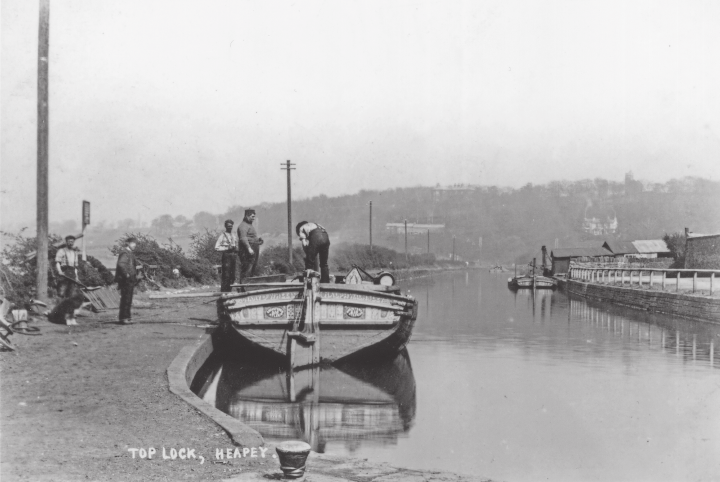 Mary of Wheelton being unloaded above Top Lock at Wheelton.

This view (above) captioned as ‘Heapey’ is actually Johnson’s Hillock Locks, nearby on the Johnson’s Hill Branch of the cut. The picture was taken above the Top Lock at Wheelton, looking north-east towards Rye Bank in the distance, and shows Mary of Wheelton being unloaded. It was owned by Ralph Walmsley, who was based at Wheelton, and was bought in the summer of 1902, together with James. Both were registered at Leigh and were acquired second-hand, most likely from the Wigan Coal & Iron Co, which disposed of several of its old boats about that time.

Prior to this, Ralph Walmsley was one of the family working as boatmen for the Wigan Coal & Iron Co. He continued in the company’s employment until about the mid1890s when he switched to Peter Todd & Co of Wheelton, working its boat, Margaret. The company were cotton spinners and manufacturers with other works in the locality and, interestingly, Ralph’s father was a weaver.

Ralph acquired at least one other boat in 1905 named Thomas, bought second-hand from John Berry of Botany, Chorley. He was a coal dealer and publican of the Railway Inn, and was in his late 70s when his boat passed to Ralph Walmsley and was registered at Blackburn.

Ralph lived in Higher Copthurst, near the Top Lock with his wife, his nephew James Smith, and his niece. James worked for Ralph steering one of his other boats. In February 1906 he was recorded as the master of Mary of Wheelton at Leigh. Another member of the Walmsley family worked Thomas about the same time. Ralph’s carrying business came to a halt on 2nd December 1908 when he died. 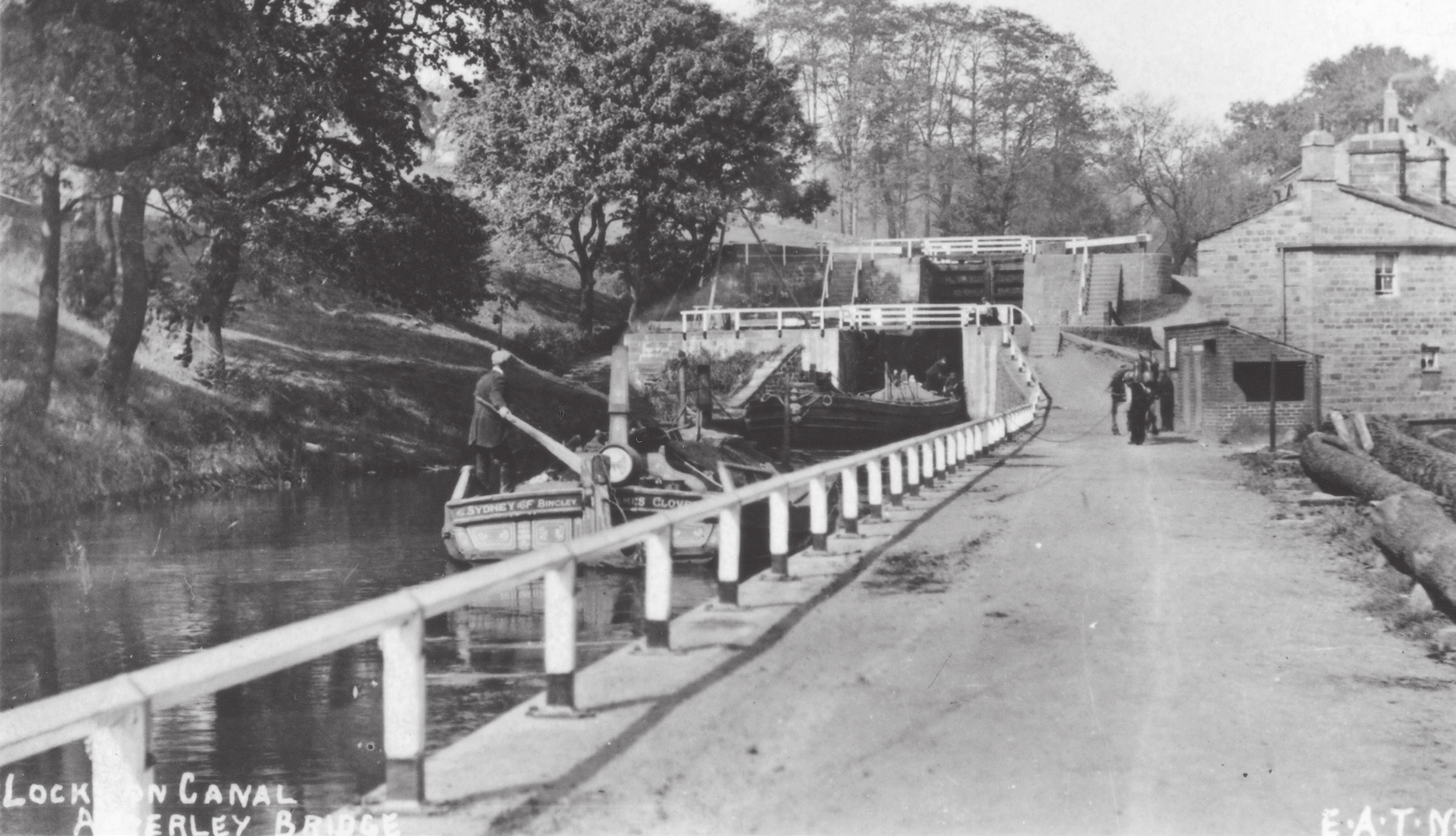 This postcard view of Dobson Locks shows the loaded short boat Sydney of Bingley owned by James Rhodes Glover, coal merchant of Hopewell Coal Wharf, Bingley. Sydney’s steerer is holding back while a boat running light exits the bottom of the staircase and its horse driver prepares to make sure the towline clears the boat’s mast, chimneys and crew.

Sydney was built new for Glover by Henry George Teall of Apperley Bridge and launched on 12th October 1898. It was registered at Leeds the following month and was named after Glover’s son, born in May 1897. It must have been one of the last boats Teall built as shortly after he moved away and the dock was taken over by George Edward Ramsey, who also later built new boats for Glover. Coal and stone were the main cargoes.

The family business was actually started by James Glover’s father, also called James, who was a coal merchant at Shipley by 1878, and had two boats named Violet and Charles. Shortly after he moved to Bingley, he died in October 1888 and James Rhodes Glover took over.

They were based at Hopewell Coal Wharf at Bingley which was on the pound below the Three Rise Locks and facing onto Dubb Lane, near the town centre. The coal had to be landed over the towpath by barrow into the wharf area, surrounded by both worsted mills and residential houses.

Several second-hand boats were bought during the late 1880s and early ’90s from different owners, then from 1894 several new boats were bought, all built at Apperley Dock. Many of their boats were registered showing James Tempest of Ferrand Street, Bingley as master, indicating a long-standing relationship between Tempest and the Glovers, both father and son.

By the mid-1920s Glover was trading as a canal carrier and colliery agent attending Leeds Coal Exchange. Then, in the mid-1930s, the business was incorporated as boat-owners, canal carriers, coal, coke and builders’ merchants, and moved to Park Road Wharves, Bingley, on the off-side of the canal. Most of its coal was drawn from the West Riding of Yorkshire collieries and transported via the Aire & Calder Navigation through Leeds.

Thank you to Pete Harrison.