Chris M. Jones looks at an image of a freezing winter that reveals a story of local traffic on the Oxford Canal

This is our free-access sample article from the Winter 2021 NarrowBoat. 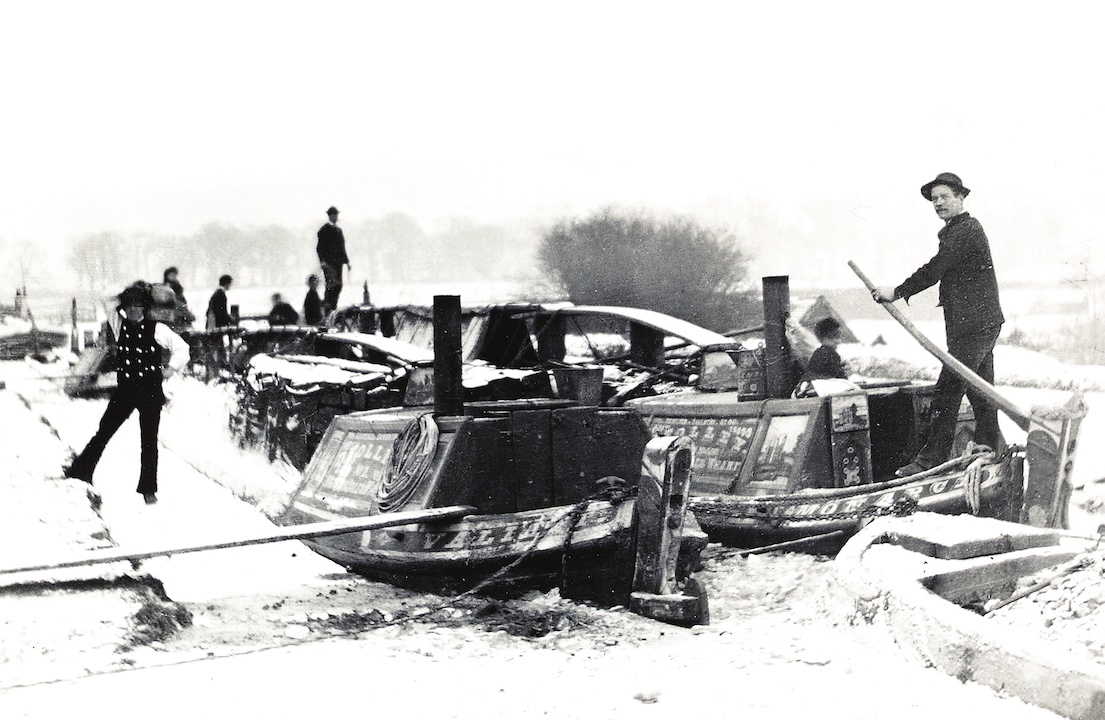 At the time this photograph was taken, around 1893, the two boats Monarch and Valiant were owned by David Tolley Jnr of Marston Doles Wharf, next to Napton Top Lock. This view is on the Coventry Canal near Sutton Stop, looking south-west.

The Tolleys were originally a family of agricultural labourers who had settled in Kirtlington near the Oxford Canal. David Snr was born in January 1835 and, like his father and older brothers, did the same agricultural work until the late 1850s when he moved to Oxford and was employed on the railway.

This was probably a clerical role as, shortly after his marriage in 1859, he became the canal company wharfinger and toll clerk at Oxford, living at Canal Wharf House. By February 1864 he had relocated to Napton Junction where he would remain as the Oxford Canal Co’s toll clerk until his retirement. However, this was not his only source of income as he rented land at Napton for grazing cattle.

David Tolley Snr’s second son, also named David, was born at Oxford in 1861 and, after leaving school, became an assistant toll clerk under his father at Napton Junction, aged 13 in 1874. In 1882 David Jnr became the wharfinger at Marston Doles Wharf and, together with his father, started their own coal business as David Tolley & Son. They bought two second-hand boats, Monarch and Valiant, and had them registered at Daventry in November 1886 with Thomas Coles as captain. The history of Valiant is unclear but Monarch was previously owned by boatman George Ayres, who mainly worked on the Grand Junction.

There were two wharves at Marston Doles. David Jnr occupied the Oxford Canal Co’s wharf above Napton Top Lock which had a house, garden, weighing machine and storage warehouse. Coal was, of course, brought to the wharf with other materials used in agriculture such as basic slag, which was a phosphate-rich artificial fertiliser. Cargoes stored and taken away by boat include timber and locally grown grain.

The other wharf was below the top lock on the off-side and was privately owned by the vicar of Priors Marston. It was primarily used for landing roadstone, upon which the vicar charged wharfage. David Jnr received 15 per cent of this as he collected the fee on behalf of the vicar.

In 1888 David Jnr married and about that time he also expanded his business by becoming a farmer locally and employing men to do the work. About 1893 boatman George Lenton started working the boats and is shown in the image standing on Monarch. Then in the late summer of 1894, Valiant was replaced with The Clyde, registered in September.

Initially, David Snr used collieries such as Moira at the head of the Ashby Canal, and Wyken on the north Oxford Canal near Sutton Stop. He built up a fair trade retailing coal but, after the opening of the Great Central Railway for coal traffic in 1898, the station at Charwelton, near Priors Marston, started to take away the local coal trade by canal and he began to struggle.

George Lenton and his family continued to work the boats, probably until the pair were sold in the spring of 1902. From then on, it’s likely Tolley used independent boatmen contractors to carry his cargoes, hired as and when needed.

David Tolley Snr retired as toll clerk at Napton Junction in July 1898, then continued as a farmer until he died in October 1907. His son David Jnr continued as a farmer, coal merchant and wharfinger at the Doles until 1911. Several traders in the locality using the canal also moved away that year due to railway competition and David Jnr struggled too. He was ordered to quit the wharf on 29th September 1911.

David Jnr was replaced by coal, corn and forage merchant, William Edmund Bull, formerly of Hellidoh. Tolley moved away to the nearest town at Southam and continued in business as a coal merchant until he retired. Although he used the railways, he did occasionally revert to the canal to supply his customers’ needs, particularly with cargoes of basic slag to Napton and Marston Doles. He had a working relationship with Bull, whereby David Jnr would buy the slag and transport it at his own cost, then Bull would sell it to their respective customers, all to their mutual benefit.

Of all the different weather conditions faced by boaters, it was frost and ice that caused most problems. This was not only because it made locks and towpaths hazardous and prevented the movement of boats, but also the time taken waiting for the ice to thaw would drain food supplies for boatmen, their families and their horses. If they were tied up near shops or stores and could purchase food, their finances were soon depleted, forcing them to ask their employers, or those to whom they were contracted, to provide them with an advance on their pay to tide them over.

At least the coal-boaters carrying a load could always dip into the cargo to keep themselves warm and cook food, but others carrying tar, roadstone, timber or other cargoes might have to rely on scavenging from others, or even ‘freeman’s’ when no one was looking to top up the coal box. The same went for empty boats. Those waiting for cargoes could be a long time as collieries would refuse to load if the cut was icebound. If the ice could be broken at the coal loading or landing wharf, raking the canal bottom with a keb, or long rake, might yield a bucketful of fuel. This would be done covertly, however, as the coal was still the property of the colliery or merchant, even if it was under water.

If the canal company was running its ice-boat, the boatmen had the opportunity to earn much-needed cash by hiring out their horses to tow the boat, or even crewing it if there was room aboard. This only happened if the canal company felt the cost and expense were justified; if more heavy frosts were predicted, there might be several days’ wait until temperatures increased before any attempt was made. Canal companies saw no point in breaking the ice if it was going to freeze solid again several hours later.

Even when the ice was broken, the boatmen might not want to travel. Carriers could compel their employees to move but many coal-boats were operated by independents, and they would not leave a convenient supply point if it looked like they might be iced in the next night out in the middle of nowhere.