Picturing the Past: NarrowBoat, Winter 2020

Chris M. Jones studies a picture-postcard view of a stoppage on the Grand Union Canal

This is our free-access sample article from the Winter 2020 NarrowBoat. 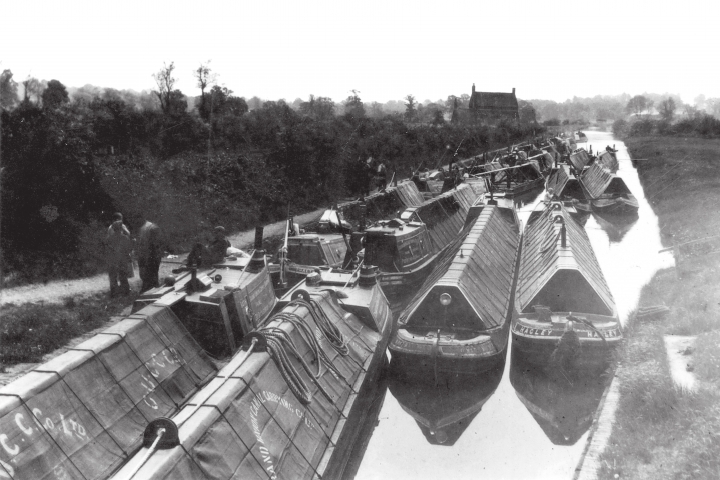 This image of the Grand Union Canal was taken at Buckby Bottom Lock No 13 and, although it is undated, judging by the various liveries of the boats shown, it probably dates from between 1938 and 1940.

There are at least 11 pairs visible, with the nearest three being owned by the Grand Union Canal Carrying Company Ltd and the closest two pairs being Large Town Class boats. On the left is all-steel motor Bath, built by Harland & Wolff of Woolwich in September 1936, together with its unidentified wooden Large Ricky butty built by W.H. Walker & Brothers of Rickmansworth. By 1939 butty Knebworth was paired with Bath, captained by John Wilson.

On their left is the all-steel Large Northwich motor Whitby, built by W.J. Yarwood & Sons Ltd in April 1937, with its wooden Large Ricky butty Hagley, built in August 1936. Behind Bath is GUCCC butty Phaethon with its unidentified wooden motor, which are both loaded with coal. Its original motor was Orpheus, which had been allocated a different butty by March 1938. Phaethon was built by Walker’s as a Small Ricky boat and entered the fleet early in June 1936, before being sold to carrier L.B. Faulkner in December 1943.

Interestingly Bath, together with Whitby and Phaethon, are painted in theoriginal GUCCC livery of two shades of blue or two shades of green, while Hagley, Phaethon’s motor and Bath’s butty are finished in the subsequent coronation livery of red, white and blue. This was brought in after the company changed its address to the Port of London Authority Building in the coronation year of 1937. Another point of interest is the different types of stencilled lettering on the cloths of these craft. There was a surprising amount of variation in the livery of GUCCC craft, both in their colour schemes and lettering.

Ahead of Phaethon is a pair of Erewash Canal Carrying Company Ltd craft, the motor being one of its Yarwood-built examples, with their distinctive rivetted steel cabins. The Erewash had two of these iron composite-hulled motors built, named Elm and Cyprus, during the summer of 1935. This Leicester-based pair appears to be carrying granite roadstone, most likely from the Mountsorrel granite quarries on the navigable River Soar section of the Grand Union Canal. Alongside the Erewash boats is a north-bound Fellows, Morton & Clayton pair.

Even though the use of motor-boats had become the norm by this date, there were still vestiges of old horse-boating practices. Most of the butties visible in this image have running blocks on the top plank, which were used to take the strain from the horse’s shoulders when starting out from a lock.