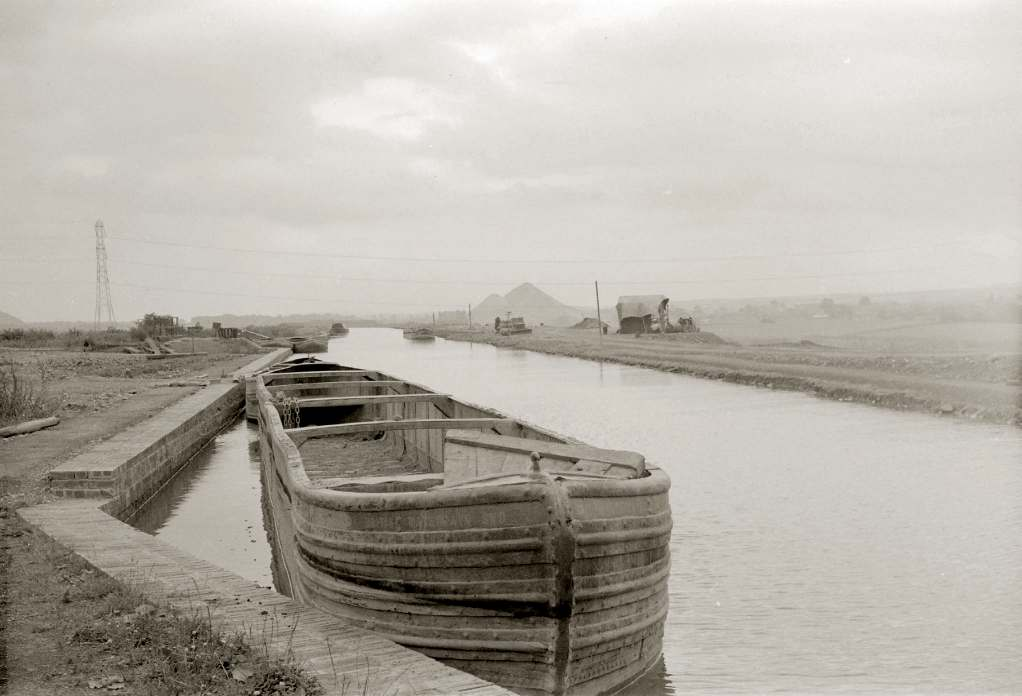 Building up the banks near High Bridge.

Exploring any abandoned canal can be problematic but few offer the challenges presented by the Cannock Extension Canal, north of the A5/M6 Toll. This lost section of canal represents the northernmost extremity of the original Birmingham Canal Navigations network and was linked into the 13 Churchbridge Locks, making a connection with the older Hatherton Branch of the Staffordshire & Worcestershire Canal. These late additions to the BCN network were wiped off the map by massive opencast coal-mining operations in the 1950s and ’60s. While the canal track is long gone, a ghostly echo is emerging in the shape of a growing collection of archive photographs, which I have been piecing together, image by image, in an attempt to create a comprehensive end-to-end record of this elusive waterway.

The 5¾-mile Cannock Extension Canal was one of the last waterways built, constructed between 1857 and 1863 by the BCN, running north from Pelsall Common on the Wyrley & Essington Canal to a basin in Hednesford, near Cannock. The route of this lockless canal took it past numerous collieries working the Cannock Chase coalfield and these all fed into a collection of busy canalside wharfs where open day-boats were loaded with coal destined for the industries of the Black Country.

You only have to look at a random selection of aerial archive images of the Black Country to see just how many chimneys protruded into the skyline, and even in the early 20th century each one had to be fed with a steady supply of coal. Coal was the reason for the construction of this hugely successful extension canal, and ultimately coal was the cause of its demise, less than 100 years later.

With the high-quality coal measures of the Black Country exhausted, new sources of fuel were needed to power the region’s industry, and the Cannock Chase Coalfield filled the gap. The nature of this narrow canal contrasts sharply to the adjoining winding Wyrley & Essington Canal. The latter belonged to another era when canals followed contours,

but this new waterway utilised railway construction techniques to take direct routes using embankments and cuttings, avoiding locks and thus speeding the passage of boats. The Cannock Extension Canal was only half of what was planned, and a continuation across Cannock Chase was anticipated using a vast cutting to reach more collieries at Brereton, near Rugeley. In the end this more northerly area was served by the Trent & Mersey Canal and the Cannock Extension Canal stopped at Hednesford Basin. 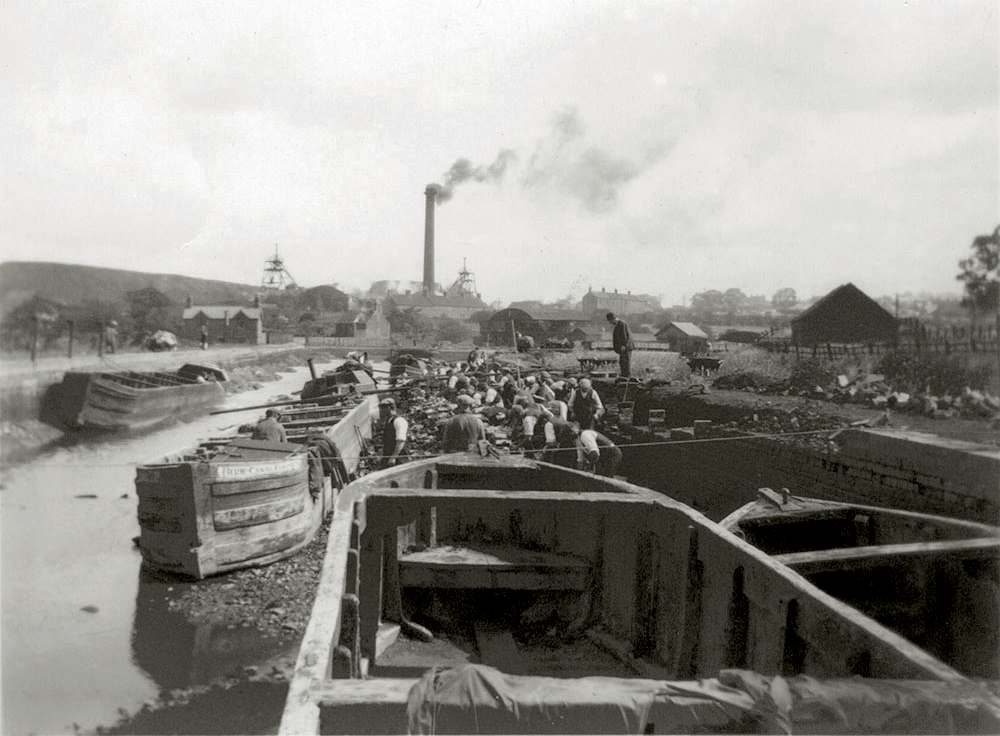 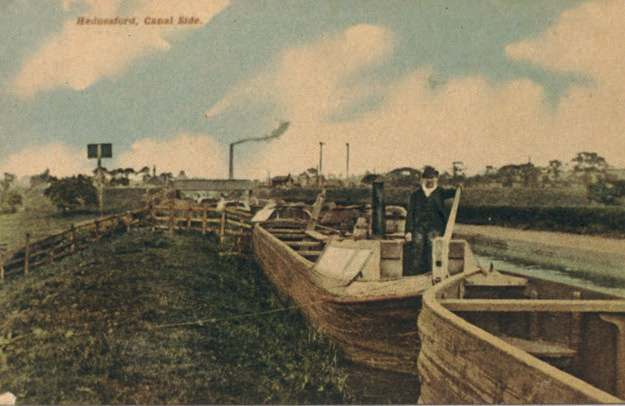 Moored boats at Hednesford in 1945. 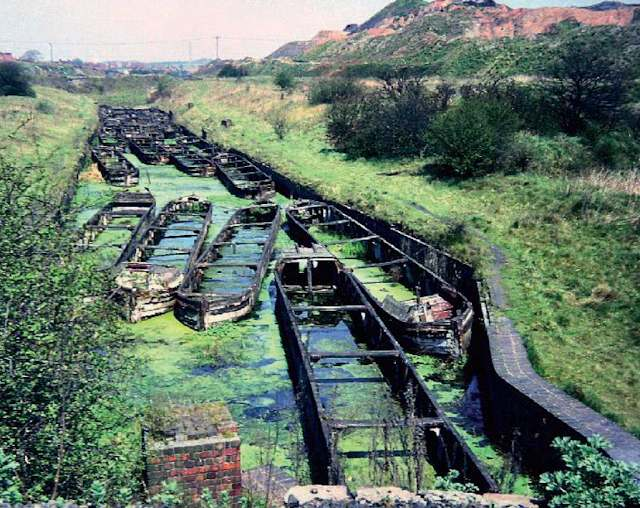 The Cannock Extension Canal was unusual in that it was built entirely without locks on the 473ft Wolverhampton Level, and formed part of a level pound that extended for about 55 miles. This meant that boats loaded with Cannock coal could reach markets in Walsall, Wednesfield, Wolverhampton, Tipton, Dudley and Smethwick without passing through any time-consuming locks.

The flat terrain proved to be a massive advantage to canal-carriers who were able to tie several coal-boats together and tow them, initially behind horses, though latterly up to five loaded day-boats were hauled behind a single powerful tug-boat. Even in the 1930s, long after the rest of the canal system had fallen into decline, the Cannock Extension was a busy place with tug-boats mingling with up to 150 horse-drawn boats each day, moving millions of tons of coal a year.

Not only was it possible to tow several boats at once, the dimensions of the canals were such that larger than normal narrowboats could be used, carrying greater loads of coal. These outsized craft were referred to as Hampton boats and were up to 85ft long by 7ft 9in wide and theoretically capable of carrying 45 tons (a standard narrowboat carried up to 24 tons). These bluff-fronted wooden leviathans of the Wolverhampton Level were often hard to control on the narrow, shallow and winding Wyrley & Essington, and in the latter days could rarely be loaded with more than 40 tons. The craft can sometimes be recognised in old photos by the use of five cross beams instead of the usual four, and to help steer their extra bulk they were often fitted with detachable additions to the rudder called ‘babby ellums’. 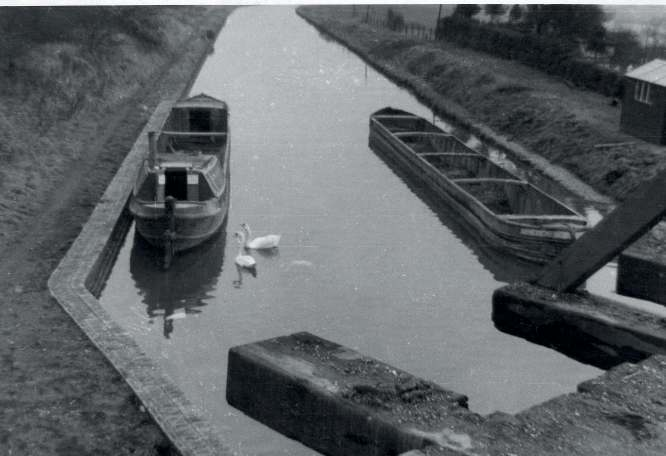 Looking east from Silvester’s Bridge in the 1950s. 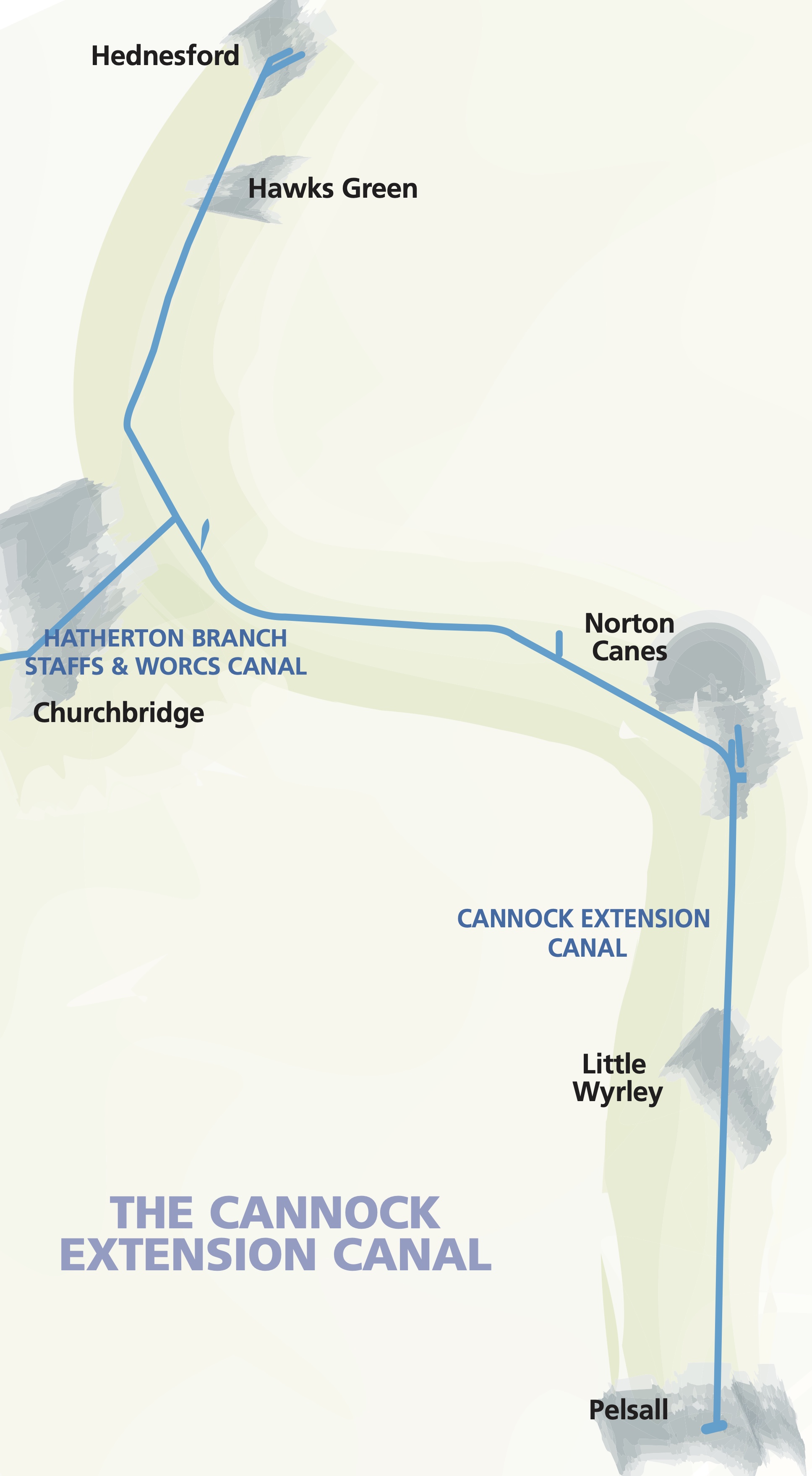 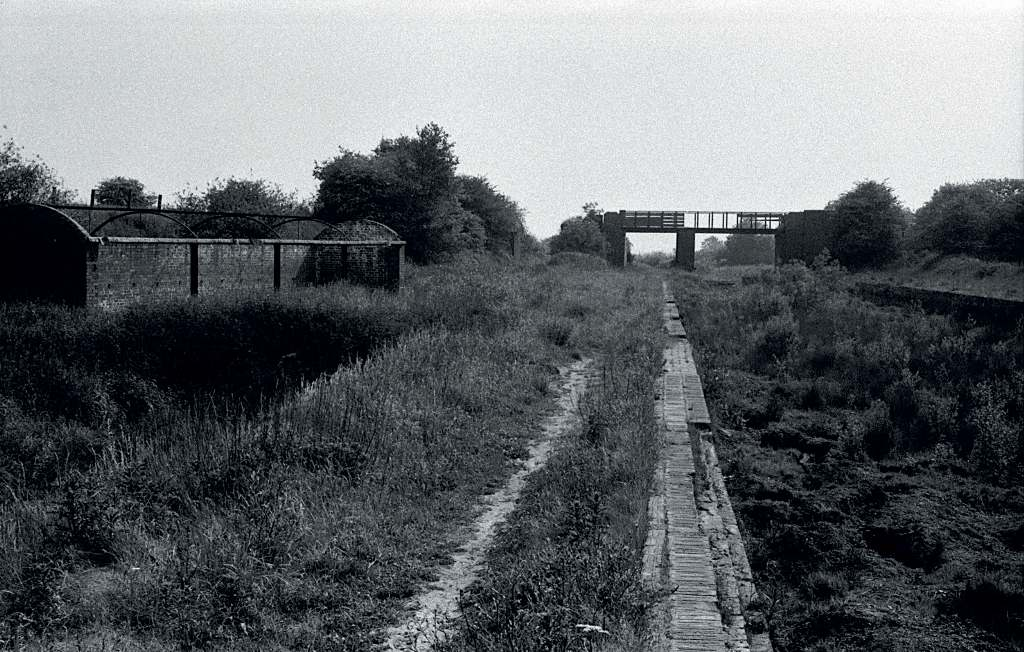 Stables at Hednesford with Hemlocks Bridge behind.

The Staffordshire & Worcestershire Canal Company’s Hatherton Branch was its only significant branch canal. It followed the Wyrley Brook east from the summit pound at Calf Heath near Gailey to a basin at Bridgtown, serving as a transport hub for the collieries in the Great Wyrley area, which were exploiting one corner of the new Cannock Coalfield.

While the branch canal was very successful, the owners of the Staffs & Worcs could see a greater prize a bit further up the hill to the north-west, where a much larger portion of the coalfield had been discovered, and which the BCN’s Cannock Extension Canal was being built to exploit. A link to the Staffs & Worcs Canal would help the mine owners sell coal to the canalside industries of Kidderminster, Stourport and beyond, and to this end the BCN purchased a strip of land, mostly from the Marquis of Anglesey, to connect the Cannock Extension at Rumer Hill to the Hatherton Branch at Bridgtown.

While the BCN bought the land, it didn’t have the resources or inclination to build the 13 locks. In the end the Churchbridge Locks Branch was constructed as a joint enterprise, with the land provided by the BCN, and the locks built and paid for by the Staffs & Worcs Canal Company.

In some regions the foundations of coalfield canals were protected from undermining, but not here. The extensive mining riddled the ground like Gouda cheese, and the coal extraction resulted in massive localised subsidence. This instability led to a need for a near-constant reconstruction programme to keep the canal artery flowing, and in the end the elevated canal embankments became the defining feature of the waterway. 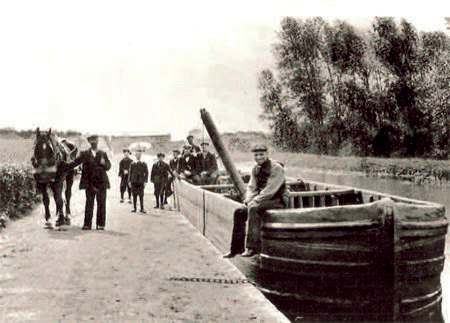 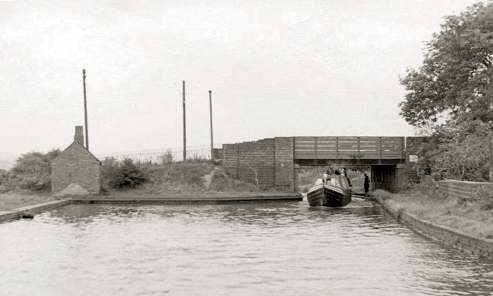 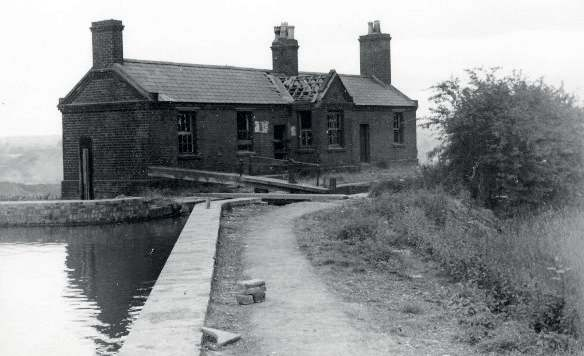 PUTTING THE PIECES TOGETHER

The physical geography of the Cannock Extension Canal does not help in trying to create an accurate and comprehensive photographic record. The old aerial photographs of the Cannock coalfield reveal a pleasant but unremarkable rural scene, devoid of many landmarks, save the spoil tips created by local coal mines. The problem with using these huge mounds of mining waste as landmarks is that they varied in height and shape over the decades, and were completely eradicated when the opencast mining took place. Added to this, the entire coalfield was on a plateau nearly 500ft above sea level, which means that there are few peripheral hills on the horizon to locate old photos with any real degree of accuracy.

Duncan Moore, another BCN enthusiast, joined me in the task of trying to piece together a picture of the canal based on archive images. Together we leapfrogged out bridge by bridge and corner by corner (there were only four bends) until all the intervening gaps had been spanned. But even this oversimplifies the process, because bridge profiles had a habit of changing.

Over time the whole area settled and sagged into the collapsing tunnels beneath, which meant that the associated bridges were regularly raised, patched and repaired. Ultimately, none of the traditional arched bridges lasted to the end of the canal’s life, something that is well illustrated by the remote Parkes Bridge near Hednesford. This was built as a traditional humpbacked accommodation bridge to serve Parkes Farm. The older photos taken between the wars show it leaning at increasingly odd angles, but the more recent images taken 40 years later show a flat-topped structure with steeper approaches.

When forensic examination of the photographs came up short, we turned to external inputs. Given the relatively late date of the abandonment of the canal, we were fortunate to establish contacts with some older boaters and local residents whose collective memories enabled us to pinpoint the location of most of the additional photos being uncovered, and correct inaccuracies.

But even this local knowledge wasn’t without its issues, and in some ways finding a consensus 60 years after the event was rather like trying to herd cats. 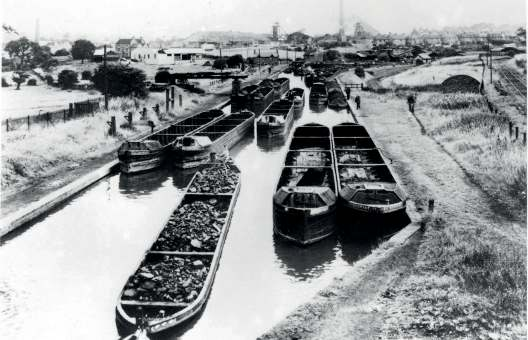 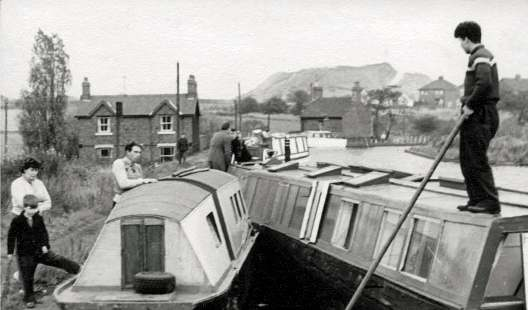 The last cruise on the canal reaches Hednesford Basin in October 1962. 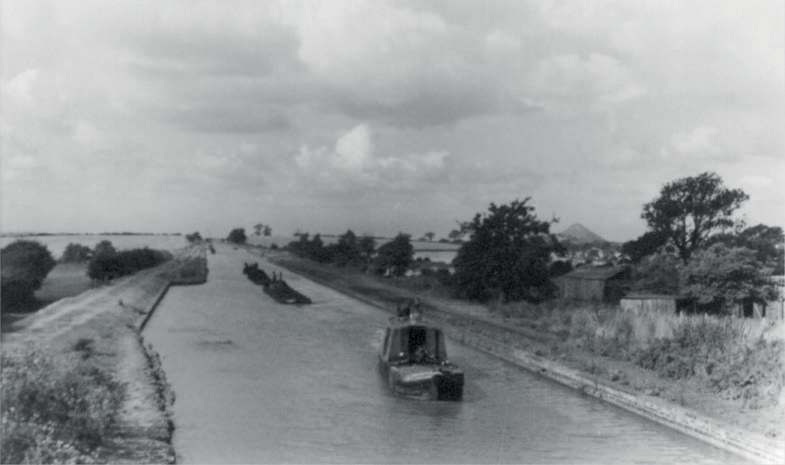 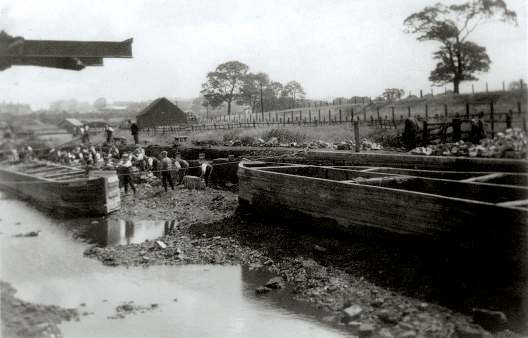 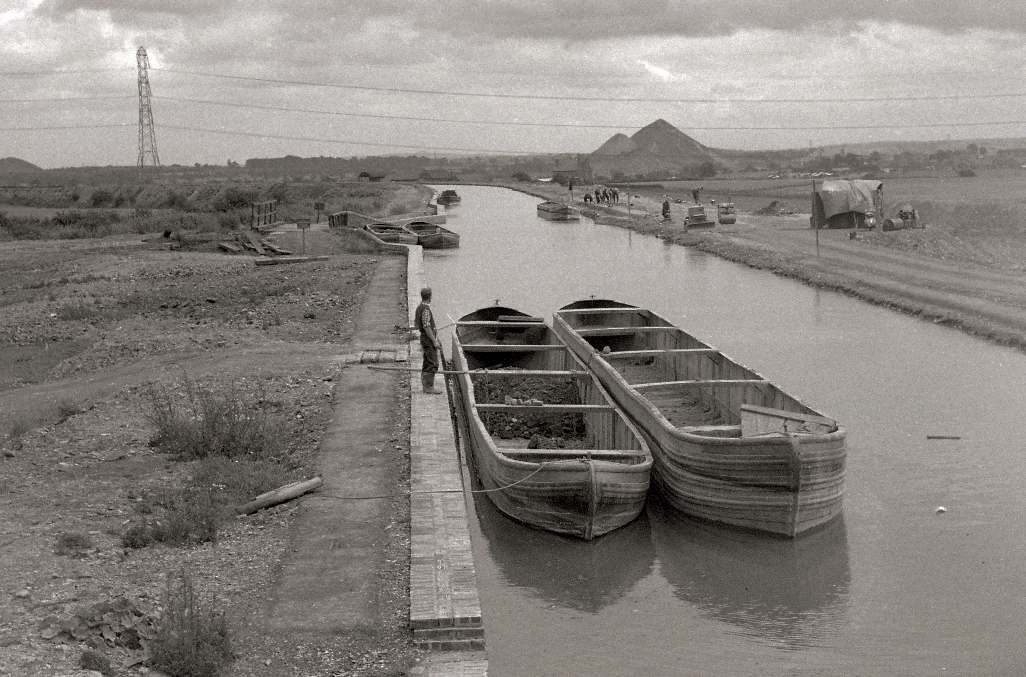 At times this subsidence was so bad that boatmen felt they could almost see the banks dipping closer to the water as they passed by, and each night some sections were stop planked off and emergency repairs effected before the morning convoy of empty boats arrived. The situation was so severe that there are reports of a day-boat being sunk near Norton Canes in the middle of the canal; before long not only had the cabin top slipped beneath the murky waters, but the routine convoy of loaded boats had passed over it without issue. Each day gangs stood ready with lorries full of spoil and boats loaded with clay from a huge storage mound near the A5, ready to reseal the channel. Later photographs show side-bridges settling towards the water and many banks were topped with multiple layers of newly laid bricks. In the end the emergency repairs couldn’t keep pace with the rapid settlement and one section at Leacroft dropped a staggering 21ft overnight in 1960.

With the coalfield nearly worked out by conventional methods, the National Coal Board decided there was enough coal left to justify the creation of a vast opencast mine. This would see the surface layers of overburden stripped off, including the now-obsolete canal, exposing the remaining coal that would be excavated by diggers and bulldozers. The end result was the huge Poplars opencast pit, which started near the A5 at Bridgtown, swallowing the Churchbridge Locks in the early 1950s. By 1961 the pit had expanded to the point it was encroaching on the Cannock Extension Canal at Leacroft, threatening its fragile stability still further. To facilitate further expansion, a decision was made in 1961 to block off the canal at the A5 crossing at Norton Canes, and, in so doing, abandon the northern 4¼ miles. The opencast mining operation continued through the 1960s, erasing all trace of the canal from Badger Bridge near Norton Canes though to its terminus at Hednesford. 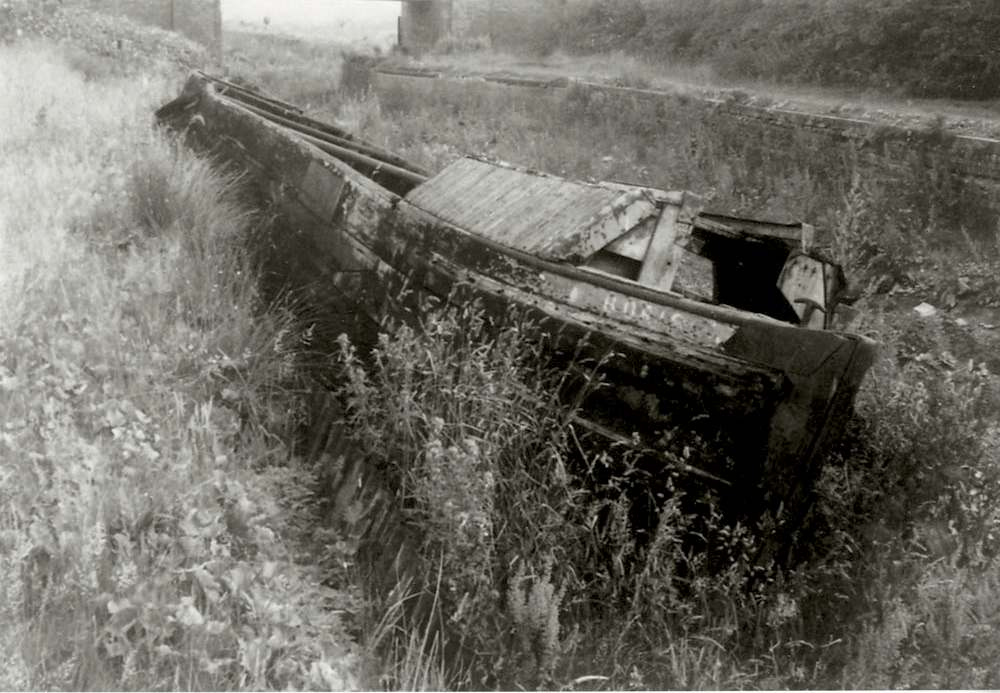 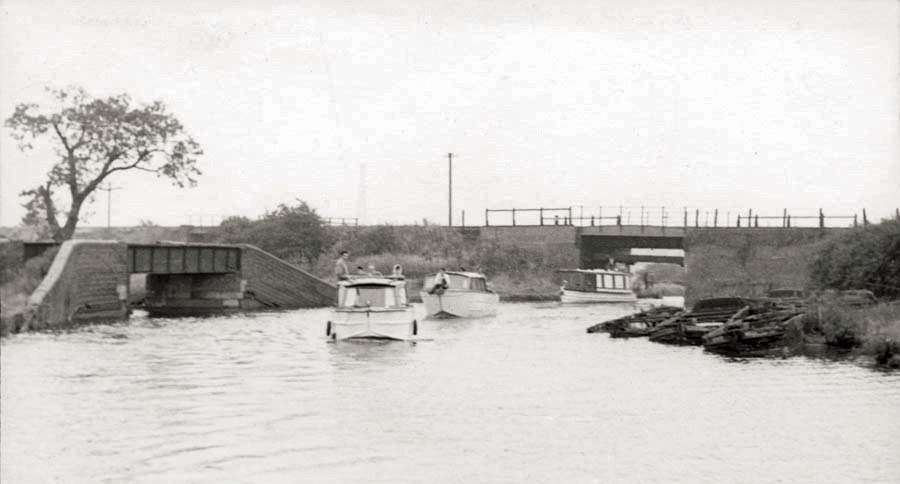 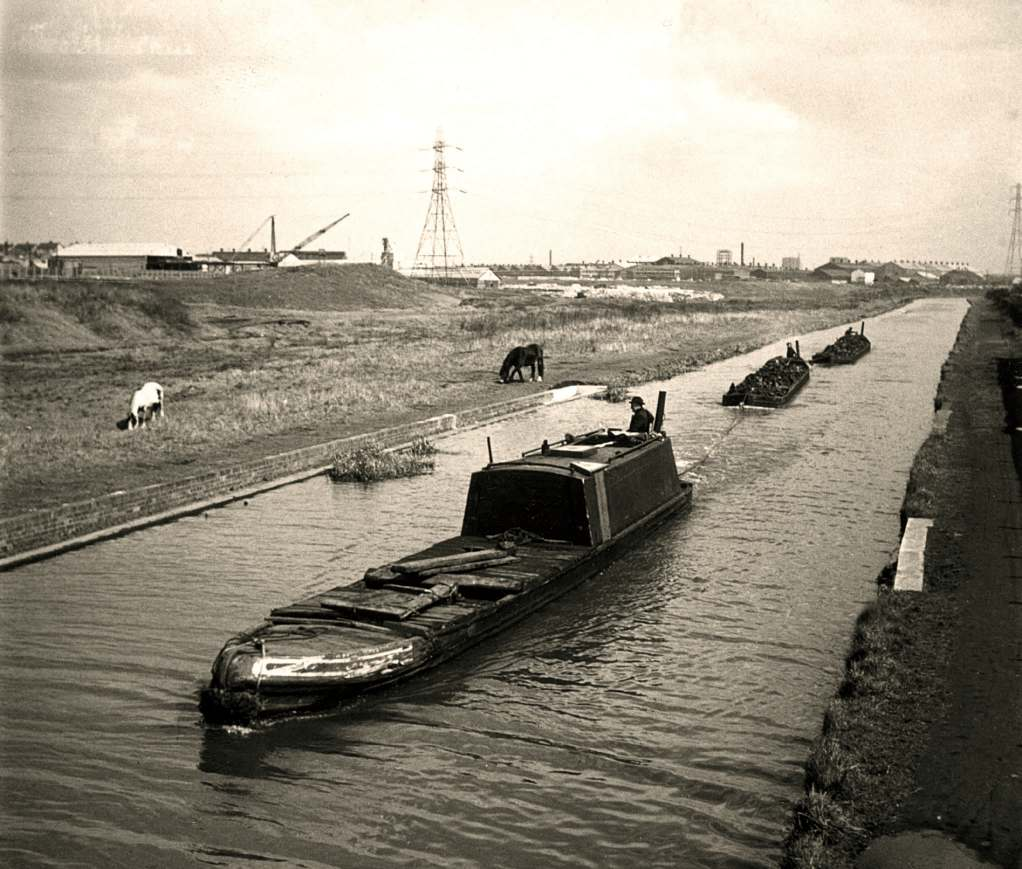 Cannock coal being transported elsewhere on the BCN.

The last commercial coal-boats left Hednesford Wharf in 1960 and soon there were over 200 redundant dayboats lying sunk along the canal and its adjoining basins. For a while lorries were used to move coal to canal boats at the nearby Anglesey Basin, but by 1967 this trade had come to an end. The vast area exposed by the Poplar opencast pit has since been backfilled and re-profiled, with it now supporting a large industrial and retail park, alongside an operational landfill site. While the area has been cosmetically restored, the levels are all altered, making tracing the route of the canal both difficult and unrewarding.

The final miles of the Cannock Extension Canal and Churchbridge Locks may be irrevocably lost, but that isn’t necessarily the complete end of the waterway. Although the physical canal track is long gone, as I collected archive photographs of the area, it became apparent that it might be possible to create a collage of images covering all the missing miles and bridges. Or put another way, with a bit of perseverance and imagination, to create a virtual cruise along a waterway that saw its last boat nearly 60 years ago.

In this age of drone and digital photography, it would be nice to think that a complete record of the abandoned line exists, but sadly this is not the case. So far, no complete collection of old photos of the Cannock Extension Canal have been found, and instead there are just odd images taken here and there by different photographers from various angles.

The full collection of images can be found within Andy’s Captain Ahab’s Watery Tales blog and also as a photostream within his Canal Hunter YouTube channel.

Abandoned Boats on the BCN (Working the Waterways)

Last Boat to Top of the Map (Early Campaigning)