This is our sample article from the Autumn 2020 NarrowBoat. Clicking the "excerpt" link will show the full article. 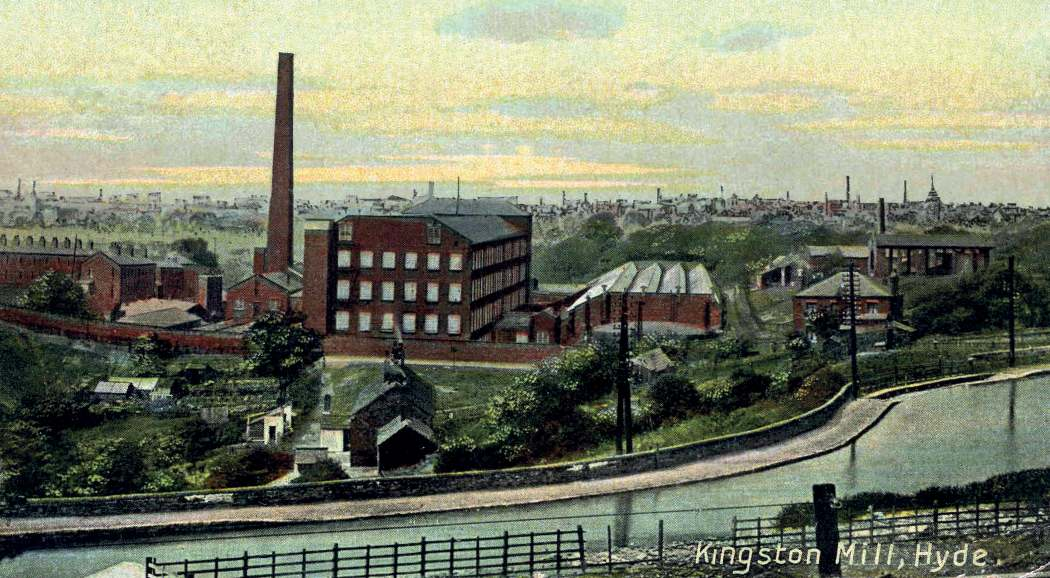 A card from the Hartles Series, which was probably a publisher local to the photograph’s location of Hyde. The card was posted in 1907, which was around the peak of the postcard boom. This view is difficult to place nowadays due to the demolition of the mills and the building of the motorway. It must have been a reasonably popular spot to justify the production of a colour card, which at this period was probably done in Germany.

One of the issues when collecting old postcards, by which I mean those from before the modern cruising era, is that places that have significance now were often not covered by publishers. This applies to the Peak Forest Canal – its junction with the Ashton Canal and its first few miles to Hyde are not, so far as I know, covered by older cards, though a number of modern cards exist of the junction.

In the early years of the 20th century, much of this area was covered by collieries, ironworks and railway lines, and the trees, which now line the canal, would have struggled to exist in the smoky atmosphere. On my own local canal, I remember setting out to revise the text of a towpath guide, which I had written around 1980, only to find that, 20 years later, much of what I had described was hidden behind a screen of greenery. Another interesting aspect is how many of the small towns and villages along the canal had their own publisher of postcards. 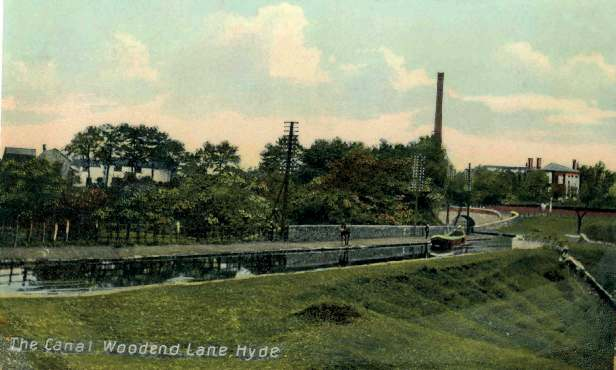 The Peak Forest Canal at Wood End Lane, Hyde, with Captain Clarke’s Bridge in the distance. The structure was named after Captain John Clarke, a younger son of the family who were Lords of the Manor of Hyde. Captain Clarke, who had served in the Royal Navy, lived in the adjacent Wood End House and was active in the management of the Peak Forest Canal, as well as the family estates. The bridge takes the towpath across the canal to avoid the grounds of Hyde Hall, the main seat of the family. There are a number of cards of the bridge, but this one is unusual, being from a distance and featuring a boat. Wood End House can be seen to the right of the bridge. This is another of the Hartles Series and was probably posted in 1908. 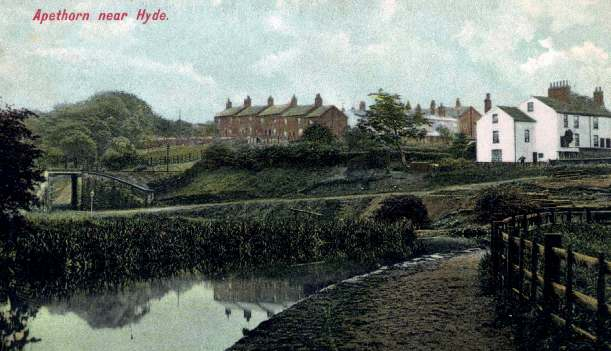 Apethorn is another place that appears of little significance today. The first view shows one of the tight bends typical of the Lower Peak Forest, as it clings to the slope above the River Tame. 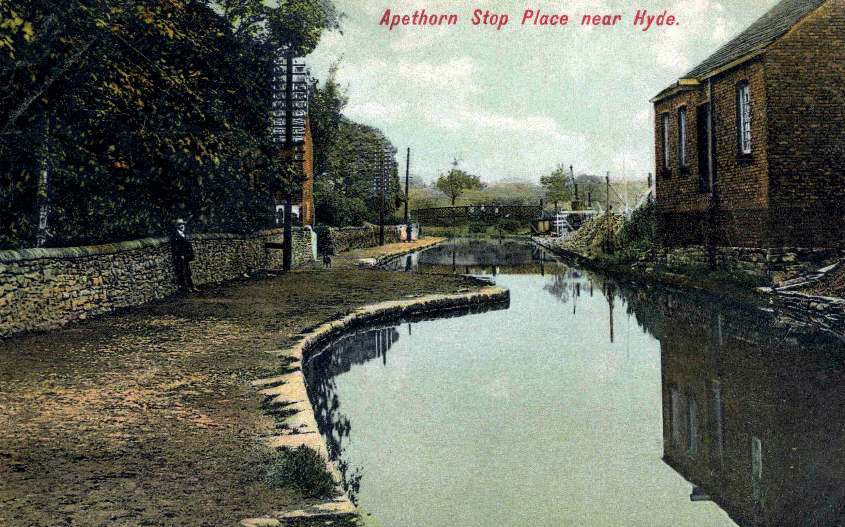 Apethorn Stop Place, near Hyde. Were it not for the narrows, this view would be unrecognisable today. At the time of the postcard, the large Apethorn Mill stood to the right. In common with many others, this has been demolished, though the site has been landscaped, rather than becoming an industrial estate, probably due to poor road access. This is yet another card from the Hartles Series, unposted, but clearly from around the same 1907/8 date as the previous cards. 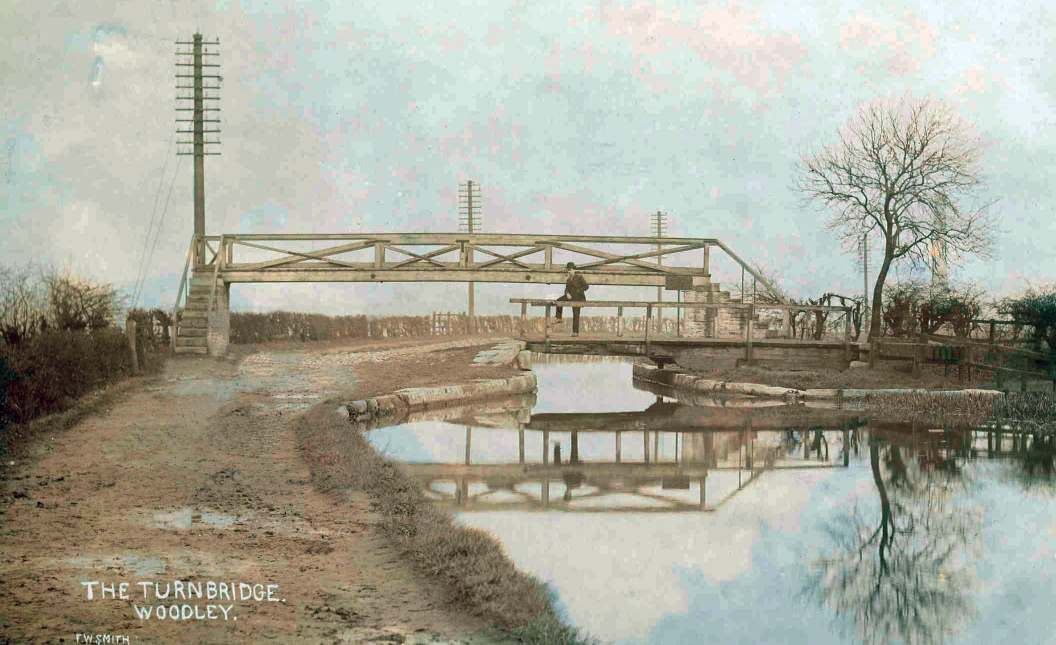 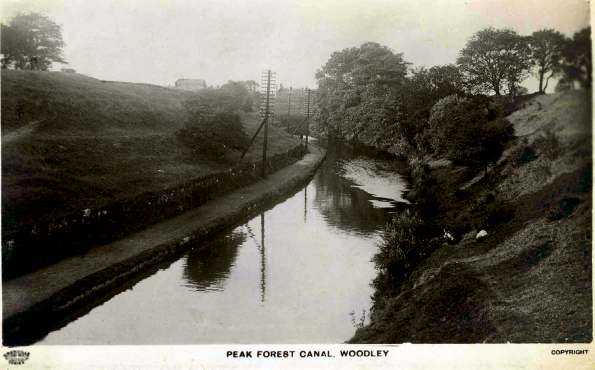 Woodley Cutting is also much changed from this rural scene. The photographic card was machine printed by Grenville Series of Stockport, which was a significant producer throughout the area. Although posted in 1937, the card had previously appeared in colour, of which I have an example posted in 1918. The image probably dates from before World War I. It was not unusual for images to run for many years; some pre-WWI Francis Frith views on the Shropshire Union Canal were still turning up in the 1950s and ’60s with subtle deletions of boat horses and the like. 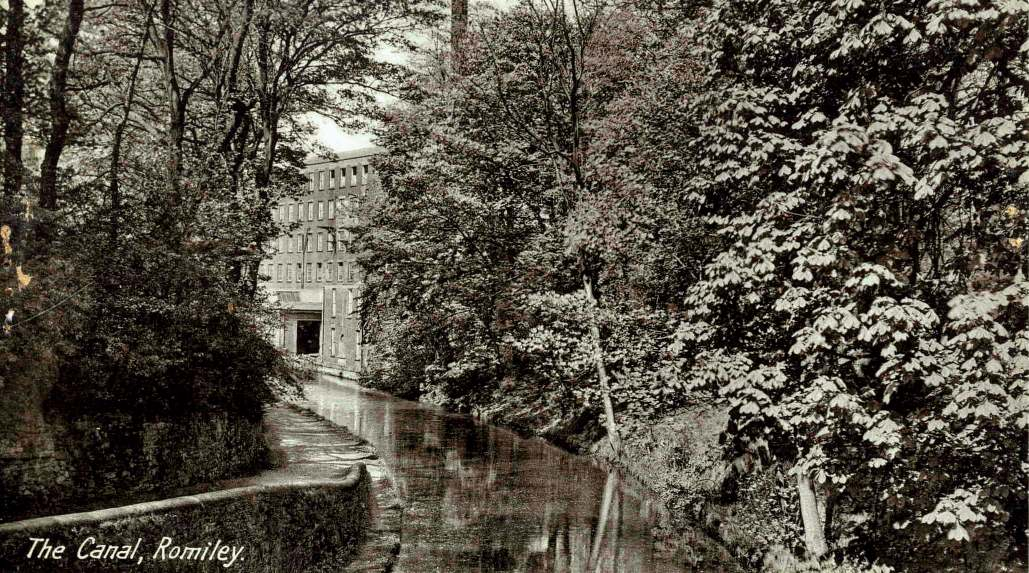 One of the few cards I have seen of the Peak Forest by a national firm, R.A.P. Co Ltd of London. This shows Oakwood Mills at Romiley from above the western portal of Hyde Bank Tunnel. The date is unknown. 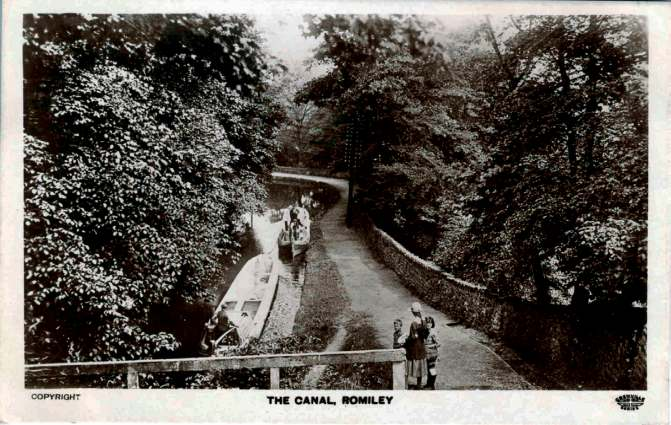 A view by Grenville Series from above the eastern end of Hyde Bank Tunnel, which was posted as late as 1938. The two boats may possibly be maintenance craft, judging by the number of men on the far one. 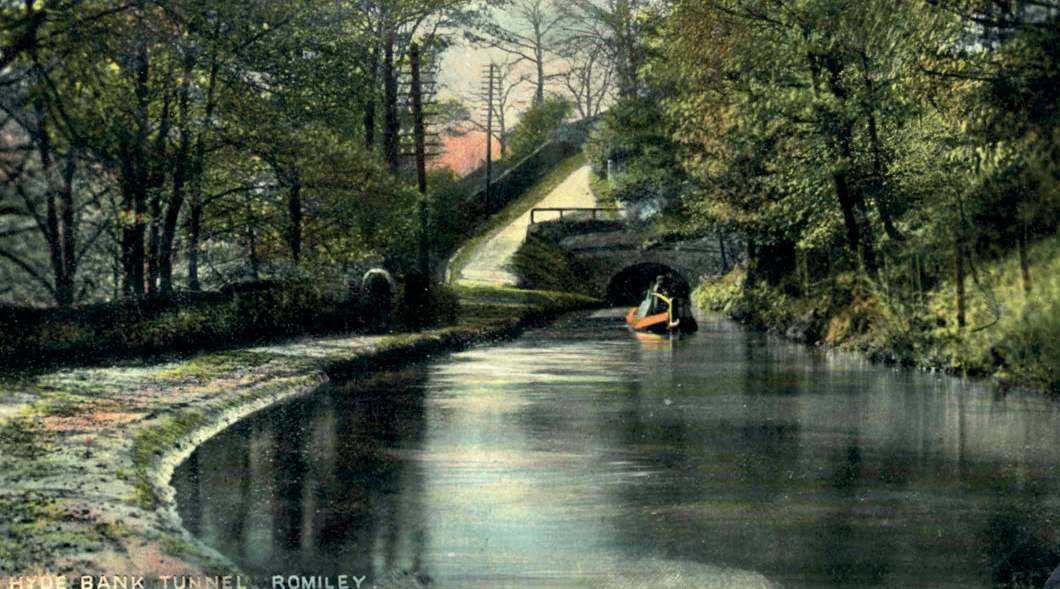 A card by Romanus Publishing Co of Marple, showing a boat about to enter the eastern end of Hyde Bank Tunnel at Romiley – note the horse on the towpath.