This is our sample article from the Summer 2020 NarrowBoat. Clicking the "excerpt" link will show the full article. 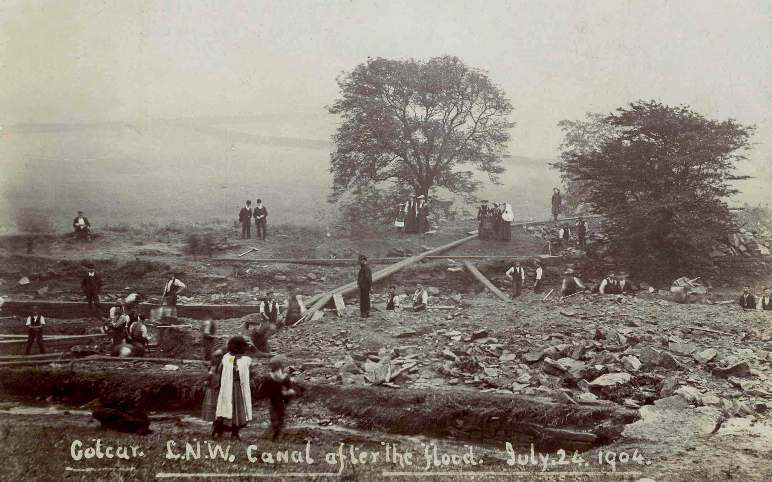 The view from the Golcar side, looking towards Linthwaite. The River Colne flows beyond the bank where the spectators are standing. This card was posted in Marsden on 17th August 1904 with no mention of the flood!

In West Yorkshire we started 2020’s boating season with most of the local canals having been damaged by flooding. One of the less publicised incidents was at Golcar on the Huddersfield Narrow Canal, where a stream flows between locks 14E and 15E. This problem had been developing for some time, with the stretch having silted up progressively since the last blockage in 2012. On that occasion, the dredgings had to be transferred to road transport below Lock 17E, via a field, as access is a big difficulty at this site.

Somewhat more serious than anything in recent years was the Great Storm of 1904. This took place on Sunday 24th July and was a peculiarly localised event, with Marsden, at the head of the valley and less than 4 miles from Golcar, escaping the effects. The storm struck in the evening when many people were at services in the local churches and chapels, where some would be trapped until midnight.

In three hours, over 3½ inches of rain fell. The most serious damage was along the course of the Heath House Brook, also known as the Golcar Brook, which runs under a railway viaduct on its way down to the canal. At that time, Golcar had its own local sewage works, just below the railway, and the flood carried away one of the settling tanks and blocked the canal for about 60 yards. As a result, the water breached the towpath between the canal and the dam at Ramsden Mills, which stood adjacent to Lock 14E, for a distance of about 6 yards.

According to newspaper reports, the ‘canal company’ (at that time, the London & North Western Railway) had over 60 men employed on repairs. Just as in the case of the Barnsley Aqueduct collapse (NB Spring 2020), many postcards were published of the damage across the local area, including the canal, of which I have six. I have seen others but ‘disasters’ are priced highly by many dealers, and there is a limit to what I will pay for very similar views. Only one of the cards has been posted, the others presumably having been kept as souvenirs.

A view from the towpath, looking up the canal. Again, there are a number of spectators among the workers, and it is difficult to say which category the two lads in the foreground belong to. Today, access to this area is very difficult, apart from by towpath, due to the growth of trees and other vegetation. 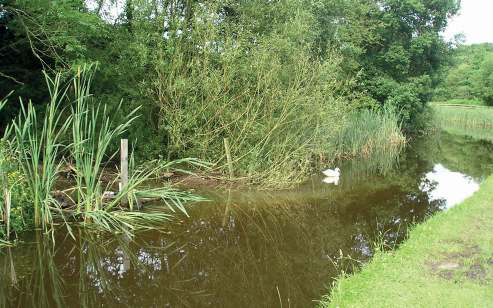 A view of the last blockage in 2012, showing the change in the canal’s surroundings. The duck is actually standing in what should be the centre of the channel.