Chris M. Jones looks at traffic on the Leicester Line in the early 1900s.

This is our sample article from the Spring 2020 NarrowBoat. Clicking the "excerpt" link will show the full article. 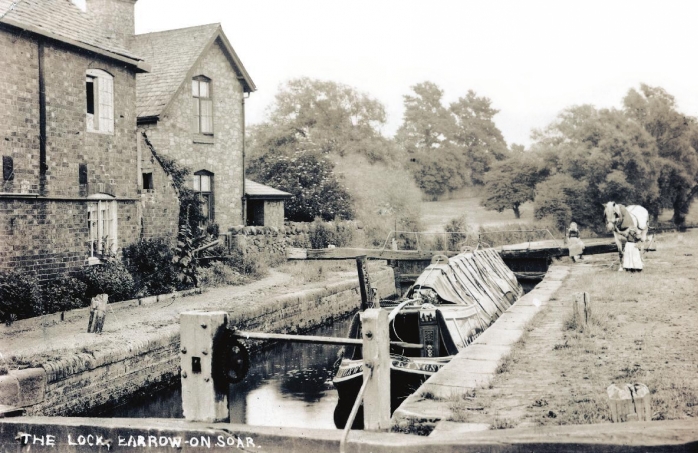 This early 20th-century image shows Fellows, Morton & Clayton’s horse-boat Kingswood ascending Barrow Lock on the Leicester Line, which largely follows the course of the River Soar. The lock is situated just a short walk from the centre of the village of Barrow-on-Soar.

Kingswood was built by and for canal carriers FMC in January 1901 at its Saltley Dock premises, near Birmingham. It was a wooden craft costing £160, built with a fore and aft cabin, which were both registered at Birmingham on 22nd February of that year.

This postcard image was franked in 1918, although it dates from much earlier. Kingswood shows up in two inspections: in December 1912 and February 1913 on the Erewash Canal at Ilkeston, with J. Cresswell as its master. From the surviving records, it seems the Cresswells were the only boat family associated with the craft while it was in FMC’s ownership.

James Cresswell worked the boat with his wife Ann and two of their daughters, Elizabeth and Phoebe; photographic evidence suggests that it is Phoebe on the balance beam and Elizabeth with the horse in the picture.

It appears Kingswood was part of FMC’s northern fleet, carrying a multitude of general cargoes between Nottingham, Wolverhampton, Ellesmere Port, Liverpool andManchester. It is likely the boat also carried for the southern fleet, when needed, transporting cargoes between London, Birmingham and Nottingham.

Just about every sort of goods was transported and crews needed to be very experienced to tackle the Leicester Line as this end of the trip was over two river navigations: the Soar and Trent. The family have a large horse as their motive power, which would give them the confidence to tackle these rivers in times of flood. In addition to the crossing between the Soar and the Trent at Trent Lock, there was also the southbound journey from Nottingham to get along the Trent, against the current, from the Beeston Cut to the Cranfleet Cut.

Coal traffic formed a substantial part of the southbound traffic through Barrow-on-Soar with destinations all the way to the Home Counties on the Grand Junction Canal. This was mainly handled by various carriers and independent boatmen with their own or hired craft, although FMC would also have carried coal using its older boats that no longer were suitable for general goods traffic. FMC’s wharf at Uxbridge was its main coal depot.

One traffic that Barrow-on-Soar is especially associated with is gypsum, which was used in the production of cement and plaster in the building and manufacturing industries. Milling of gypsum began in around 1870 and, although there were other industries in the locality, such as lime and concrete works, they were connected to the railways.

From 1907 there was a regular traffic from Goodacre Brothers' works at Barrow Mills to the Oxford Portland Cement Company works on the Oxford Canal at Kirtlington. This was sometimes carried as a backload on boats that had transported cement for customers in Leicestershire. Another regular destination was plaster to Colthrop Mills, Thatcham, on the Kennet & Avon Canal for paper manufacturers John Henry & Company. One of the main problems with these two destinations was potential delays due to floods on the River Soar and, in the latter case, the River Thames. It was not unknown for boatmen to hire warehouse space at Oxford to store the plaster while they returned to Barrow for another load to save waiting for water levels to subside. The Brentford carrier Emanuel Smith used motors and butties to carry out the trip to Thatcham, and, in one case, on the return trip to Reading he loaded flour for a trip downstream to London. Both these destinations for gypsum and plaster were under intense competition from the railways, which eventually gained the traffic.

Fellows, Morton & Clayton kept Kingswood for all its working life, after which it was sold to boatman Harry King of Main Road, Glascote, in January 1927 for £32.10.00. He bought it as a houseboat for his daughter Rose and son-in-law Joseph Garrett Senior, and it was registered at Tamworth on 4th June that year in Joseph’s name. He worked for Barlows Limited on its day-boats.