Post-War Boating on the Grand Union

Picturing the Past: NarrowBoat, Winter 2019

In the mid-1950s, Julian Thompson took a number of photographs of working boats on the Grand Union. This selection captures the penultimate decade of carrying in the south Midlands

Below: On a damp, dreary day in November 1955, Samuel Barlow butty Mosquito and its unidentified wooden motor are exiting Raven’s Lane Lock 54 at Berkhamsted. Through the arch of Bridge 142 is Lock 55 which, together with Raven’s Lane Lock, formed what boaters referred to as ‘Sweep’s Two’. The butty was built for the Grand Union Canal Carrying Co as Spica in 1935 and when it passed to Barlows in 1943 it was named after a WWII aircraft. This image captures the moment where the motor’s steerer is leaning over to grab the snatcher, or short towing line, from Mosquito’s fore-deck to place it on the motor’s towing stud. Barlows was carrying coal to several works on the southern half of the Grand Union at the time; notably from Coventry Colliery to Kearley & Tonge’s jam factory at Southall, and, to a lesser extent, from Newdigate Colliery to Colne Valley Sewage Works. 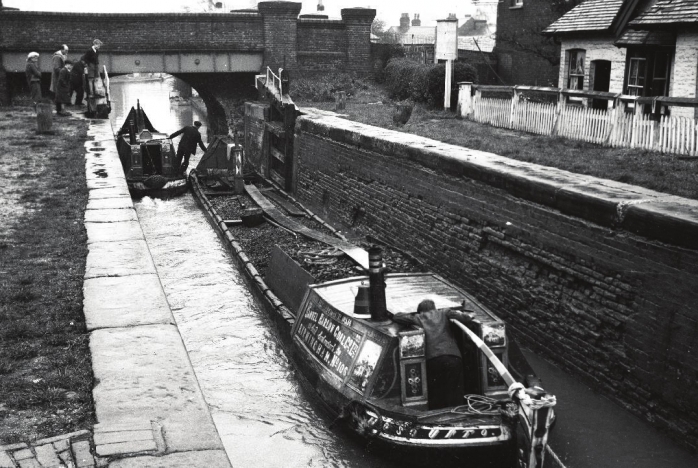