After a slow start, the decade following the opening of the Manchester Ship Canal in 1894 saw major changes as industries and transport providers adapted to, and took advantage of, the new facilities available in the terminal docks at Manchester (which were mainly in the adjoining borough of Salford). The extract shown is from a map dated 1903, one of many issued by the Manchester Ship Canal Company to promote and generate trade. It is particularly useful in showing not only the company’s dock arrangements but the names of the firms that had been attracted to the new Trafford Park Industrial Estate by the proximity of the docks, which was also conveniently situated on the Bridgewater Canal. All the major railways had by then made dock connections, and there was access via the Rochdale, Ashton, and Bolton & Bury canals to most of Manchester’s industrial hinterland. Hulme Locks (top right) had joined the Bridgewater to the River Irwell in 1838 and provided a route down i… 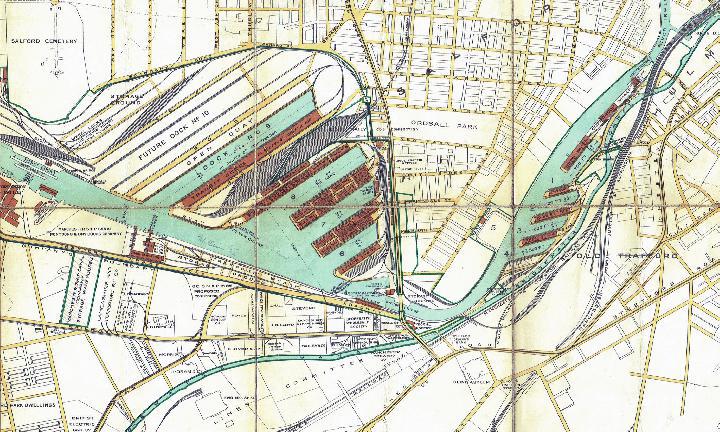